And the Strawberries? Finally...

We know that life is essentially a series of loops, and if you stand in one place long enough,  life will eventually swing back around and tap you on the head, as if to remind you of the continuum.  Certainly it holds true in fashion: all those cruddy double knit leisure suits of the 1970s will come back into vogue in some scary time in the future. In politics we know it occurs too, and today, in the middle of a John McCain event in Florida, I was suddenly awash in memories from thirty four years ago. 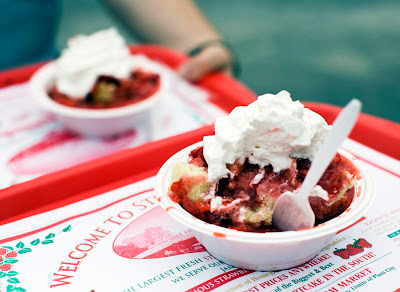 Shortly after the death of French President Georges Pompidou in the spring of 1974, the French, in a move atypical of much of their society, held a disciplined and hurried up election to determine his successor.  And while the campaign would be marked with ‘conversation’ (say it with a French accent) there would nonetheless be quite strict time limits on the duration of both the first and second rounds. (Typically, with many candidates running in the first round, no one would win a majority. The two top finishers move to the second round, and the winner of that head-to-head would be the new leader.)  Each round would last two weeks, with a wonderfully Gallic touch: the Saturday before each of the electoral rounds was to be a day of reflection. No candidate could campaign or participate in any kind of public meeting, speech, or rally.  A day of repose, not to be sullied with actual politics. What it led to, happily, was a world-class Lunch, full of rich journalistic humor, and great wine. I was fairly clueless about the fabulous side of truly French food and wine, and those Saturday's were real seminars in what to order, and how to consume it. Clermont Ferrand, the city closest to the country village home of then Finance Minister Valery Giscard d'Estaing was in the central part of the country, and profited from a vast array of wonderful goods to prepare great meals. Of course you had to know what to do with them, but I can assure that in the 70s, then as now, the Hotel-Radio restaurant was the kind of place which was well worth a detour. Through Gamma, the French photo agency I was working with, I managed to secure a position as the semi-official photographer for Giscard's campaign. I was paid a minimal fee (or rather Gamma was) but the important thing was that I was given the opportunity to get close to the candidate, even to the point of travelling on his charter jet. It set a standard for covering campaigns which is seldom matched today. And those Saturday lunches were something to behold. I remember being advised by Paris Match photographer Jean-Claude Sauer, to pay attention to the wine. We were served a 1966 Haut Brion.. and ever since then, I have tried with little success to bring more Haut Brion into my life. And as with most things, it would have been Genius to have spent a couple of hundred bucks for a case or two, and put it away for twenty years. But let's face it, most of us only see decades later the intelligence of such investments. Sauer, always nattily dressed and fresh from some US Magazine type of weekend (“I was hunting grouse with the King of Spain...”) knew not only a good picture, but in getting that picture, he embodied the real soul and essence of a Frenchman as opposed to his more Anglo-like American counter parts (i.e. Me.) 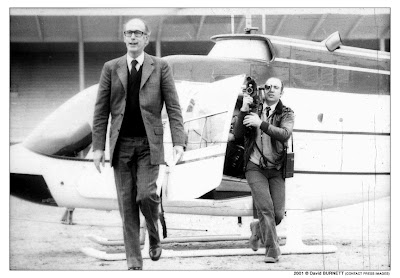 Giscard being pursued by cameraman Raymond Depardon, 1974
Once, in a conversation with Francois Lochon, a photographer who started in the archive filing area of Gamma, rose to photographer, and later to partner in the company, tried to explain the difference between a French news photographer and a Yank. “Zee American guy, he measures ze light, carefully sets the exposure on his camera, aims with great precision, and takes his picture at ze perfect moment. His picture is well exposed, perfectly sharp, and yet lacks any soul or feeling. Zee French guy holds his camera up, not so steady, unsure of his exposure.. and when he snaps it, is usually sous-ex, flou, et bougé...[under-exposed, blurry, and out of focus..] . but he shoots at ZEE moment.. “ There is a great deal of truth here. Sometimes it is the technically flawed image, full of emotion and raw visual power, which brings a feeling home to the viewer in a way that a perfectly exposed, well focused image of a lesser moment might not.
So I was one who sought those pictures of the moment, even if it didn't always succeed. I kept trying to be open minded enough to learn the Gallic ways. And the French photographers I was working with could not have been any greater friends. Sauer, with whom I often travelled (Paris-Match was THE picture magazine, and seen as a key outlet for any politico), was often relegated to the same 'kiddie's table I was at the pre-rally dinners. We would arrive at a beautiful home in Strasbourg, Lille, or Dijon, the personal palace of a local dignitary whose position in the party made him the honored host. More than once the lady of the house would invite us to dine on “just a little something which we would like to offer you”... a buffet of untold beauty and taste. Being a spring election, many of the dinners were finished with plates of locally grown strawberries, bathed in some perfectly matched wine or zabalione sauce. Inevitably, Giscard and the other VIP's were served first. It usually took a few minutes before the waiters could find their way to the table of lesser dignitaries at which Sauer and I always sat. And by the time the strawberries would arrive, Giscard, having finished his, and being slightly antsy about any tardiness at the rally, would stand up, thank the host, and head for the car. Jean-Claude and I never got to lay a finger on those perfect strawberries. To this day, I can see the plates of red, arriving at my place just as I had to split. Like ships passing in the night, I never got to lay a finger on even a single berry. 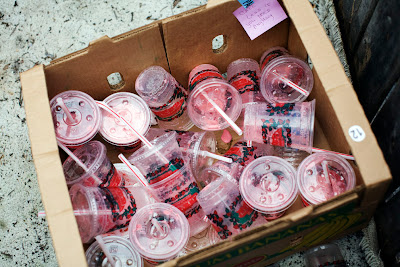 Friday, 34 years later, I think I finally made up for it. Travelling with the McCain campaign though central Florida, a stop was made on the “Joe the Plumber” tour, to speak to the owner of Parkesdale Farms in Plant City, a “small business” who was presumably on McCain's side when it came to new tax policy. After we escorted the candidate to a table of businessmen, and performed that supremely ill-named task which describes a quick picture or two (somehow that act has become known as a “pool spray” referring to the a) small group of photographers, and b)the quick 'spray' like manner they have to work in just a few seconds to come up with a picture.) Once back outside, we lined up to buy the Official Parkesdale Strawberry Short Cake. At least a dozen of us jumped in, a gorgeous pyramid of cake, berries, and fresh whipped cream our reward. The berries were amazing, the cake perfectly saturated with strawberry juice, and the whipped cream, well... good enough to eat. And then some. Moments later, the staff came by with 16 ounce cups of Strawberry shakes.. the perfect chaser for the shortcake. It was a supreme fruit moment, and it slapped my brain around for a minute, until I realized that it was the taste of those berries which reminded me of the calamity of the '74 Election. Many votes then, much cheering, but no strawberries. These tasted about perfect, and all of a sudden the 1974 Strawberries were a thing of the past. Part of my every'couple'of years of dealing with an election here or there. The good news is, we're still in strawberry season, and you can grab a box, pour some cold red wine over them, slice them up, throw on some whipped cream (no, I didn't say Cool Whip) and sit down and watch your favorite political commercials on TV. One of the imperatives, as I have said before, is that we photographers need to actually BE somewhere in order to take a picture of it. We need to see things as they are. And once we've done that, there should be a few minutes alloted to strawberries. Let's be honest. If all the power brokers around he world could partake of those purple and red beauties, well, it can't hurt. We're just sayin'....David
Posted by Iris&David at 11:51 PM

Should The top management of the Public listed company be responsible for the company performance, eg company nearly get wind up?

Are you a Partisan?