When we were kids my Grandparents had a summer place in Long Beach NY. I’m not sure if they rented or owned the house and I’m not even sure it was always the same house, but my mom and I would stay there during the week and my father would come on weekends. Actually, my dad may have come from the city every day but different people have different memories about it. The one thing that is consistent is that some of my best memories of my dad are when we played on the beach. 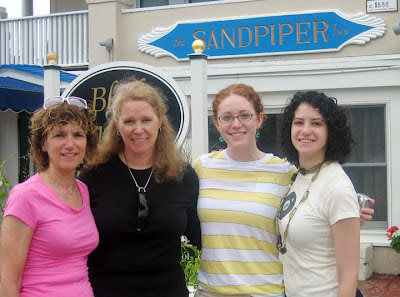 At the Sandpiper this weekend...

I loved the sand and the water and the bigness of each. In my small child brain, I thought they went on forever. As with any small person, I thought a lot of things went on forever—like friendship, family and good health. It’s too bad these very important things seem to have a finite quality most of us don’t consider. Anyway, I loved those days with my dad. He would share stories and dreams and he inspired me to do things I hardly knew about at the time, like visiting the Taj Mahal, something he dreamed about but only got as far as North Africa during the war. He never made it to India. 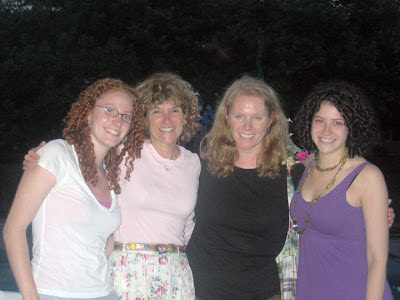 Done Up for Dinner

My guess is that my love of the beach is a direct consequence of these times with my father. The years passed and my Grandparents stopped going to Long Beach. But when we moved to New Jersey, my cousins liked to go to the shore and I sometimes tagged along. As a teenager many of my friends went “down the shore” in the summer to work as mother’s helpers. There were no Au Pairs then because no one knew you could import foreign young people to baby sit and do domestic chores. So there were just plain old American mother’s helpers. I didn’t work at the shore. I worked at the family handbag factory packing and stacking bags. I had started out in the office but I got tired of filing so I merely threw away the files, and my uncles, who wanted to kill rather than fire me, just sent me to the factory. It was not an easy job but the people were friendly and kind and, because I was the boss’s niece, they were especially generous with their help.
But I’m getting off the subject, what else is new?

I was allowed to take two weeks off from work near the end of the summer and so I made arrangements to visit my grandmother, who was staying at a hotel in Asbury Park. My Grandma Sadie spent winters in Miami. She actually lived at what now is the Delano, ( a very chic boutique hotel) but was then just a place where older Jewish people sat on the porch and kibitzed about their health. My Grandmother also entertained the residents. In the evening she would take the stage, sing, dance and tell jokes. It was not a paying position but she loved it and they loved her. I actually got to see some of her performances, but my Auntie Irene, her daughter, never got to see her in action. We still can’t figure out why she was not permitted the experience and it was too bad because she was a hoot. Back to my vacation. 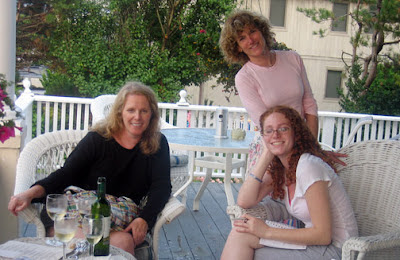 Kerry, Iris & Clare, on the veranda

Grandma had two beds in her room. I slept in one. And I must say, she was not a pain in the neck about my comings and goings—and the goings were with great frequency. My pal Joyce and our friend Vicky were both working for rich families. We didn’t understand why Vicky was working because she was extraordinarily wealthy, but she had a job. Unlike Joyce, Vicky did not live in. She had her own room at a girls’ boarding house. Now that was very cool. None of us had ever known a 16 year old friend who had her own unsupervised place—especially at the beach.

We were a pretty wild crowd for those days. The girls would work during the day (I would tan with a reflector), then we would meet up at some appointed spot and either go to someone’s mansion in Deal, N.J., or we would go and sit on Davey VanNote’s porch in Allenhurst, (then a blue collar suburb of Asbury), and we would scream derisions at the tourists. I met Davey years later during the Carter campaign and I remembered him as being much taller but no less funny. Eventually, we would make our way to some venue which included beer or liquor—no one drank wine in 1962. It didn’t matter, we drank and drank and on more than one occasion I stayed at Vicky’s rather than make my way back to Grandma’s. As long as I called she was OK with it, and there was only one occasion when I was so looped my friend Davey dropped me off at another girls’ boarding house where I slept on the floor until about 6am and then made my way to Vicky’s. Grandma was very understanding when I explained I had tried to call but the hotel wouldn’t put me through—she didn’t have her own phone—no one did. 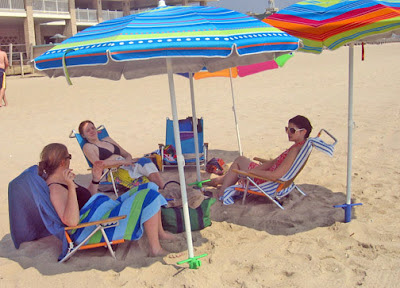 Those summers were fabulous and my love for the Jersey Shore continues. A year or so ago Jordan and Clare had left for school and Kerry suggested we spend a weekend at the shore. I thought that would be terrific—it had been much too long between trips. We found a B&B in Spring Lake, had a fun weekend and decided to go again and this year take the girls. Which we did this weekend. We stayed at a lovely Bed and Breakfast called the Sandpiper Inn in Spring Lake. The rooms are beautiful, the beds are comfortable and there is a refrigerator in every room. They have a swimming pool - which is nice if the weather is bad at the beach, and there is a great restaurant in the inn, where you can actually order take-out, and enjoy it on the veranda. Along with breakfast there is a daily tea, free water and sodas, yogurt, cereal bars, fruit, and juices. They have dishes and glasses and in the morning before the actual breakfast you can have coffee (the decaf was sensational), in the “living room” a lovely well appointed common space. They have got it together and we will surely go back. 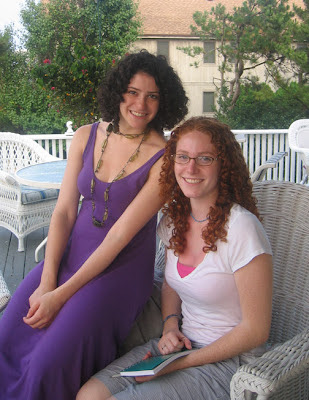 Jordan and Clare - the 'Veranda Portrait'

The beach and the ocean remain very special to me. When I walk along the shore I can still see my dad running ahead and I still hope I will. I know there will never be another chance for me to catch him, but when I’m with my friends or with my family, I feel like he’s still there waiting for all of us to duck through the waves. We’re just sayin...Iris
Posted by Iris&David at 4:43 PM

Hello !.
might , probably curious to know how one can make real money .
There is no initial capital needed You may start to receive yields with as small sum of money as 20-100 dollars.

AimTrust is what you thought of all the time
The firm represents an offshore structure with advanced asset management technologies in production and delivery of pipes for oil and gas.

It is based in Panama with affiliates around the world.
Do you want to become really rich in short time?
That`s your choice That`s what you wish in the long run!

I feel good, I started to take up income with the help of this company,
and I invite you to do the same. It`s all about how to choose a correct companion utilizes your funds in a right way - that`s the AimTrust!.
I make 2G daily, and what I started with was a funny sum of 500 bucks!
It`s easy to start , just click this link http://hysomotega.servetown.com/equgowe.html
and lucky you`re! Let`s take this option together to get rid of nastiness of the life

Hi!
You may probably be very curious to know how one can make real money on investments.
There is no initial capital needed.
You may begin earning with a sum that usually goes
for daily food, that's 20-100 dollars.
I have been participating in one company's work for several years,
and I'm ready to let you know my secrets at my blog.

Please visit blog and send me private message to get the info.

Let me introduce myself,
my name is Nikolas.
Generally I’m a venturesome gambler. recently I take a great interest in online-casino and poker.
Not long time ago I started my own blog, where I describe my virtual adventures.
Probably, it will be interesting for you to read my notes.
Please visit my blog. http://allbestcasino.com I’ll be glad would you find time to leave your opinion.