And speaking of politics – in the best possible way -- next Friday there is a McGovern 72’ reunion. It’s been that many years since we tried to change the direction of an Administration and end a war. We also tried to have an impact on civil rights, human rights, women’s rights, and the legalization of some pretty fun drugs—but that’s another blog.

I went to work for McGovern because I believed he would make a difference. The McGovern campaign thought I could make a difference because I was teaching at Boston University and I had a constituency they needed to do random tasks. In my capacity as professor, I was invited to senior staff meetings and I was treated like I knew something. I knew nothing... especially about Presidential politics. I had worked in the Boston Mayoral race in 66’ and did some local politics afterward but this was the big time... or so I thought. I was 25 and that probably made me one of the seniors. Gary Hart, the campaign manager and Eli Segal, a strategist and fundraiser were older – even as a senior I was only permitted to talk to Eli—never Gary. It didn’t matter, it was a great place to because I got to watch the dynamics of a campaign with young and very talented people who had a sense of real purpose and determination-- now a lost political art. Oh, I sound so cynical... and for good reason. 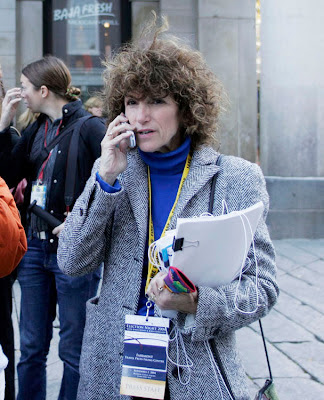 But back to happier times. The 1972 campaign. My schedule was pretty hectic. I would go to BU, teach my classes, go to McGovern HQ, get yelled at by Pat Caddell, go do something important, like a mailing, maybe attend a meeting to discuss delegate strategy or what were the best ways to avoid the draft, do something else important, like make phone calls, and go home to figure out a way to avoid making dinner. Sometimes I got to do an advance trip for the candidate but girls weren’t readily welcomed on the road, so they usually had to be pretty desperate to send me somewhere. It didn’t matter, we were all part of history. So many wonderful characters and so many of them now gone. I loved the campaign and Senator McGovern and felt sure we were going to win, so sure in fact, that I felt comfortable about the future enough to get pregnant. It was fine except I was three weeks overdue so I couldn’t go to the convention. Anyway, you know the rest. We did win in Massachusetts, but no where else and we ended the war but not for too long a time. Let’s hope history doesn’t repeat itself. And I am one of a few people who does think that there are too many parallels to ignore, between this war and that war.

When I think back there are hundreds of stories to tell and retell—and campaign people do this without hesitating. I recently wrote about the one memory that stands out in my mind on the McGovern 72 website. Although it did not happen during the campaign but many years afterward it was just a terrific example of how some things don’t change no matter how many years pass…..

It was years after the campaign (but I had recovered) and we were taking my son Seth to the airport , to catch a plane to the Caribbean. We were in a bit of a rush because we had read the flight number 1255 as the time for departure, but the departure time was actually 12:30.

When we arrived at the gate I noticed that the Senator and Eleanor were also on the flight. I felt reassured that Seth, who was only 8 and flying alone, would be well taken care of with Mrs. McGovern on the plane.

It got to be about 11:45 and they had announced that they would begin boarding in just a few minutes-- at which point the Senator left the boarding area. At 12:00, when the boarding had begun he had not returned. At ten after 12, Eleanor came over and asked if I would go look in the Men;'s room for the Senator. It was as if nothing had changed in the eight years since the campaign. I went into advance mode and actually walked into the men's room to collect the Senator. He, unlike the other 5 men in the bathroom, seemed not even surprised to see me. "I guess you need me to come with you" he said, as if we were at some big hotel event. "Yes sir" I replied. "I don't thinkl they hold your plane anymore".

He just laughed and said, "Things don't always change for the better." And off we went with me in the Lead and he shaking hands up until the departure.

You forgot to mention the fact that the Senator was fascinated by my array of GoBots...you know---the precursor to Transformers.
Love
Seth

David
Just a visitin'
I wish I had more time to read your blobbings as you both write so well of important and delicious things as white peaches and malt ( I have sworn off the latter for reasons obvious to the middle-aged). Am just so behind in reading and attending to non-virtual stuff. Not to mention the mixed media book I hope to publish, (at this rate, posthumously). It would seem as though you are a diner fan? I have just returned from the Deluxe Town Diner in Watertown Mass. Owned by my eccentric friend, Don Levy, this place has great kobe beef burgers at half the price or more than they are in NYC. It also has the bestest sweet potato pecan pancakes ever (sworn off). If you ever come this way I will take you there for the meanest breakfast served all day.
What this has to do with photography depends on one's perspective.
Cheers-
Tessa-xhausted from biking the Cape Cod Rail Trail ( a very terrific thing to do)