Aboard the Acela Express, DC to NY:

You sometimes wonder what will tap your fancy when you start to blob. There are, of course a million things to write about in this lunatic world of ours. Whether it’s the Snowman asking questions on Youtube’s CNN “debate”, or another quite unbelievable story of the latest Administration blunder. Today’s Washington Post has a piece detailing how political appointee William Steiger (he is at HHS) has stifled the release of a Surgeon General report on what the U.S. should be doing around the world to help in the fight against poverty-based health problems. The name Steiger sounded familiar, and as I read down I noted that he was the son of a former “moderately conservative Congressman” from Wisconsin. Oshkosh to be exact. And the reason I know that is I took a picture of young – maybe three years old --William with his dad in the weeks that I returned from Vietnam in 1972. It was my first assignment for LIFE back in the states “The New Young Turks of Congress” and Bill Steiger, the dad, who had apparently hired Dick Cheney as an intern, was one of our subjects. A lovely guy, who died too young – still in his 40s, I think. The picture LIFE ran was of the Congressman with his little tyke of a son grabbing on to his leg, the kind of grab that every kid has done with every dad. It hurt, almost, to see that the son has become quite the political bulldog, having been charged over the past decade with numerous Republican operative jobs. You just kind of hope that the little kid would have become, you know, someone who brought people together, who worked not so much for political ends as for the kind of apple pie and mom country that we all read about in the fourth grade. Some of the other folks, by the way, in that article included: Bill Cohen (Maine), Joe Biden (Delaware), Jack Kemp (NY), and Wayne Owens (Utah). 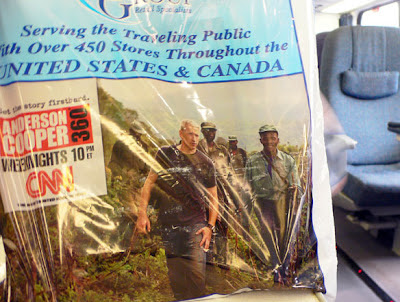 The Actual CNN News Bag: News, "that's NOT my bag!"
But in the world we live in, we are not, apparently, going to be allowed such gifts of reasonable behaviour. On the train this morning I was once again reminded of how idiotic a country we live in. Buying a newspaper, I was asked if I wanted a bag for it. As usual I’m schlepping more than I should, so I said ‘yes’ please, and received the Hudson Group Commemorative Anderson Cooper 360 shopping bag. Lucky me. A nice enough bag but one which has emblazoned on it the irredoubtable Anderson, slogging through the Congo/SierraLeone/Liberia countryside with a half dozen escort/helpers/FreedomFighters/porters wearing that perfectly fitting black Armani t shirt. (He wears the t-shirt, they of course wear fatigues.) It got me to thinking about the wonderful marketing opportunities which Bill Paley miss handled. 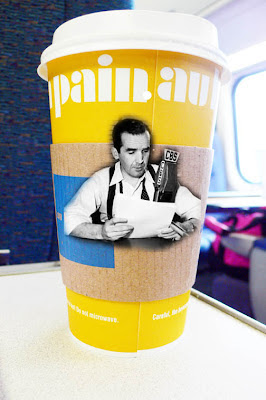 Makes Perfect Sense, No?
What a lack of vision. What narrowmindedness. Anyone with half a brain could have seen that putting Edward R. Murrow’s likeness on an Au Bon Pain coffee cup would have given him so much more market exposure. What was Paley thinking? 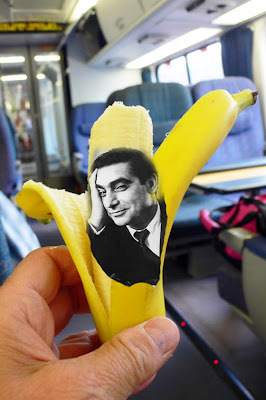 And it makes you wonder why neither LIFE magazine nor Magnum, ever licensed Robert Capa’s picture to put on, say, a banana. In the world we live in, it makes sense. Nothing like getting that face out there 24/7, is there. Did I mention that if you buy a book at the Hudson newsstand, they give you a bookmark with Anderson Coopers face on it? Well, what can I say: it makes me nearly physically ill to see that this is what my dear profession has become. I think however that it behooves some young smart lawyer to find out just where Anderson's picture was taken, fly to Africa with a video camera and a stenographer, and interview the schlepper/porter/FreedomFighters in the picture with Anderson, since I doubt – and I don’t think I’m going too far off base here – that they have a signed a model release and were paid a fee for having their photographs (likenesses is the Legal term for it) used to promote and market CNN. My colleague at Contact, Bob Pledge, suggested years ago, and perhaps we should have just done it then, that we travel the second & third worlds finding people who, because the suits in NY or Washington never felt an obligation to treat them fairly, ended up in all kinds of advertising schemes, none of which would have been thinkable for a domestic subject, without a signed Model Release. 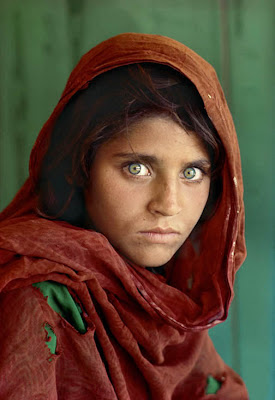 Steve McCurry’s picture of the Afghan girl was perhaps the most famous of these: the haunting blue eyes, taken in a camp as part of a bigger reportage, and as he didn’t have her name she became the iconic, nameless beauty of a refugee, only to be found nearly twenty years later. A good attorney could have easily wrangled a seven figure settlement from the Geographic, as they had used her image on everything from advertisements, tip-ins [the annoying little subscription cards that fall out], posters, the list just goes on and on. But as there is a feeling that the subjects will probably never see the final product, these things sometimes go through without the usual vetting you would have if it were a more domestic subject.

But, as Iris says, that’s not what I want to blob about today:

Yesterday I finally got into the car and headed north into Maryland, to meet with BlobCommenter #1, and old pal, Walt Calahan. Walt and his wife Donna – a wonderful sculptor, live in a little pocket between DC and Baltimore, on a lovely farm they moved to about 3 years ago. 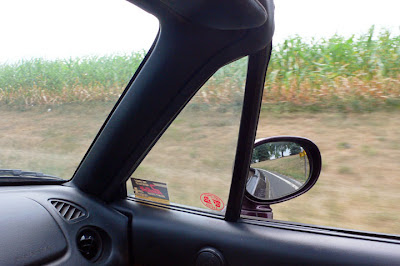 Walt is constantly having to update all the things that break and go bad over time in a country environment (the fences, the tractor paths, etc etc) and yet he still finds time to muck about with silly old cameras the way I do. In additon to all this, and perhaps most notable of all, he reads every damn word that Iris and I write on the Blob. Well, after threatening to visit for a year, I finally hopped in the Miata and made my way north. 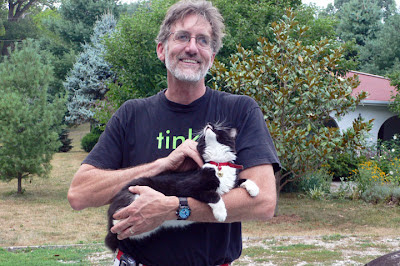 An hour later, there we were, in the middle of 8+ acres, paced by three “can’t wait to jump into the creek” hounds, and one colorful, Tuxedo like cat named Zippy. I got the cook’s tour, and I must say – even though he doesn’t have dozens of acres under cultivation, or two dozen horses to look after (just 2 at the moment) the stuff to required to keep the place moving and running is seemingly without end. Hats off to Walt and Donna for making the Greenacres move. 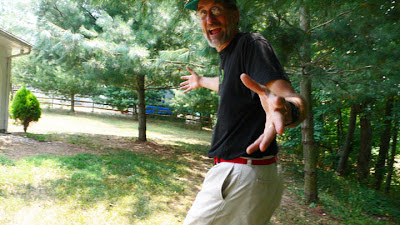 Yet, it’s true, when you look out over the pasture from his office window, you can understand the attraction. 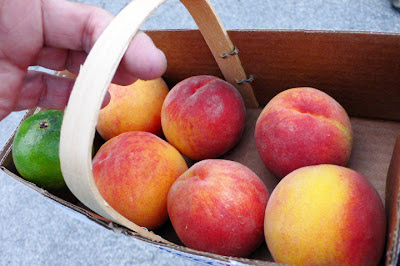 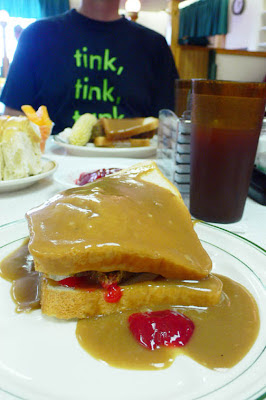 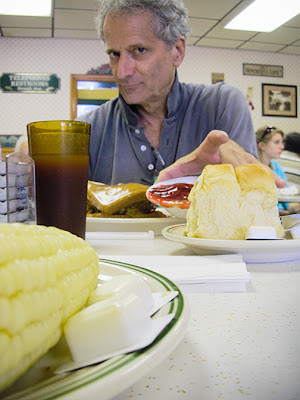 That, and the ability to be at Baugher’s country café in about 12 minutes. This 60 year old establishment, which is an offshoot of a large family run farm in the area, features “home style cooking’ and from what we could tell yesterday, plenty of folks who are in need of a “home style cooked” meal. The peaches looked good enough to take home ( ¼ peck for $4.50 and of course I left the basket sitting on the Victrola in the front hall as I raced out of the house this morning to catch the train…)
Meatloaf Special and Me, by Walt

Ours included meatloaf, beets, and corn, topped with bread pudding. It was a very throwback kind of place, and I’m sure if they really wanted to see increased profits on the bottom line, and bigger lines of folks out the door, they could cut a deal with CNN to have Anderson Cooper emblazoned on their menu. Or, better yet, how ab out Wolf Blitzer arriving with your plate of candied beets? 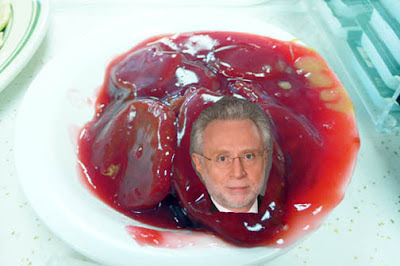 Who knows, soon we might be able to see Anderson 360 degrees without having to turn the damn TV on. Or, maybe that’s what they mean when they call him Anderson 360. What a nightmare vision. You can’t look anywhere without seeing him. Kind of makes you hanker for the Blitz (not the Blitzer), when, if you were over-dosed on news, all you had to do was turn off the radio. We’re just sayin'…David
Posted by Iris&David at 11:04 AM

Oh what 24 hours can bring.

Bought two 10'x20' out buildings today, with Dutch colonial roof lines for more ceiling space. One is for farm implements and the other for hay storage. I can build out little attics with the high ceilings to storing 'stuff.'

Which means 6 wood rakes have to move (that's 4 1/2 cords of nicely stacked split wood) so one of these structures can rest in the very spot Donna thinks best.

You think Anderson Cooper in his dashing t-shirt can help move the wood? Wolf Blitzer just doesn't seem to be a guy who works without a suit.

Perhaps I can sell the naming rights to these buildings?

Hurray I don't have to move the wood.

I don't have to move the wood.

I don't have to move the wood (for now).

Donna changed her mind where the hay storage building is going. A very sensible change I must say.

This just in too.

Man, isn't THAT the truth..and I'll probably run into him in a couple of days..I'll be doing Rev Al in a small town near here;yet another(you guessed it) racial stuff!

Perhaps I should put photo emulsion on my photo vest and expose my image on the rear..

Naah..My image on a media pass is scary enough, as it is...But what the heck?!

Wolf on a side of ham?

Hi Author
You have good blog with nice pictures and details. Please keep on posting the more stuff.