Dick Cheney was the President for two hours yesterday. Too bad it wasn’t 24 hours because then he might have had time to do what he wanted to do—like bomb Iran, wipe North Korea off the map, or pass some laws in the middle of the night banning books in public libraries, except the ones his wife deemed acceptable (she was after all the Chairman of the National Endowment for the Humanities). But that’s not what I wanted to blob about. I wanted to blob about how people, who can’t seem to find their moral core change for money, convenience or power.

Back to Lynne. I liked her then. Well, actually I liked her before then. Here’s a little known fact. Lynne Cheney was a producer for the Mark Shields Public Broadcasting show. Dick was a seemingly good Congressman from Wyoming. I met Lynne when Mark invited me on the show to talk about political Advance and asked me not to look like I was from Washington. “Wear an ‘Iris’ kind of outfit”, he requested. So I wore a 1940’s beaded jacket that looked like something out of “Sergeant Pepper’s Lonely Hearts Club”. It didn’t look like Washington. But the other guest, former Republican advance guy looked Washington enough for both of us.

As is the case with all people who do Advance, we told stories about campaigns and working for the President. Mine were about McGovern, Udall and Carter. His were about Nixon. Mine were funnier. They were so funny that Lynne asked if she could write a piece about me. Of course I said Yes. I love stories about campaigns especially if they include me. We talked a number of times and she wrote the story, which I saw in an airline magazine one day, when I was flying off somewhere. I called her and we chatted for quite sometime. She was friendly and even fun. Can you imagine?

I didn’t see her again until after she was confirmed as the Chair for the Endowment. It was on a plane and she was flying 1st class while I was in steerage. It was like I had the plague—she really didn’t want me to breathe on her. So then I didn’t like her so much anymore. I didn’t know Dick, but he was friends with friends of mine. Apparently, his change came as a consequence of his job at Halliburton. Those tight ass mostly white CEO types have to meet certain expectations -- it’s in their rule book. Like you have to belong to the rich, self important, egotistical, know it all club. They have to find a way to make the most of their powerful positions, often at the expense of the people who work for them or at the least the people on whom their work impacts. I know I don’t have to write about Halliburton and the billions of dollars they ripped off with government war contracts. Despite investigations, the American Tax payer will never see that money again and the Iraqi people will probably never recover at all. But who cares? Cheney’s friends made lots of money and they can buy each other (if they are in the club) expensive Christmas gifts.

Yesterday, when I was relaxing at Kerry’s, my calm was interrupted by a story in the NY Times. It was about how Giuliani is surrounding himself with a team of ultra conservative lawyers and advisers who have set about to make his record, or rather his ‘political positions’ clear. That means that he is now denying all the reasonable positions he took on things like “choice,” and his rhetoric is reflecting his pandering to the Republican base—I’m still not sure I know who they are. Are they the Cheney’s friends? Are they the people who think war is good but funding children’s health insurance is bad? Or maybe they are the people who don’t want to leave “Any Child Behind” but don’t want to help keep them fed with adequate school lunch programs. Maybe they are the Christian Right (remember that great bumper sticker, “The Christian Right is Neither!”?), who think everyone else is wrong. It remains unclear but apparently they must exist in substantial numbers because Mitt Romney is also denying all the progressive policies he advocated in favor of a much more conservative pitch. I guess what I don’t get (and admittedly my ‘I don’t gets’ are becoming more frequent), is how a politician can do a 180 degree change and still expect an electorate to find them believable, yet alone electable.

It’s not that I think people don’t have the right to change their minds. In fact, I think admitting you may have been wrong in your thinking is fine. Like, don’t we all wish that Bush was capable of admitting he was wrong to lie to the American people and take us into a war where the only people who are benefiting are his oil buddies, Cheney’s Halliburton friends—there’s that club thing again, and the Terrorists. But changing your mind about everything that was part of your moral makeup in order to vie for a job, (yes being President is a job) is not fine. And believing that you can fool all of the people all of the time is just plain dumb—unless the people are really dumb—which is certainly possible.

This is much too serious a blob. Let’s talk about another kind of change. Our kids grow up and they change. Over the weekend David and I spent some time with Kerry and her daughter Clare. Clare was an adorable child who has changed into a beautiful smart talented young woman. We also went to a party to celebrate the opening of a play written by Adam, a really loving and funny kid, who has grown and changed into a charming, bright, talented and gifted artist. My son, who was always just a little reckless, has changed into a wonderful father and husband. Maybe change is the wrong word for these fabulous young people. Probably ‘growth’ is a better description. 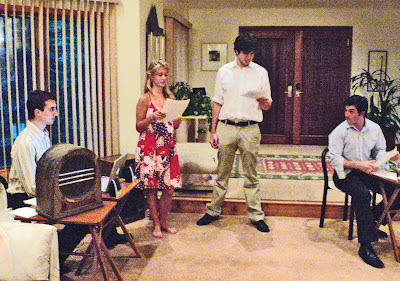 Adam (left) and crew at a run through Chez Lerman
It’s too bad, or rather, unfortunate, that the people who are often selected as leaders don’t seem to understand that change might be good depending on the degree and kind, and that growing as a person is better than changing the person you really are, for the person who you think other people want you to be. We’re just sayin... Iris
Posted by Iris&David at 4:54 PM

Kinda remids me of a recent encounter, which I found myself saying,"I know who you are..but I no longer know you.."

People change..sometimes in the negative sense. Positions and power will do that, will it not?

As an aside, Iris..Have you considered a news blog and sell advertising? You're one helluva writer!