Stand Back from the Red Rope, Sir!

Sometimes when I get into a “why can’t I find time to write?” funk, I realize that I have to just open a new document, and start typing, often not quite sure where I am going. I suppose there are some great writers and commentators who just deal in things as they happen. Certainly that’s why they call it news. It’s not “olds”, it’s actually “news”. And as it IS July Fourth, maybe it's worth trying to think of a few simple things about our society today. Perhaps much of what I write about isn’t “news” but the News is never far from us: for starters, what about the idiots (ooops, I mean our “elected representatives”) in the Virginia Legislature who confirmed their inability to think like normal citizens when they passed a bill quadrupling and penta-tupling the fines for moving violations in a car. They want to raise money without raising taxes – not an easy task, so if you find yourself sliding along with the rest of the traffic, all going, as anyone who opens their eyes now and then knows, over the Speed Limit on a highway, and if you are the unlucky sod who gets nabbed out of the flock (“… Hey, I can’t stop everyone, so I stopped YOU!...” – how bout THAT for blind justice) it will cost you over Eleven hundred bucks. I thought it was bad enough that accidently parking in a Handicap space (and not a very well marked one, I might add) which yielded a $500 fine, was about as un-American as you can get, but the good representatives in Richmond have shown even that bit of bad legislation up. It kills me that for decades our friends on the RIGHT have railed against Washington bureaucrats (much in the manner that I rail against most anyone who has been elected) and never fail to use a phrase like “…these decisions are better off made locally than by some pointy headed bureaucrat inside the Beltway.” Yet there are times when even those pointy headed ones seem to be more level headed than the power-tripped local folks who continue to bring us idiotic local law. Whether it’s the Arlington $500 fine for parking in a handicap space, or the New York City Film Office who now want anyone hanging around with a tripod and camera for more than ten minutes to have a certificate of insurance and a permit to take pictures, you see what I mean. Essentially they must be saying it’s OK that none – yes, virtually NONE of the great iconic pictures ever taken of New York, those which bring the city to mind around the world, would ever have been taken (did Steichen have a a permit from Jimmy Walker a hundred years ago, in the fog off Madison Square? Don’t think so.) 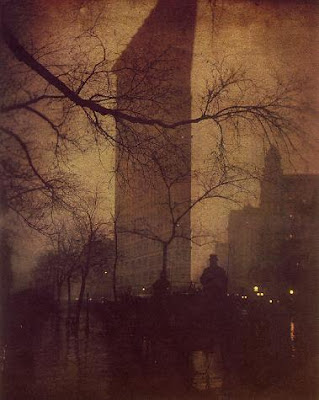 And you see the way it would actually unfold without having to use your imagination too much. Police Officer Soto or Delacruz, or Chin, or O’Malley, sees someone with a tripod, and immediately feels that, since they aren’t busy capturing Bin Laden, the next best thing is to bust some photographer’s chops, a contravention of the law is taking place, and the harassment starts. Well, unless said officer is having coffee, then maybe not. It opens things up to an incredibly uneven distribution and interpretation of the law, and it just plain sucks. The visual world out there belongs to all of us. Pretending that the Film Office owns it is a level of cheek that even a pointy headed beltway maven would find hard to swallow.

Today there is a protest in Silver Spring, Maryland where photographers will gather on the “Main street” of the newly redeveloped ‘downtown’ and take pictures. That, too is a protest. Taking pictures on Main street a protest, you ask? Well Silver Spring in its desire to become a relevant locale again, gave over tons of money (actually Montgomery County did) to a developer to make it all happen. So, Main Street isn’t really Main street, it’s a paved surface which The Peterson Company feels it has to run it’s way, the way of big business in this day and age, the way of controlling everything, and so no Picture Taking is allowed. There have been dozens of moments when their crack security squad, also unable to do much about Bin Laden, but most assuredly taking care of those pesky photo people, have intervened with someone holding a camera, forbidding their shooting pictures. Today, in what one hopes will be a massive turn out, photogs will be walking and shooting their way through the latest abomination of Private Enterprize gone awry. It’s enough to make you want to be a collectivist. Wait, no it isn’t. They’re even worse. (Anyone ever shoot pictures in the “old” USSR, Czechoslovakis, or China. But it seems as if the neo-American rule makers take their inspiration from our Cold War buddies.

So, now and then, just to push back a little bit, stop somewhere that you aren’t supposed to (which is an ever increasing area in our little world these days) and make a few pictures just for the hell of it. In Boston back in April, in walking past the Ritz Carlton Hotel, I spied a red band in the middle of the road, something which was obviously designed to keep intruders out, and it must be working since there have been no Terrorist incidents here. I like the composition of the Red in the driveway and took a couple of snaps from the sidewalk. 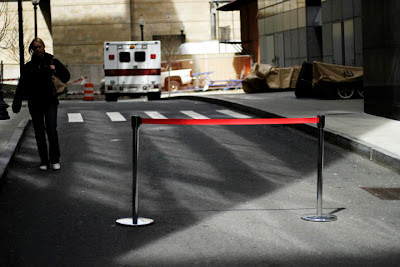 The Famous Red Barrier, seen from a sidewalk

A blue suited security maven, radio in hand came rushing up telling me that it was private property and I wasn’t allowed to take the photograph. 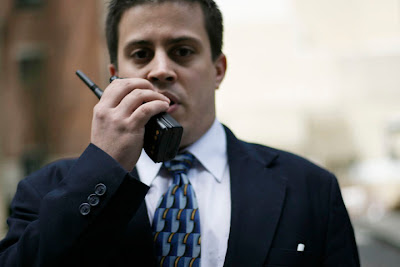 I tried explaining very calmly (Iris thinks I shouldn’t have used the words Idiot, and a 6 letter phrase for copulation, as it made me less credible) that since I was on a public space I could aim my camera anywhere I wanted. The head of security, who basically knew I was right, eventually showed up, and we all made nice, but the point is, you either get to live in a relatively free country or your don’t. Let’s just make our minds up now, figure out which it is, and get to it. I’m getting oh, so tired of all the Security mavens who collect checks but don’t do a thing to make me or anyone else, much safer. My patron saint of the News business, Ed Murrow, is being discussed at a panel in Western Washington state in a couple of weeks -- including Murrow's son Casey. This is the kind of thing which I suppose Ed Murrow would have sunk his teeth into. If you find yourself on the Olympic Peninsula, I suspect it's worth a drop by. So, on this balmy Fourth, Goodnight, and Good luck. We’re just sayin…David
Posted by Iris&David at 1:00 PM

Unfortunately, the security mavens are caught between a rock and a hard place;they're on security cameras watching THEM watch YOU.And chances are..the security supervisor is viewing the monitors at some undisclosed location.

The security officers are more likely to understand 'your' position, rather than management's...But they got to stay employed also.

My God, what on earth are they going to do about camera-totin' tourists that happen to also have tripods? What about accredited journalists,sans NYPD credentials in from out of town?

Stupid,*&#$%!@ laws as that aren't going to make us either warm,safe, or fuzzy. You want to hear about stupid? I was enroute to Texas,crossing Toledo Bend resevoir, and saw a FANTASTIC sun ray out the clouds to the water!! I pop out the vehicle, and there's a ranger telling me I cannot shoot the pic! Sometimes a letter of accretitation and even photo credentials aren't enough..Geez, I didn't know WE were the threat to our existence!? The photo? Gone.Thanks,"Ranger Bob"...

What else is gone? Civil liberties..."In Ranger Bob We Trust"..I feel so much safer now!

In all,I don't blame you for being digusted. Law enforcement is all about discretion, and any officer that doesn't see this as a stupid attack on freedom, in the guise of 'keeping you safe' should discretly turn the commission card and badge in immediately!

Big Bro. needs to leave us alone, and turn on the true enemies of our state, rather than the protectees(US).

Oh, I'm preaching(and I'm far from being a minister)But I agree. It's too far in the name of 'protecting' us.

Thanks for sharing the image, by the way.

No tripods without permits? Hmmm,I wonder how they feel about monopods...

Take care out there among the radio-totin,camera evil-doer haters! Happy Fourth, also..Funny..aren't we celebrating Freedom, or is this just another date of note to visit a beach with no tripod??

Fascism has reigned ever since.

Corporate America now owns us, as they own the regime in the White House.

The Constitution has been put in a nice decorative display, but it ain't worth the paper it's written on.

9/11 was a disguise to convince people that this is all for their good. Not to worry. You're safe with us. Go home and watch TV, or go shop, but God forbid don't think.

Sorry! I misspoke! It was NOT bloodless;I believe you knew what I meant anyway.