There is almost nothing that makes me happier than when my friends or family are successful - except, of course, when I am successful. I’d say “just kidding” but I’m not. The other evening Karen and I attended the ‘reading’ of a show our college friend, Steve Bluestein, wrote. The purpose of a reading is to raise enough money to mount the show on or off Broadway. When Steve called to tell me about the reading he said that he had managed to get Lainie Kazan to participate. Steve is a comedian and always a wonderful talent so I wasn’t surprised. Anyway, the show was kind of our ‘move to New York for the summer’ kick-off and it was wonderfully moving. There are only three characters and all very powerful and painful, so he raised enough money
and they are going to mount the show. Is that great or what?

The next night we went to a Board Meeting for US-UNICEF—my friend Caryl was just appointed as President and CEO. Caryl is one of the world’s most talented creative people. She is the person who brought you almost everything that addressed the issue of understanding individual differences in people including a great deal of the rhetoric in USA Networks “Erase the Hate” campaign and NBC’s “The More You Know”. She worked for the ADL and if they had been very smart they would have given Abe a few years to retire and then put Caryl in his place. But they were not smart and she went elsewhere. So the elsewhere is where we saw her. And she is spectacular because not only is she a good manager and a smart bureaucrat (not easy) she has a vision for the future of the organization. She knows where it needs to go.

Here’s the problem with organizations that become person dependent. First of all the person is often mired in their own status quo. There’s no place for innovation or change. This person comes to believe they are the only person who do a job that needs to be done and only in a particular way. They never leave any room for a new person because they only want the old person—who happens to be them. They never think about the future of the organization or what happens if they retire or die, because basically, they don’t care about anything but themselves—although they are excellent about pretending to care about the future of the organization – they think the organization only has a future if they remain involved. Was this too complicated to follow? OK, well the bottom line is that Abe should have moved over for Caryl or someone young enough to have a vision of the future, but he didn’t. Oh if only some old white men could get beyond their egos. Which brings me to George Bush, but only for a minute. He pardoned Libby. I guess no one is surprized but I’ll bet there are a great many Republicans who are ashamed, And if there aren’t, they should be. 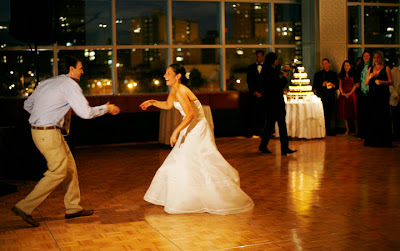 Stephen and Liza hit the floor...

So where was I? Oh yes, in NY for my niece’s wedding – which was incredible. The most fun wedding and series of activities I have ever attended. There were no family politics, no fighting, no hysteria and nothing difficult. Everyone had a great time for what went on for days. A Thursday night greeting party, a Friday night rehearsal dinner, the Wedding and after party, and after the after party, a Sunday brunch, dinner Sunday and Monday night. It was a long time to spend with any family—especially in-laws but it was terrific. Many laughs with many friends as well as relatives. 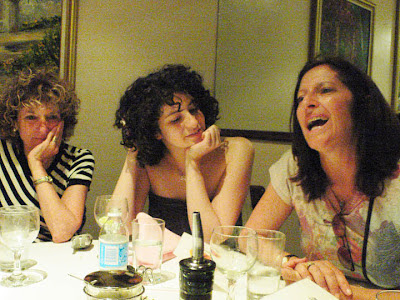 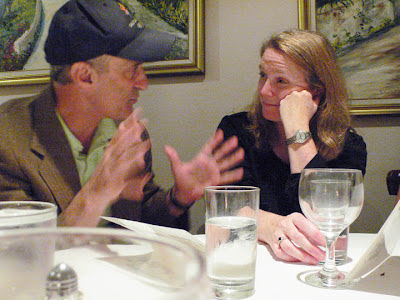 Tom and Kerry at one of our family dinners

One of the high points, from my point of view, was a search for a Saturday street fair. Usually in NY there are two or three 12 block street fairs on the weekends. But for whatever reason, we could only find one piddley fair on 45th street from 6th to 7th Avenue. This necessitated a walk through Times Square on a matinee day—something we try to avoid. But we found ourselves smack dab in the middle. And who should appear but the Naked Cowboy. For some people, Naked is just a cute guy in his underwear with a cowboy hat, but for me he is one of the key blurbers for our “So You Think You Can Be President” book. Clay met him years ago and whenever he or his parents are in Key West, they visit “The Last Flight Out” shop—Clay’s (my writing partners) shop. There we were in the middle of Times Square, making conversation about the book while numbers of tourists drooled at the thought of a picture with Naked. Our encounter was brief but incredibly colorful. What can I say, my friends and family were sorely impressed by the fact that I knew such a colorful NY character. Naked told Clay, at some point that he wanted to be taken seriously—as a person. I thought I might mention that if he wanted to be taken seriously he had to get dressed, but then I thought “live and let live” if underwear works for him, so be it. 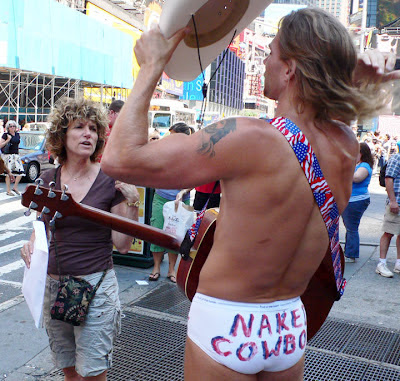 Tonight we went to a nice seafood restaurant and over over ate for the fifth consecutive day. But it was worth it because our adorable server said she was actually an actor (who isn’t in NY?) and when I asked her what she was doing and had done and mentioned that my daughter was hot in pursuit of the same dream, she asked what Jordan had done. It turns out, in this world of ten million people that she was in “Granola the Musical” with Jordan. And she had auditioned for the same role which Jordan got in “Side Show” last summer. I’m not saying that I was proud of the fact that Jordan got the part and she didn’t. We’re just sayin that it was fun to meet yet another struggling performer, who Jordan knew and who aspired for the same dream. And yes, it’s fine that we can brag on. We’re just sayin...Iris
Posted by Iris&David at 7:11 AM