Whenever I hear another Lindsay Lohan story I can’t help but think, “what the heck are her parents doing to help this child?” So? What do you do when your kid is a Lindsay Lohan? Maybe a better question is, why do we care about Lindsay Lohan? No that’s not a better question. The public is fascinated by celebrity difficulties. Here’s maybe a better question. What responsibility does a parent need to take for a child who can’t seem to get themself together? Probably because the parents never got themselves together. I understand that some people who are exceedingly wealthy feel that they don’t have to abide by the same rules as mere mortals. Those people feel entitled to live their lives the way they choose to regardless of the consequences, and the consequences are often that their children, who also are indulged and entitled, frequently behave badly. What is it with people like the Hiltons or the Lohans The Hiltons were known to always be out partying with Paris. Lindsay’s mother took the press on tours of the rehab center where her kid was housed. I think that sending these kids to rehab or jail is only one part of the problem. A bigger part is that their parents seem to be oblivious or in denial about what is happening to the kid, and maybe it is they who need to be rehabed or jailed. But that’s not what I wanted to blob about.

I wanted to blob about indulging in a good way. Like tonight we went to possibly the worst show running on or off Broadway. It was called “Sessions”. The music was terrible, the lyrics were boring, the book was bland, and the actors were ordinary. It was so bad the Jordan said “even though we had comp tickets, I want my money back- or at least the hours I wasted.” Don’t get me wrong, we had a good time but we did it despite the show. The only difficulty we had was that Clare , Jordan and Hannah had trouble not laughing out loud. When I saw their shoulders shaking I looked at Kerry and she mouthed “it’s the lyrics”. At which point I started to laugh. Then the final straw was when they started to sing about ‘fish gotta swim and birds gotta fly,’ and it wasn’t “Porgy and Bess” we knew we were in trouble. But later when we were having drinks and a bite at our new favorite after theater place, Michael Cerveris (big Broadway star) stopped by and told us that “the only way you know how difficult the good shows are to produce, is to see some really bad shows—but not too many.”

We have also started to indulge in things we like to do New York. Most New Yorkers hate the street fairs that take place every Saturday and Sunday on both the East and West side. New Yorkers hate them for their sameness and because they seriously screw up traffic (which I don’t understand because most of my city friends don’t drive) and this is true. But since you know where they are going to be (usually 12-15 blocks on an avenue) it is not difficult to get around them. 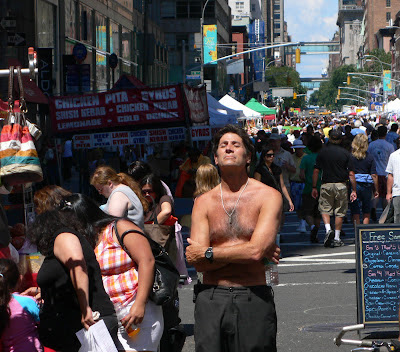 An Actual New Yorker at the Lex Ave. Fair, surrounded by other New Yorkers."

Anyway we love them because there is always something fun to buy, and more importantly, to gawk and giggle at/with. And, yes, while it is true that there are no shortages of t shirt booths, Indian rug merchants, Koreans that want to rub your back, Pashmina like shawls, cheap jewelry, grilled corn and icky foods from many nations, every once in a while there’s a good buy – and you can usually deal with the vendor. 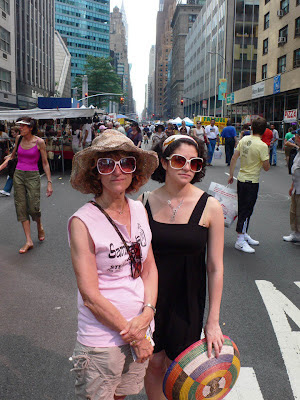 So last week we bought a cute purse for $15 and there was a guy selling “Limited” summer dresses for $10. We bought two of those. 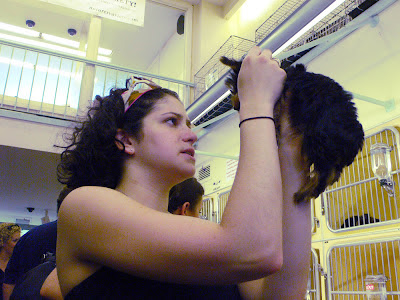 The best thing is passing a pet store and seeing Jordan test drive a Yorkie: "...and I shall call him Moishe"..)
We strut aimlessly up and down the avenue and just watch the people. I find that on the East side you get more neighborhood people and on the West side it’s more tourists—unless the fair is upper West or lower East or lower West—then it is neighbors. Sometimes the Upper West has things like furniture, vintage jewelry and designer knock-offs of pants and dressed. 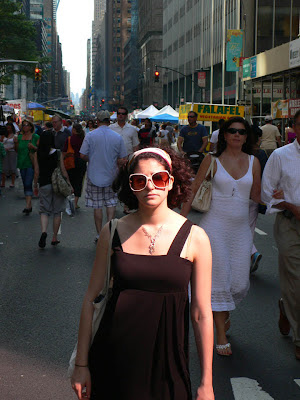 Jordan, at the Lex Fair

I guess what I’m saying is avoid mid-town on the West side because it’s all tourists and they are simply not interesting, nor do they know the rules – we talked about the rules in another blob [Editors note: always remember Rule # 2: Stand Right, Walk Left]. But the products are not really important. It’s watching the people and it is New York where the people are none too colorful. Even Jordan said, “You know mom, it’s New York, so people don’t even notice your nuttiness.” 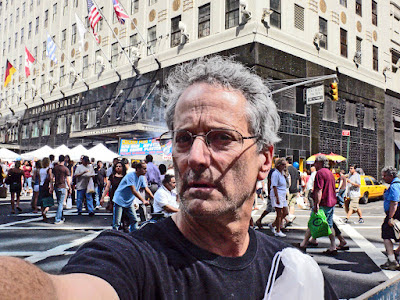 I love how the light bounces off New York windows, and even at Street Fairs, it creates very cool looks. Yeah, I'm the guy taking his own picture on 59th st.!

And speaking of nuttiness, we are about 300 blobs into this. And we have things to celebrate. I signed a book deal this morning for a non fiction political humor point of purchase book which should be out by next January. It’s called, “So You Think You Can Be President”. There will be book parties and readings and perhaps some actual sales. When the time comes I will let you all know and you can spread the word. We are also celebrating my Grandson’s baptism. I’m not sure what that means but a little extra help from God can never hurt. We are also celebrating our niece Liza’s marriage. And we’re celebrating how fortunate we are to have avid readers, good friends, and families who like us – or maybe it’s good readers, families around and friends who like us.. either way it’s all good. We’re just sayin... Iris
Posted by Iris&David at 7:59 AM

Whose that nut on 59th Street?

He needs a Yorkie, not a camera.

And I'm not just "Singing in the Rain."

Congrats on the book, let us Canucks know if its avail in Canada.

Well I acquiesce in but I contemplate the post should secure more info then it has.