I hadn’t visited with my dad for a long time. So yesterday, when we took Jordan to Kennedy Airport for her flight to Israel, we decided there was enough time and it was silly not to go sinc,e he was so close. It was near four when, having waited two hours for a trip authority figure to appear (he did and he must have been at least 16), we thought it was safe to leave. OK there were about 200 other kids and there was no real danger other than being run over by one of the gi-normous (bigger than giant and enormous combined) suitcases that most of the young Jewish princes and princesses packed despite the suggestions from the Birthright Israel staff. 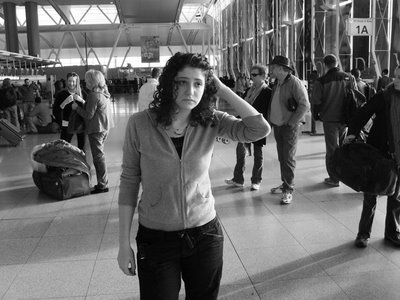 Amid the packing for Tel Aviv

Birthright is an organization that takes kids (18-26) to Israel for free, to discover their heritage. If a child wants to go and find their roots—although our roots are somewhere between Russia, Romania, and Poland and none of those appeal to Jordan—and they have one Jewish parent or can convince the powers that be that their heart is in the Jewish section of the Holy Land, then they can qualify for a ten day trip with everything paid but the expenses they incur for gifts for their parents -- in our dreams. Jordan, being the sensible child we all know her to be, surprisingly packed as suggested. She took one small suitcase and a backpack and she packed an empty duffle for gifts she thought might purchase. Our guess was that the idea of schlepping an oversized bag up two flights of steps, in a not very fancy hotel, was unappealing. And she understood that when traveling with royalty you cannot count on assistance. 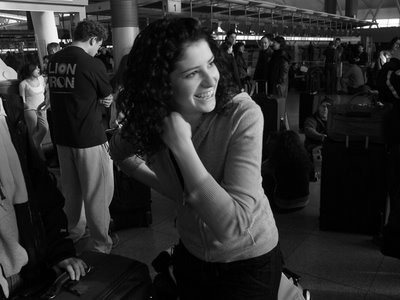 Jordan Kai Burnett - off to Israel


We tore ourselves away before she dismissed us. We might have returned for one final glimpse, but we ran into Katie Whelan, a great friend who we hadn’t seen for months. She and Bill were on their way to Paris for a New Year celebration. We had a nice chat and then it was their time to get boarding passes so said our goodbyes with promises to get together in 2007 and we all went our own ways. Their destination was far more exotic then ours. It was getting close to 4 and the sun was setting but we made a determination to try to get to Elmont before the sun set.

For whatever reason, it occurred to me that Jewish funerals are different than Christian funerals. When Christians die there are all kinds of rituals performed before burial and it is usually days before they are taken to their final resting place. When Jews die they are buried the next day unless it is the Sabbath and then they are interned after the Sabbath is over. As you know, this kind of intern differs considerably from the kind that works in some job for no money, little gratitude, and certainly no permanence. This kind is really permanent. David and I have decided that we do not want to be permanent in the ground. We do not want to have graves because then they are the place where your loved ones think they need to visit. Who needs it? We have decided to be cremated and regardless of who goes first, we want some of our ashes scattered together. I want people I love to have small film canisters filled with my ashes to scatter wherever it is convenient or where they will think of me and laugh. And there are no rules. It might be on a beautiful beach or it might be on a golf course—although I have never played golf. Maybe that’s a place where one of my friends might spend time, needs help eyeing a putt, and wants to feel my presence. For David’s father, Ted, an avid golfer his whole life, we scattered his ashes between the 6th green, and 7th fairway of the Country Club course in Salt Lake. He has an excellent lie.

Anyway, I still feel my father’s presence and I still miss our conversations. He had a wonderful sense of himself and about life. He was totally disabled from continuing degenerative multiple sclerosis. And although he could not move any of his limbs, no one ever thought of him as sick. He had a remarkable ability to find a kind of peace within himself. He spent a lot of time in his head because he couldn’t move his body. He did get frustrated and even depressed on occasion, but he was never uncommunicative or without a sense of humor. Both my brother and I loved our conversations with dad. They were always entertaining and never without substance—even when they were reprimands. I miss those moments and I am not willing to give them up. So whenever we are anywhere near Elmont NY we make our pilgrimage to Beth David and try to find the Lenkowsky family group. 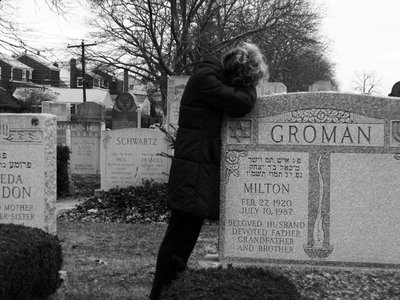 Iris and Milt having a chat

I know I could talk to him long distance – like from my house in Virginia, or from a synagogue wherever, but it’s just not the same as being there with him. And we had lots to catch up on. He said he’d like to be with my mother again but he wasn’t quite ready. And I assured him that we would take good care of her until he was. He says he’s fine, and that he’s been walking around visiting with the rest of the family. They’re all doing very well although my aunt Sophie wants us to stop telling people she’s in Florida—she hated Florida. And he said that 2007 would be a much kinder, healthier year than 2006. And he said that he wanted all of us to appreciate one another and whenever we had a chance, to be sure to tell the people we loved that we loved them. And so to all of you to whom we haven’t had the chance to say thanks for reading us and we love you, we do. We’re just sayin...Iris
Posted by Iris&David at 6:35 PM

Gil Ronen has made a new short film, this one showing Chanukah scenes in Israel. While Chanukah has passed, these wonderful images and the happy sounds of singing children are timeless and a joy the year round. Please help make sure it reaches a wide audience. If you like it, I hope you'll consider posting a link to it on your blog or passing it on to your friends by email.

I have heard it stated in the past..and I take heart to it..that as long as you honour the memory,your friends and family are always there. I was once angered at someone, remarking on my dad's passing, when they said,"That's not really HIM there..his spirit is with God.." Over time..a LOT of time.. I understood this..but you still want 'some' sort of connection, and I understand that..and the decision to opt for non-burial is a good one, so that friends can visit and share really great memories,rather be saddened at a headstone.

What great fun for Jordan, I would be a wreck at the airport, I embarass my son just leaving him at the dorm at college!

I am forunuate to still have my parents with me, and am sure I will need to find a way to have chats with my mom.

I agree; I too would rather be remembered in the happy places!

I have recently got a new laptop with windows 7 and Norton security but within days mystery emails were being sent from my hotmail address seemingly to everyone in my contact list. The email is the same each time. I have ran a full system scan as thought it might be a virus but nothing was found any ideas what to do to stop this? [url=http://gordoarsnaui.com]santoramaa[/url]