I have been a photographer for about forty years (next year is actually my 40th anniversary working for TIME Magazine, as a wide eyed intern) and I have seen a lot of changes in the world of photography, and the technology which surrounds it. There is no question that the last ten years has brought changes to our world that no one could have foreseen (well, perhaps Victor Appleton, the author of the well known Tom Swift science adventure books for the 30s-50s.) The advent of digital photography - you know, where there is Noise, but no Grain in the pictures, has sped up the flow of imagery, and been responsible, I think for some very negative changes accompanying the positive ones. The real down side has been the purchase of speed at the expense of a number of other indices of journalism: thoughtfulness, reflection, pondering, kicking ideas around. In so many realms of journalism, and photoJ above all, there simply isn't time for such niceties. Amongst my newspaper, wire, and now even magazine (make that web) colleagues, speed to publication is the ultimate demand. In the 60s the Associated Press (".. the AP!...) used to say "a deadline every minute.." That was true, if there wasn't one in Istanbul or Perth, there very well could have been in Vancouver, Bogotá, or Niamey. Now, it really IS a deadline every minute. In fact, the events each make their own deadlines: as soon as they are over, bang! Deadline.

So, it was with a good bit of historical levity, and appreciation that I opened a box this week -- another eBay purchase. I'd heard there was a military collector in New Jersey who landed a set of 200 World War 2 recon cameras: the K-24, a beauty which used a big (5.5") roll of film, my favorite old/new lens, the 7" Aero Ektar (it would have been silly for them to call it the Airo Ektar, right?), and an electric motor which would take 3 frames a second while dodging German flack. [The Germans made a great version.. the LuftCamer which no doubt was dodging Allied Flack). The cameras were selling for about $200, and I couldn't resist, having been the "inventor" of the Burnett Combo (the Speed Graphic and Aero Ektar lens). I didn't really invent if of course, but I think I am the first guy to have a cover of TIME magazine with it. I came late to the 4x5" press camera world. It flourished in the 30s through the 50s, when it was finally overtaken by 35mm. But as I discovered in the past few years, there is a charm to shooting SLOW, and knowing you only really have ONE chance to get a picture. It changes your attitude, big time. You become quite good at Mulling. At considering. At pondering. You want to get it on that first frame. And as part of that change in point of view, I wanted another MINT, clean, ready to go Aero Ektar lens, and figured this camera was the key to it. I ordered the camera, and it arrived earlier this week; as I opened the outer box, it was if Jumanji was arriving in the studio. There, stenciled onto the side of the original box was the info about the birth of this camera. In that great military-speak: 1 Camera,Aircraft type (they are NOT kidding about that!) with 7" lens. 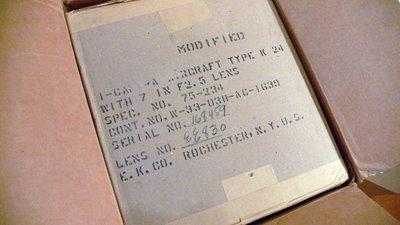 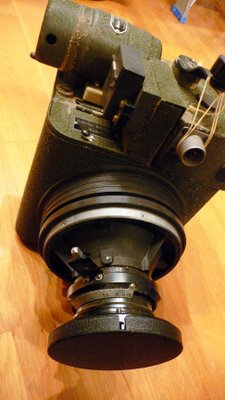 In all its Beauty, and, yes, Weight!

I was disappointed not to get a 1945 model, but I suspect most of the later ones are already gone. This lot of cameras had been sent to an east coast depot, thence to go to Europe. Then the war ended, and they remained for sixty years in storage. Opening the box was a treat . A LOT of corrogated cardboard, and underneath, a barely liftable olive drab behemoth. The K-24 in all its glory. 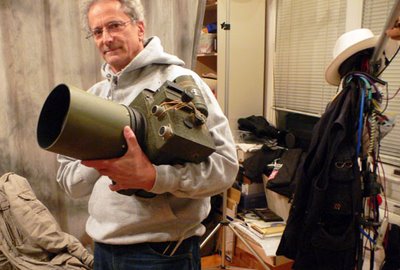 "Don't drop this on your foot!"

The 'stuff' is all there (interfaces, cables etc etc) , and of course I was being given a little message: The 3 lock screws holding the lens on won't move ( I need a machinist, I think, to liberate lens from body) .. but the joy of trying to hold the damn thing really made me feel like my hands were touching a part of history.

I am a history buff I suppose. I have visited Normandy a number of times over the last 35 years, still enthralled with D-Day, the men who made it happen, and the living history which still surrounds those beaches. Who else do you know who has on his itunes Gen. Eisenhower's broadcast to the people of Western Europe the day of the landings? So you get the idea. But more than anything, to hold a piece of amazing industrial engineering like that which the K-24 package represents, is like holding a history in your hands. We photographers like to think that we are collecting and writing the First Draft of History for the rest of the world. But now and then, the latter drafts of history have their own amazing ways of speaking. In holding that K-24 I think I was touching a draft that I'd previously been searching for a little too hard to actually see it. We're just sayin... David
Posted by Iris&David at 3:22 PM

That guy have anymore of these K-24s?

Got to keep up with the Burnetts, and stay in shape to lift my 8x10.

Wow!Seems I need to start looking at ebay!That's such a fantastic find, and there's not a damned thing wrong with being a history buff..especially in right hands. Maybe that's why I cannot part with these old Nikons, as we've been to many places. Only photographers understand this stuff, right? I can hardly wait to see images produced from this.

if you ebay around for k-24 camera, you should see some popping up.. the prices are slightly rising as he ends the run of his 200 cameras.. but there still are some. nver too late.

David:
Now all you need is to find some 5.5" roll film that has been frozen since 1950. Maybe a plane crashed on a glacier somewhere and you can recover the film. I think you should start shooting the thing, forget taking the lens off. You can get custom cut film you know, so maybe you can adapt the back to single sheets.
-Ed Riddell

Whether we shoot with it or not.. and its an iffy proposition I suppose... there is always the joy of just walking into a cocktail party with it slung over your shoulder (s). It's even cooler than the Contax G2 which in the early 2000s was THE 'camera to carry while entering a cocktail party..' I Suppose you could put a graflok on the back.. im not sure about the whole shutter, thing, but If i can put my hands on a P-38 or P-51, that could be the next project. Great to hear from you Ed.... DB

Anonymous said...
This comment has been removed by a blog administrator.
11:05 PM

Anonymous said...
This comment has been removed by a blog administrator.
11:08 PM

Youknow..maybe THIS is the way to get into the front row @Penn Ave!

I just came across your article when I was considering getting one. The last one I was looking at a few months back went for almost 3x the now asking price of $250.00, and not nearly in this condition. Now if I could just afford a B-25 to carry it around.

George said:
I also own one of these nice cameras and as I also own two K-20s (25 ft roll of 4x5) and a KE-28B (70mm) film was a consideration. Kodak still makes film for these cameras in 100 and 300 foot rolls either 6 or 12 rolls to a case. You would have to reload the film on spindles. here is the link
http://www.kodak.com/eknec/PageQuerier.jhtml?pq-path=2608/2609/4118/6214&pq-locale=en_US
all the technical specs are available too for these films. but I need to find the 3 or 4 thousand a case of film would cost or hire myself out as an aerial photographer as the f-16 doesnt quite give me the depth of field needed( about 67 ft using data from the lens data book for the wide field ektar 190mm f 6.3 lens) i hope this helps a littlebit

I just bought one of these "unopened" on ebay. I can't wait to get it! I found my dad's old Graflex and this seems like the perfect lens for Polaroid type 55 portrait and landscape work. I am really looking forward to this project.

I just acquired an old USAAF manual (sorry not for sale) for one of these K-24's after I got one off of ebay. I learned a lot about the actual camera itself from it.

Shutter Speeds, depending on curtain installed: 1/900 sec., 1/450 sec., or 1/150. Three exposures per second while motor driven without intervalometer. Without motor, same speeds, but obviously not 3 per second.

That round plastic disc is a rear lens cover and the metal plate is the magazine cover.

Great article and great project. I can't wait to modify a Graflex. I ordered a lens off of ebay and mine barely has the "browning" of the glass at all. Just a little yellow, that's it. Although it has a little dust inside the lens, but oh well. I recently bought a yellow filter advertised on eBay as fitting the Aero but it doesn't... way too big. A little research reveals there were other sized Aeros... we're talking 12 inch and 24 inch! I think mine is for the 12.

You can learn more about the "Burnett
Combo" @
http://www.johndesq.com/graflex

I also purchased a K-24 for a research project on photo-recon Mustangs as used in China during WWII. I've located an F-6D airplane but I'm looking for and manuals for the camera and/or wiring diagrams for the P-51. Any help? rbourlie@tampabay.rr.com

Hi All -
I have photos from my Dad that may have been shot with the K-24 camera. Can anyone help em with WWII photo preservation? Thanks!

Hello there!
I was just wondering how much are these cameras worth? I have two that say usa army aircraft k-25's in a metal case, and they each come with a set of two hadbooks.
Help!

WOWwwww..... i think this camera was too solid & power full during WWII. i have photos of my Dad that may have been shot with the K-24 camera i think. i was searching for motormint specials but luckily i found this blog.

BOB SAYS:
I HAVE A K-24 AND I WOULD CONSIDER SELLING IT FOR A RESPECTABLE PRICE.
E-MAIL BASS2277@AOL.COM

today i have just seen a k24 without all the cables etc. just body and lens and shade. is it functional? at david: so you must be david burnett-the former white house photographer in the 70/80ies. on dec 13,you were sitting already on the skyscraper in warsaw shooting the armored vehicles just the day when the generals started the "kriegsrecht".
http://de.wikipedia.org/wiki/Polnischer_Ausnahmezustand_1981%E2%80%931983
first photographic visit of poland was 1969.
accidentally i was in moscov in march 81-when the russian were standing by the boundary of poland. me searching for horizon-help with no success.later in 1992 this panoramicshot was made: www.auschwitzpanorama.tk
refused by very large publications worldwide: stern, NYT magazine, LA TIMES, figaro magazine and two swiss publications.
michael przewrocki
www.3dreal.tk
www.europanorama.tk
www.3dpanimages.tk
3dstereopanoramas/aeropanorama/marspanorames(when my website is working again)

david burnett-maybe i confused you with david kennerly. ok, it seem david b. is also succesful with a holga....
http://www.3dstereo.com/Merchant2/merchant.mvc?Store_Code=3D&Screen=holga_stereo

Volunteering for a Military Museum we just got a donation of the very same camera.. super excited. Ours is unused and still in the box our serial number is 163320 we cant wait to open it. Anyway Besides checking the net can you help us with any information on what year the one we have in our hands? and on how I can find out more about this awesome camera? Do you have any idea on what this is worth we need this for our data base.

What are these worth in good condition?