Every Christmas, for about the last fifty years, I have spent Christmas Eve at Pam’s house. I’m not sure how it started but I guess her parents felt sorry for me because I was a Jewish anomaly in a virtual sea of Italians, Poles, Irish, and of course a variety of Protestant/Episcopalian types. What does virtual mean? I could say literal but I’m not sure how that works either. Anyway, Boonton (a town often used as a backdrop for the “Sopranos”) was surrounded by restricted communities. For those of you who don’t remember restricted, it meant no Jews, Italians, Blacks, or Catholics. There were actually signs on the entrances to these places that said “A Christian Community”. We, of course were oblivious to any discrimination because we would never have considered buying a house where there were no Jews – forget allowed. My family would never admit that they were forbidden to occupy any space.

It must have appeared to Pam’s parents that I was drowning in my loss of Santa or, at least, the action of gift giving. They knew we celebrated Hannukah, but when there are a total of 25 Jewish kids in the whole school system, Hannukah was not something that anyone but the 25 Jewish kids understood—and even some of us were not that committed to celebrating what were considered exotic holidays. I mean, when we were kids there was no such thing as separation of church and state. There was no question about singing Christmas carols during class time—it was just something we always did. And rather than make us feel uncomfortable about participating, the teacher would insist that the Jewish kids go and stand in the back of the room. As you can imagine that took all the discomfort away. There were three Jewish kids in my class. There we were me, my cousin Stevie, and Andy Hurwitz trying not to look different or separate.

Back to Pam’s for holiday celebration. But before we get to 88 Harrison Street, it’s important to know that Claire, Pam’s mom, was the original human rights advocate. She was adamant about respect for individual differences and resigned from a “Christian” sorority which forbid admission to Jews. So her invitation was not because she felt sorry for me it was because she wanted to share the joy of her holiday. So it became a tradition that we would decorate the Christmas tree and on Christmas eve we would exchange a gift. I would spend the night Christmas eve and leave before any of the Christmas day activities—that was at my mother’s rather than Pam’s mother’s insistence.

About 12 years ago things changed a bit and my mother started to celebrate with us. In addition, we were all invited to have Christmas brunch at the Wilds. Ronnie and Joyce have also been friends since high school. The ‘all’ included my mom, Pam’s mom and Joyce’s mom—none of whom had ever said more than two words to one another. It was wonderful to see them chatting like old friends. We instituted a few other traditions—I presented them ‘all’ with beautifully sculpted White House Christmas ornaments and I purchased a silly hat for Ronnie—because he is one of the funniest people ever born and I knew he would wear it. 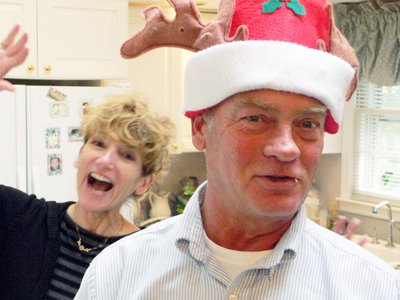 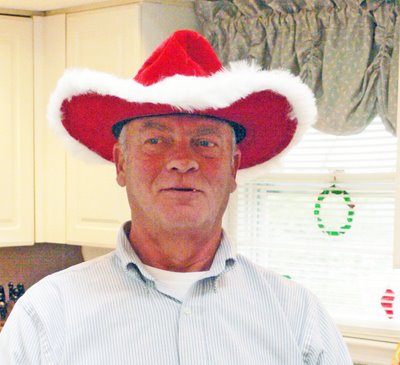 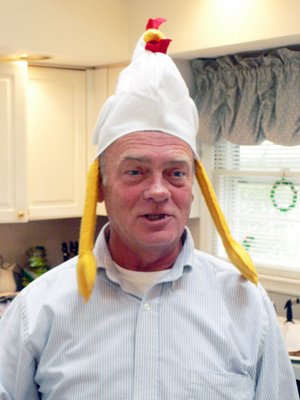 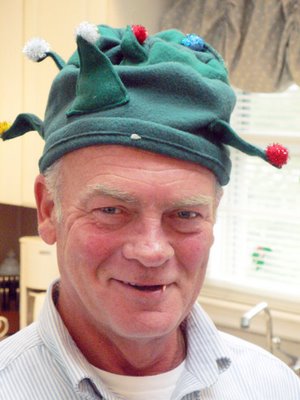 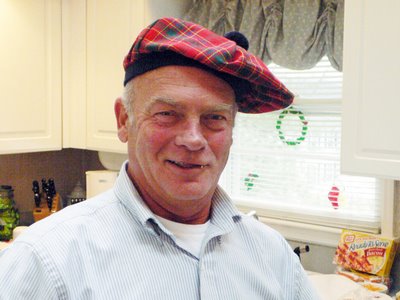 It’s strange because, as I recounted about our Hannukah party, this year’s events were very quiet. Mom had a kind of ‘pause’ before we left for Pam’s. The pause took the form of a narcoleptic nodding off. She was actually standing and seemed to go to sleep. Needless to say, we thought it was not a good idea to take her out on the town. Then the same thing happened before we left for the Wild’s this morning. Pam and her family and Joyce’s mom were not there. Pam had other company and Agnes can no longer walk so it’s impossible for her to leave the nursing facility. Things have certainly changed in the last year. Too many tears outweighing the too few laughs.

Obviously, it’s time for laughs so let’s go back to last weekend when we returned to Va. from our last New York adventure. Soozie, David and I stopped at our favorite flea market—cow town. Soozie had never had a Cow Town experience so first we needed to hit our flea market hot spots, which included the fresh roasted peanut guy and the cheese steak stand. It was only about 9am and we were a bit nervous about things being open—but not to fear— everything was open and in fact, the Danny’s Cheese steak was also making omelets on the same bread as the steaks—to die for. When we started our walk in the outdoor section of the market it was pretty brisk and my ears were freezing, so our second stop was at the Russian fur hat lady where I purchased a $10 fur head wrap. We then sauntered about and found a guy who was selling not bad wigs for very good prices. Jordan had misplaced her curly blonde Sally Brown wig (from You’re a Good Man Charlie Brown) and there was one right in front. We bought that one for $10 and he said if we found another it would only be $8—so we took that one as well. Then Soozie had to have the most ridiculous hat at the market – she called it a barn hat. I guess that’s because you would only wear it in a barn, (or a World War II Russian fighter plane). It cost $10. We milled about until David found a terrific 1940’s fedora. It was a must have item...for $10. 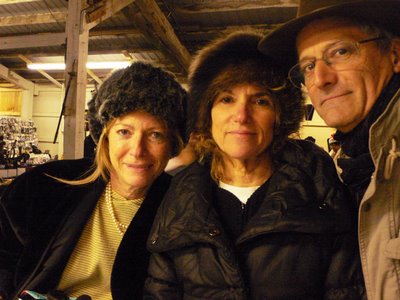 We probably spent $200 on many things we didn’t need but we had a great time and no shortage of laughs. I never found a hat for Ronnie at Cow Town. But I finally found one in an Oriental Trading catalogue—which is a must if you every need cheap chatchkas for Halloween or a religious party. But that’s another blob. So Christmas was quiet and it’s over and unfortunately, no matter how good things can be, nothing stays the same, except maybe always being able to find a $10 something at Cow Town. We’re just sayin...Iris
Posted by Iris&David at 10:35 PM

My father-in-law got me a hat for Christmas. I'm wearing now as I type (hey we keep the heat low in the house - what can I say). It's fleece, which is great, but it is also camouflaged on one side and bright hunter's orange on the other. If I wear it orange outside and flip up the ear flaps, its is both. I've never hunted in my life. Never will.

But that said, I am totally, insanely jealous of Ronnie's hat collection. I'd wear any one of them, especially on the ski sloops. I love silly hats while skiing.

So Ronnie, if I ever meet you, please, please show me your hat collection. They are just terrific. I couldn't imagine a better Christmas gift.

Hat's they keep us lookin' sharp, especially when huntin' wabbits.

Kida reminds me of the Bugs Bunny cartoon in which a truck full of hats makes a sharp turn, and a bunch of hats fall off..That's the one that has each character change personas dependent on the type hat landed on them at different times..What type persona does a 1940's fedodra take on?

Walter B
Love your comments and your gift. Many thanks and wishes for happy holidays. David's persona never really changes regardless of attire--however he is thinking this 1940's persona is one he's considering taking to the White House and other equally colorful shoots.

Walt,You need a subscription to Oriental Trading. It sounds like your kind of stuff!

Walt.. im SO good to you! I ALMOST signed you up for an Oriental Trading (www.orientaltrading.com) catalogue, but they wanted an email address, and I didnt want to give them yours... but you should check it out: chatchkas and dreck the likes of which you cannot imagine:

vinyl foamfilld flame footbals, (4.5" version) only ten bucks a dozen... everything is in dozens.. you gotta love those folks

You two are quite welcome.Thanks for the tip on Oriental Trading.I appreciate the thought of not giving my address without knowing. Actually, it would've been okay..I have 'the' persona for David as he sports the fedora and packs the K24.."Indiana Burnett" or "Indiana Dave". Probably the latter rigs better..And David, ya really know how to surprize someone..thanks!

I just now checked out the OT site, signed up for the catalogue and...oh,my God,I thought I was trouble enough with the Johnson Smith catalogue..Thanks.

Hey Isie.
That Scottish tam Ron is wearing was a gift from me the year mom and I went to Nova Scotia. I often wondered if he ever had occasion to wear it. I thought to the golf course, maybe.

As for our traditional Christmas celebration, I remember, no one feeling sorry for anyone because they couldn't sing carols or live in that closed community. In fact, I remember feeling a bit envious because you three Jewish kids got to stand up and receive a lot of attention, while the rest of us had to stay in our seats. Furthermore, I was outright jealous of the fact that you got to stay home during Christmas AND Channukka, not to mention this holiday and that one and the other one while I had to go to school (and you went to NYC and saw shows). Here was proof that you were the Chosen Ones.
Now, I have always been sure the all-faith Christmas celebration at Mom's started with your realization that at our house pork chops were there for the gnawing. While it is true that Mother Claire believes everyone should be treated faily, first and foremost she believes in the rights of all children to eat crispy pork. The meeting of your pork deprivation and Mom's crusade to give pork to all led to the Italian sausage, then the meatballs, then the logical progression to the lasagna. Then, of course, the domino effect came into play leading quite inevitably to the Universal-Interfaith Christmas Eve tree decorating.

I had no social concience about those who had grown up without bacon and Taylor Ham, but I was happy to have a kid in my only-child world and there was plenty for you and me.
And now there is plenty for the rest of them, too...the kids, their sweeties, their pets...

And there you have it, my belief-
because of bacon, the Christmas tree became a Channukka bush.

They even have the Train Engineer's hat that I had when I was 3 years old. I never went anywhere without wearing that hat.

So cool. Now I can spend hours here instead of eBay. Grin.

This web site is the best Christmas present since my Lionel train set. Thank you Iris and David!