And a Very Happy Hannukah

Tonight was the eighth night of Hannukah. We do a Hannukah/Karaoke party every year for Jordan and her friends—and sometimes the parents of her friends who have become or were our friends before they got to be her friends. What’s the difference. I make latkes and if I’m very lucky, Ralph Smith the father of one of her friends who was our friend before China Bay—her friend, became her friend. Are you following? Well let me try to make it simple. Amy Milman, who is married to the latke-maker was my friend from the Clinton administration. Then we both decided to send our girls, Jordan and China to business camp. Jordan had been going to a theater camp which, for the sixth year, she was going to do after completing business camp. China, had decided to go to theater camp as well. So on completion of their final projects involving starting some kind of business, they were both off to the world of musical theater. It was clearly a change, but Amy and I felt they needed to find a way to express themselves in whatever profession they so chose. Neither are business majors, but at least they learned how to write a check—I think.

Anyway, we had the Hannukah party tonight on the actual eighth day of the holiday. Sometimes we have it well after the holiday season ends—it really depends on when all Jordan’s friends are home from college.

There are a few tasks we traditionally complete. I make my usual “bigger than Brooklyn” challah. 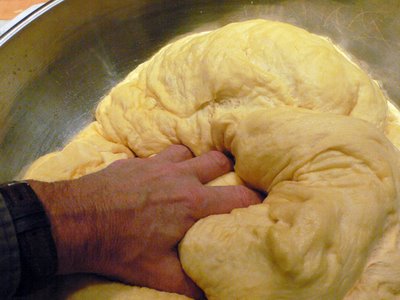 Punching down the Challah dough 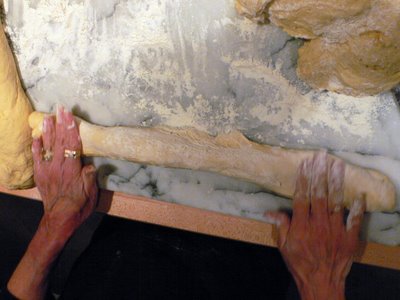 Iris rolls the challah into shape


And then dozens of latkes with Ralph’s help. The kids eat the latkes without any help. 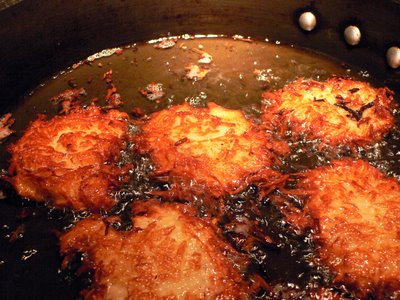 Latkes: from the "brown food group"

Then the activities begin. We have some kind of dinner, usually all brown or beige food groups like chicken and kugel and some other meat cooked for hours.

Sometimes we introduce a vegetable but they are usually consumed with the appetizer portion of the program. When we finish the latkes and the dinner it’s time to dance the hora. We always dance to the same music. 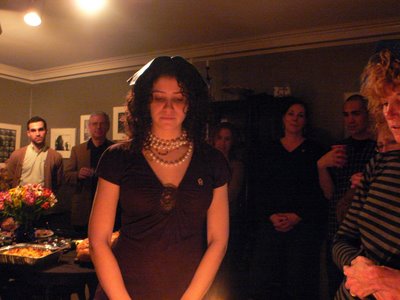 A tape that we bought Jordan when she was about three. It has wonderful songs about Hannukah night and lighting the menorah and it has a few upbeat pieces that are perfect for dancing. And so we do. Sometimes to the same music two or three times.

But tonight it was a quiet Hannukah celebration. Amy’s beloved mother died yesterday and although she came to take her mind off the melancholy for a moment, her thoughts were elsewhere. Mom couldn’t be buried on the Sabbath so they will have a graveside funeral on Long Island on Sunday. I used to think that Long Island was only cemeteries. It came as a big surprise to me that there were living people who resided in this place. My whole family, both sides, are buried somewhere on Long Island, as are a variety of in- and out-laws. The most amazing coincidence is that my father’s family rests right next to my first husband, Allan Jacobson’s family. And they didn’t come from the same shetel nor did they know one another. It just happened that they picked geographically similar plots.

It’s a funny old Jewish cemetery where the streets are exceedingly narrow and the people are buried in close proximity to one another. The first time we visited was when my grandfather died. But I have only nightmares about the horror of that death. When my grandmother died Seth was about two. He didn’t go to the funeral but a few years later we went to pay our respects to his grandparents and mine. While we were saying the prayer at the grave Seth was scouting the perimeter and at one point he came to get me because he had to show me something. “Mom, you are not going to believe who is buried here. You have got to see this!” We walked not very far and he was jumping up and down with excitement. “Is that unbelievable?” he shouted. I looked over and sure enough there was Golda Lax’s grave. “The three bears probably weren’t Jewish” He lamented. “But Goldie is right here with Grandma and Grandpa.”

People seemed so tired tonight. Almost exhausted by the events of the past year. When Christmas is on a weekend people don’t have time to shop or pack or have any time to relax. Back to the party. We had my favorite dessert, a chocolate cake from Costco, opened presents and then most people left without even turning on the Karaoke machine.

When Jordan was in elementary and high school she had six friends. One, Melanie, was her friend from nursery school, and the others five she met in sixth grade. Mellie moved to Iowa freshman year in high school but they remain very close. 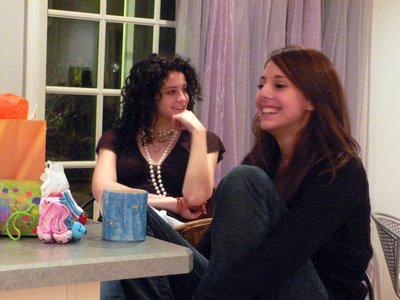 The others spent grades 6-12 as a big part of one another’s life. On one memorable occasion, when we had a hurricane in the winter, and school was closed for a few days, the girls came to our house and stayed for five days. They watched “Angels in America” and “The L Word” and mostly never got out of pajama’s. After three days their parents started to call wondering if they would ever see their progeny again. I guessed there would be a time when they left but it was so much fun to have them around, I didn’t care if they never went home. We clearly did not have the same teenage issues as many parents. 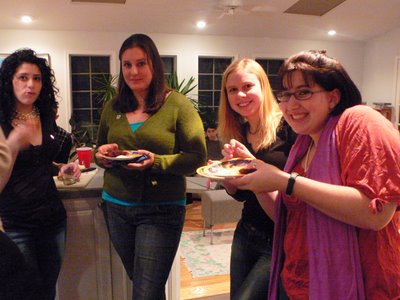 "The Girls": Jordan, Lina, Caroline, Emily
The “girls” stayed after the party ended. We played dress-up and they insisted I try on some whacky clothes that they could laugh about. And then they all went home and it got even quieter than it had been.

I thought about the wonder of these children and their joy about life. And I thought about Amy’s terrible loss. And I thought about my mom and how frightened we were about her illness and the possibility of loss. Life is certainly not uncomplicated but I know we should celebrate whenever possible and we should always surround ourselves with the people and things that make us happy. And we should all have many wonderful Hannukah’s and Christmas and very Happy New Years. We’re just sayin... Iris
Posted by Iris&David at 11:14 AM

And Happy Festivus to all.

Let the airing of grievances begin around the Festivus Pole.

It is always so great to see such celebrations of life this time of year, in the face of all too many dwelling on negativity. Although I am Christian, I wish you a Happy Hannukah,as well. I hope that makes sense;people are people..

Happy Holidays! Could you ask David to contact Lane Hudson at the email address 'lane(at)lanehudson(dot)com'?

Dearest Iris, I acannot believe that I have been reading you blog for the past hour, it is wonderful , very entertaining and quite delightful. I hope u read this and you do not have my correct email address. dsergi@hvc.rr.com
much love , cousin Debbie