How annoying is it to call the phone company, some essential utility, or the United Staes Government and get a computerized friend on the phone. The “Hi, I can help you do whatever it is you need to do and all you have to do is wait one hour and provide us with enough information that we could be your parent or child.” Today we attempted to switch my mom’s social security income from snail mail to Direct Deposit. I waited for about fifteen minutes, talked to my computerized friend and was disconnected before any changes could occur. 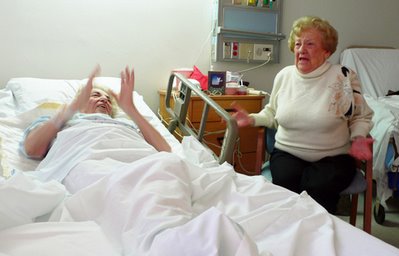 David took over. He loves to deal with idiots because he can play with them, but even for David the social security computer friend was too much. So he pressed operator and screamed agent about 100 times and was finally connected with a human being. He gave them all the requested information and then they asked to speak to the principal – in politics this would be the President. Anyway, he put me on the phone to pretend to be my mother. I decided to frustrate them as they had done to us. I yelled into the phone pretending not to hear what she said. I indicated I was hard of hearing and then I did an imitation of Jordan doing an imitation of my mother—heavy NY accent and smokers voice—neither of which my mother actually has. The best part was when the agent begged to speak to the young man who had made the call—we considered that a victory over the technology.

The issues we never thought (as young people) we would have to deal with as adults, just seem to go on and on. Last night we escaped to our apartment in the city but by 5am we were both wide awake thinking about all the issues and were so overwhelmed we could hardly get out of bed. David has been there all the way as have my cousins Ro and Honey and, of course, Kerry, Soozie, Marian, and Karen—all of whom have gone through this or have been there and done it.

It’s not as simple as finding help. There are all kinds of financial and emotional issues. For example, I am a person who has never written down the amount of a check. Ever. I know about how much I have and I refuse to quibble about pennies. Don’t you love the word quibble? It’s almost onomatopoetic but only if you shout it. Never mind, I am clueless about numbers. I don’t mean to be, but I did have to take Algebra One and Geometry One twice. And I only passed because the math teacher was my next door neighbor. He later became Vice Principal and despite the regulations about not leaving school grounds, he allowed us (me, Pam and Joyce) to travel two blocks to my house to have lunch and watch soap operas. OK, he didn’t know we watched TV, but he did know whatever we were doing was not academic. In addition, when we left the school grounds it was in Ronnie Wild’s 1963 Edsel (he is the only person alive who had two of them.) That car stayed up all night thinking about how it was going to fall apart the next day.

We thought “on-line banking” would help relieve the burden for me. But when David explained the complexities I totally freaked out and wondered why anyone would select this option rather than write a check. I haven’t decided what my choice will be. But I do know that any additional bookkeeping for me does not have attractive consequences. The good news is that we continue to find wine to take off the edge. Moscato di’Asti is our latest love. Our friend the Italian Wine guy suggests Ceretto but I’m such an Italian wine slut I’ll drink anything that doesn’t say Arrivederci before I uncork the bottle.

We’re doing our best to do our best. And it’s really all anyone can do. So we pray mom gets better, which will be easier without the burdens of everyday tasks, and we hope for a miracle with regard to my skills to add and subtract. Talk about stress. We’re just sayin...Iris
Posted by Iris&David at 10:34 PM

man, you guys have a full plate...so sorry for you...been there....you dont want to even think about life after your mate goes....that's a whole 'nother story.. i feel for you guys...AC

I fully understand your plight..I'm there with such a situation myself..You are so blessed with a great family,especially a mate that hangs in there with you through thick and thin..what a true marriage is all about..Not too much of THAT happening anymore..Debbie and I thought we were (and probably are)part of a disappearing breed. I'll be praying for your mother..Can't hurt!