We arrived home at about 11:00 pm. CL, my mother’s latest au pair, was supposed to be spending the weekend at her sisters. I noticed her bedroom door was closed and asked Soozie if she had done it. “No” she said “but it is weird”. With that she opened the door turned on the light and indeed, found CL in bed.

“Who is the blond?” She asked. “It’s CL, but I’m surprised she’s here because she was supposed to be away.” That’s what I said, but here’s what I thought: we are certainly going to hear about another CL drama.

With CL the drama is endless and the performance accompanying the drama, always matches it in time and tedium. Mom has been in some institution, first the hospital and now rehab since we hired CL. This means that I have been paying her but she has really not had any responsibility. In fact, when she forgot to renew her driver’s license (she insisted this didn’t mean she was driving illegally) and was driving her own car (I forbid her to drive my mother’s car), without a license, I was not too concerned because she had a little time before my mother would need her for transportation. But this week she told mom that getting her license was not as easy as she thought it would be. She thought it was merely a matter of going to motor vehicles with some identification and they would issue the valued piece of paper necessary for her to have her job—which requires she drive mom to doctors appointments and, of course beauty appointments for hair and nails.

Nothing is easy since the Patriot Act was passed. Did I mention that CL is not a citizen—she failed the test. She has lived here for 30 years and has a green card and had a job with a law firm, but she sold her house, never could find her social security card, and clearly didn’t have enough ID to make the motor vehicle people happy. Did I also mention that this is the same woman who worked for my mother a few months ago and when my mother told her to turn left instead of right, on their return from a shopping expedition to the Dollar Store, drove mom home walked into the house, packed her bags and left without a word. 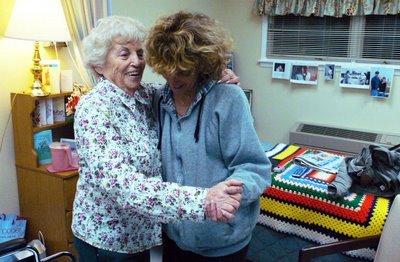 Dancing on the 3rd night of Hannukah

Why did we rehire her you ask? Because we had no one, and she begged to be forgiven and promised nothing like this would ever happen again. And my mother liked her, despite the signs of a personality disorder and not being the brightest star in the sky.

Anyway, after Soozie turned the lights off and we had two or three words about how surprised we were to find CL in the house, I went into the living room and Soozie went into the bathroom to brush her teeth. When she came out she saw that the light in CL’s room was on and, in fact CL was packing numerous bags and destroying an endless number of cardboard shoe boxes—but let’s not go there.

“I think she’s leaving” Soozie reported. “Why” I said. “How should I know but you might want to go talk to her.” It was now close to midnight.

I knocked on her door. “Where are you going in the middle of the night?” I thought that was a reasonable question. “Well you don’t want me here and I’ll just go to Helen’s” Helen is my mothers neighbor who has lung cancer and is not in great shape. “Why would you do that? I didn’t tell you to leave. I am angry about the loss of your license since you didn’t renew it and now we have to find someone else to do what we hired you to do, but I never asked you to leave—especially in the middle of the night if it requires waking Helen.” And here’s what she said. “I didn’t choose to lose my license. It wasn’t my fault.”
And here’s what I said. “Of course it was your fault.” That’s not what she wanted to hear.

Well, CL continued to pack and rant and at one point she tried to give me a Christmas gift. But I would have none of it. I was now very angry about the fact that we would once again have to start a search for health care help, my mother would be upset, and poor Helen would have to deal with this nut case in the middle of the night. 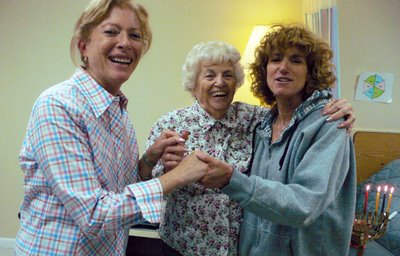 I awakened very early the next day and drove up to mom’s to report what had happened. Unexpectedly, she said not to worry but would I mind taking her a bag of laundry she had discovered, home. That was part of CL’s responsibility but she hadn’t done it. So I took the laundry and was about to put it in the washing machine when I saw there was no detergent. CL was suppose to take care of shopping for stuff we needed in the house. I GAVE HER $100 TO DO THIS. Then I noticed the sink was filthy, the carpets full of crap AND we were out of tuna fish and Hellmann’s mayonnaise. In all of the 54 years my mother has lived in the Reservoir Drive house, there has never been a time when the cupboard was without at least one can of albacore tuna and the fridge always had a jar of mayonnaise. (Never chunk light and certainly not Miracle Whip).

I called my brother. “There is no tuna and CL left in the middle of the night.” I screamed.
“Do you think she stole the tuna?” he asked.
“NO! I think she ate it. She ate everything that wasn’t marked poison or nailed down. But nooooooo tuna!” It was inexcusable.
I called mom. “There is no tuna in your house.”
|”That can’t be. Do you think CL took it when she left?”
“NO! I think she ate it and didn’t replace it.”
“Don’t worry. Listen, Just go buy some tuna, get the Hannukah candles, and come light the Menorah.”
“OK,” I agreed, “we’ll be there after we pick David up at the airport.”

I know many of you have been following this continuing mother care saga and I don’t want anyone to worry. I had put an ad in the paper as a ‘just in case’ last week. Lots of people are looking for work. We found a wonderful woman to replace CL and mom is coming home on Thursday. We picked David up, lit Hannukah candles and we all danced the Hora. Oh and 620 Reservoir Drive is no longer a tuna free zone. We’re just sayin...Iris
Posted by Iris&David at 12:31 AM

I am in great hopes you can find the right, trustworthy person to assist your mother. I know, from my experiences, it's a daunting task.The abusers of the elderly and infirmed fail to realise they, too, may grow old and dependent.Now,wouldn't THAT be justice?I wish your mother well. Hang in there.

Exactly how has life become more difficult after passage of the Patriot Act?