New York City is brimming with tourists. You can hardly walk down or up 5th Avenue. From where do they all come? It is only December 15th, hardly Christmas vacation. Doesn’t anyone go to work anymore?

And people are really nuts. Where the nutsiness normally starts about five days before Christmas, it has already started. It seems people are not filled with the holiday spirit. They would just as soon push you off a curb as walk around you. They push and shove in the theater line, and they cross streets without looking and then get angry when a cab comes close to running them over. Do not think I am in anyway defending cab drivers, but street crossing has become a terrific way to be entertained.

Maybe it’s the times. Maybe people are feeling guilty about not having to pay any price for the suffering of our troops, or maybe people are simply nervous about the future. I was OK about the future until last night when we returned from not suffering in the least at our friend Louise’s fabulous yearly Christmas party. It’s an event we look forward to all year. There are always new (and old) interesting people in attendence. Writers, actors, musicians, producers, performers and just plain fabulous folks. On the top of my list of favorite attendees is Bel Kaufman. Bel wrote my favorite book, called “Up the Down Staircase.” Although it is a novel, it was my handbook and survival guide when I taught in a public high school in 1970. It’s smart, funny and so very creative. As is she. At 95 years young, she still dances (ballroom) three times a week, is is happily married to a younger man (he’s 91) and she has the most marvelous sense of life and herself. Bel is the granddaughter of the Russian writer, Sholom Aleichem, so there is never a shortage of stories. Louise was kind enough to extend an invitation to our cousin Joe, a most talented photographer and to Soozie, who is visiting with me this week. It was a great evening until I got home. 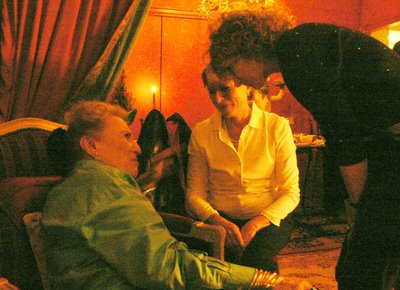 Bel, with Soozie and Iris

Unfortunately, the news was on and worse than the news was the information. The President has decided that he is not leaving Iraq until the “mission is complete.” I would sure like to know how you complete a mission when you have no idea what it is. Do we expect a victory—well he said we have had many victories – we killed over 5000 people. I wonder if they were all terrorists. It seems unlikely. Is that how we are measuring victory now? It’s hard to say since we no longer have to determine what constitutes victory or mission. I thought the President announced “mission accomplished” almost four years ago. OK, I say we go with that. We simply declare that the mission has been accomplished (since no one knows what it is, it won’t matter), and we bring the troops home.

Today there was more bad news. It looks like the President thinks we need more troops to accomplish the undefined mission. So not only is he ignoring the committee recommendations, he’s just going to do whatever he wants to do instead. Clearly, he has done such a marvelous job up to now, the country will continue to whole-heartedly support his folly -- not. He’s at 34% approval and dropping. And what can we do about any of this. If the disaffected parent of a soldier who was killed or still serving, were to knock him off, Dick Cheney would step in. Talk about your worst nightmare. And then there’s no telling who’ll get shot.

This guy has two more years and can do the kind of damage internationally from which this country may never recover. As you can see, between the crazy people on the street and the crazier person in the White House, those of us in New York, in the US, and the rest of the world are simply not going to feel safe well beyond the holiday season. I would suggest going to work, taking a few breaks, not to suffer at a holiday party, and then rushing home and never turning on the TV. Maybe in the New Year, someone will find Mission Acceptable enough to accomplish and we can all feel better about the state of our nation. We’re just sayin... Iris
Posted by Iris&David at 7:56 PM

Our foreign policy in Iraq is shaped by the Saudis. Bush, his family and Cheney take their orders from those who put cash in their pockets.

Don't think this President cares what the American people may think. He never has when you review his track recond.

Remember, he's the "decider." Until the Saudis decide differently.

We the American people spin like Dradels, we always give one to the pot, and Bush always takes. Happy holidays!