Susan Ford always told the funniest stories about her father becoming the Vice President. She talked about how it happened so quickly and unexpectedly that they were not really prepared for what they were, as a family, about to encounter. She did, however think that she was going to be best friends with Julie and Tricia Nixon. It just seemed like it was bound to happen. After all, they were a little older but about her age, and they were Republicans, and their dads would be working together, and maybe (although unlikely) their moms would find something in common. So the fact that they would have nothing to do with her came as big a surprise as the fact that her father was going to be the Vice President of the United States.

I didn’t meet Susan until after the Fords left office. But I did know her first husband Chuck Vance. He was the honcho on the Udall detail in the 1976 Presidential campaign. I was working as personal staff for the Udalls so Chuck and I spent an enormous amount of time together. Chuck had been protective detail for President Ford and there was some talk about his relationship with the Ford daughter. It was Washington gossip and we were excellent Washington gossipers, but the campaign trail was not a place for personal conversation about personal issues, so we didn’t ever mention relationships – other than those on the road. Chuck and Susan were married in 1979. 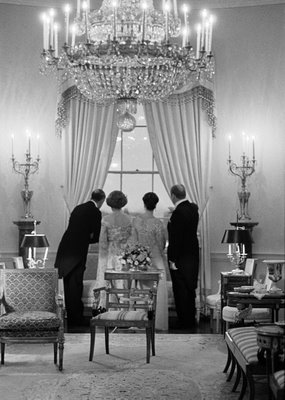 Gerry and Betty welcome the Giscard d'Estaing's to the Private Quarters, 1976 ©D Burnett


When Morris K. Udall lost his bid for the Presidency, I was devastated. I cried from the end of the convention until almost two months later when I went to work for Rosalyn Carter. I simply couldn’t work for Jimmy because I was so closely identified with the Udalls that I couldn’t deal with the national press and a new candidate. The Carter’s were not as colorful as the Udalls. It was quite a change. The most difficult being that I lost touch with so many friends I had made on the campaign trail. Chuck and his partner Harley Limpke were among the missing for me. Until about 1979. When David and I were invited to go to Jamaica with a group of friends—some of whom we knew and some of whom we were about to know. The group included Pat Oliphant and his then wife Marianne Kuhn, David Kennerly and his then wife Mel Harris, Chuck Vance and his then wife Susan Ford, and David Burnett and his still wife Iris Jacobson. Get the picture, we are the only couple still together. It was wonderful to see Chuck again and t was terrific to meet Susan. Basically, despite the personality differences, the week was fabulous fun.

Over the years I have lost touch with Marianne, we see Pat infrequently, Kennerly has been married twice more, Chuck is remarried and we have recently reconnected but I have remained in touch with Mel and Susan, two women I admire, respect and really like.

Anyway, as a Democrat who worked for Jimmy Carter, I was happy when he won. But I was never happy that Gerry Ford lost. It’s not something I can explain but the country was so tired of war and division that the fact that he ended one and brought us all together was quite a feat. And I don’t think he lost because he pardoned Nixon. I think he lost because everyone was tired of what they considered the status quo. We all needed a change and unfortunately change meant Ford had to go.

I was happy that the Carter win meant that we all might get jobs. For me it meant a new start to my life. Little did I know that it would take months before the new White House would make any decisions and I would be living in my Fiat 128 stationwagon for weeks because I had no money and was recently separated from my husband.

This morning we were still in bed when we heard about Gerry Ford’s death. We were saddened by news and sent a note to Susan and her family. For this country and the rest of the world Gerald Ford was a President who healed the nation, who sometimes experienced silly falls, who respected the opinions of women, first and foremost his wife and daughter, and who, as David says, was just a great guy. Generous, loyal and good humored. I didn’t know President Ford personally, but David did, and over the years he has been consistent in his admiration for the man. The stories he told about being with the family were always (you should excuse the expression) heartwarming. In a time when people were, much like today, self absorbed, mean spirited, and unattractively partisan he was one of the good guys. It’s only too bad there aren’t more like him in public service. Really too bad. We’re just sayin...Iris
Posted by Iris&David at 11:25 PM