Barak Osama, or is it Obama ben Laden or is it Barak Atah Adonosama? I get so confused. Who is it that is running for President or terrorist or both? Here’s what I know. The Ben means son of. And before there was the son of Laden I only knew about Schmoil Ben Pupik or Rivka Bat Basha. Those are the Jewish names people are given when they are born or have a B’nai Mitzvah. I don’t want to go into great religious detail, but that‘s what I know.

1984 was probably the last time that a candidate simply announced. After that most created an ‘announcement to announce’. The ‘announcement to announce’ is a concept more easily understood when you remember that everything which is done in the modern political campaign is somehow related to money and/or the media. Today, because campaign costs have become prohibitive, almost everything which happens is done with the idea of getting "more free media". 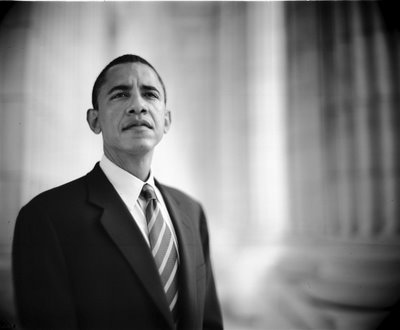 Barak Obama: Is he readying his 'Announcement to Announce?'

Governor Dukakis (the guy with the helmet in the tank) had lots of reasons for announcing he was going to announce. First reason: he did it because he told everyone he would make a decision by the middle of February, it got to be the middle of February and he had made a commitment to make a decision but he was not yet prepared to make the Official announcement -- so he announced that he would be a candidate but the Official announcement would come in the middle of May. Second reason: he felt he owed it to elected officials, staff, and the public to let them know what his intentions were. Third reason: (not unimportant in the political scheme of things) he wanted to send signals to "all the interested parties and usual suspects." In other words he wanted to let the right political people know he was "thumbs up" and not to hook up with any other candidate.

This announcement was much more than an announcement of intentions because it worked. It was a carefully orchestrated series of events. First Governor Dukakis called a press conference, then followed it with an address to a joint session of the Massachusetts House and Senate, and finally ended up with an address to hundreds of cheering government managers. April.

Some of the candidates announce to announce by accident - like Senator Joe Biden from Delaware. It was right after Mario Cuomo decided to announce that he wasn't going to announce. At that moment it seemed like a replacement announcement was in order. Therefore, during a question and answer session with the AFL-CIO in Bal Harbor, Florida on February 13,1987, Biden announced that he was going to announce. His real announcement came in June 1987 when he announced from the train station in Wilmington, Delware. The station was chosen because the Senator takes the train home from Washington every night to be with his family. Get it? Home, family, strong family ties and a train station -- the one visual item which symbolizes Democratic success and Harry Truman. (Since Harry Truman's successful whistle stop campaigns many Democratic announcements are tied to Harry Truman and train stations.) But Biden was a horrible candidate and three thousand announcements wouldn’t help then, and probably won’t help now.

Then there was Rep. Dick Gephardt who ultimately announced at a train station but first he announced the formation of an exploratory committee. As I said before, you hardly ever find a candidate who sets up a committee to explore and then admits they can't raise a dime. The Gephardt committee was formed in November of 1986 and explored until after the holidays. The actual ‘announcement to announce’ came in January when Gephardt announced that he would run, but he would make his formal announcement at the end of February 1987. According to some of the staff there was some dispute as to whether or not they should delay the formal announcement until later in the spring but it was felt that an obscure Congressman from Missouri could not afford to wait until everyone else was announcing, and then get lost in the pack. They felt that if he delayed for a long period of time people would just assume that his ‘announcement to announce’ was the actual announcement and when he finally announced it would be anti-climatic. It didn’t matter, his campaign went nowhere.

Flash forward to 2006. Democrats and Republicans are ‘announcing to announce’ all over the place. Here we are, two years out, and Vilsak, Clinton, Obama, Biden, McCain, Gingrich, Brownback, Giuliani, blah blah blah, are all testing the waters in New Hampshire, Iowa, and the fundraising circuits an New York. But rather than blurting political sound bites, they should be taking a test. And it just so happens that our guest blobber and home spun philosopher, Clay Greager and I wrote a book called, “So You Think You Can Be President?” We believe that anyone who wants to run should have to take our test and passing the test should be the only acceptable way to ‘announce to announce’. Let’s be honest, it is too early to start thinking about who we want to vote for unless there is a way to measure their competence and ability. And we’ve developed that method. So when you listen to the political crap you’re about to encounter for the next few years, ask yourself if they could pass our test—which we will be happy to provide if a publisher is smart enough to buy it. We’re just sayin... Iris
Posted by Iris&David at 9:54 PM

Hey nice blog. Although it�s not what I was looking for. I am looking for info on Payday Loans . I found your blog very interesting