I guess we all have our own Jerry Ford stories. Having been very into covering politics in the most obvious ways (i.e. when someone becomes 'hot', you race over to where they keep an office and try and get a picture, any picture, preferably in color...) in the 1970s, the whole period of post-Agnew through post-Nixon was something I spent a good deal of time watching from, relatively speaking, up close. Having been a Poli Sci major in College, it always astounded me how totally clueless I was. (When was the last time a Pol, save perhaps for Byrd of W. Virginia, spoke in meaningful terms about the "State of nature" and the role of man within?) Little of what I allegedly studied in college helped me understand the ins and out of D.C. politics, but it doesn't mean it wasn't fun. Chasing around after people who feel it beneath them to let you take their picture does get old after a while, so you look for other ways to make it fun, compelling, and interesting enough to keep you in the mix.

Photographers always seem to be competitive with each other, even if they say they aren't. No one wants to have the worst shot, the dullest, least demanding, especially when you are standing right next to your colleagues as an event unfolds. So we all strive to find that little extra "something." It's what usually separates the good from the very good, and the very good from the average. When the first rumors circulated following the Agnew resignation that Gerald Ford of Michigan, an unassuming leader of the Republicans, might be The Guy, I raced to his office to see about getting my two minutes. I was roaming the halls with Dave Kennerly, who was working for Time, and, having often worked together in Vietnam, felt we would get more out of ganging up on someone than merely going it alone. Ford was very collegial and welcoming, but did offer that he thought we were wasting our film on him. We both said that, hey, film is cheap, and we ARE here, so why not? I got my minute and a half next to a big congressional window (love that natural light!), the pictures were later used on several European magazine covers, and off we went to our next potential candidate. That day was when Ford and Kennerly hit it off the first time, forming what would become a long term friendship. That night, Nixon announced it was,indeed, Ford he was nominating, and the game was on. The next day I managed to get onboard the plane which was carrying Ford first to Utah (my home state) and then to Portland, OR, (Kennerly's home turf). He had previously promised to give a speech in Portland, stopping in Utah to see son Jack, a student at Utah State Univ, in Logan. He said he would take the Vice Presidency, but he didn't want to give up the trip (the first sign, I think, that he was a pretty "regular" guy.) Amongst those on that flight were a few soon to be regulars on the Ford beat, including Phil Jones of CBS. It was a fun, unadorned trip, with a minimum of Sec. Service, and other impediments to actually conversing with the Principal. (I think I gave Ford a few tips about Utah, and Kennerly reminded him to say OR-ee-gun, not Oh-REE-Gone if he wanted the folks in Portland not to think him an effete Eastern snob.) With Agnew gone, the liberty to resume our nattering negative nabobisms was restored to the press, and even though Nixon was still Nixon, and probably still is, there was a breath of fresh air in Jerry Ford's mere presence on the scene. We photographed him at his pool in Alexandria, with the family, the dogs, getting a hair cut. He was quite liberated from the vanity and self-importance which graces Washington DC today. It showed in the pictures, and when it came time to try and photograph him, you didn't feel a visceral need to "get him" as he wasn't, by his guileless and forthcoming personality, trying to "get" you. 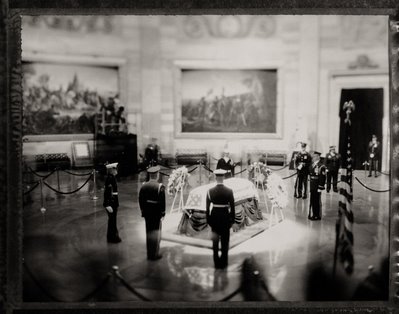 President Ford, his last visit to the Capital

Iris and I spent New Years in Hudson, New York, about two hours north of NYCity, and decided to drive back Monday in order that I might get a few pictures of Ford lying in state at the capital. It was an over six hour drive, including the cheese grits at the Waffle House (I-95 in Maryland: dont stop at exit 100, go to 90 or 85.. they do the grits better). When we neared DC I phoned the Senate photo office to make sure I could get inside the rotunda. I was surprized to hear they were closing the Capital to the public at 6, and ended up grabbing a camera, racing to the stalwart yellow Mini, and having Iris drop me near the Capital entrance. I made it with a few minutes to spare, and was amazed, as I always am, to see the streams of people who feel a personal desire to line up in the cold, and wait their turn to walk past the coffin of a former President. It was touching indeed; Jack Ford, the once young bearded student from USU was there, quietly greeting the well wishers in a very soft spoken, personal way.. "on behalf of the family thank you for coming..." It wasn't done for TV. It wasn't done for the scribes. I think it was done just because the family knew that if Jerry had actually been lurking around the corner, in Statuary Hall, he would have just put a hand on Jack's shoulder and said "son, why don't you thank those fine people for coming." It was the Jerry Ford way of doing things.

People have started complaining about the timing of the Pardon, again. And for reasons I don't get, seem to try and create the aura of Ford complicity in the Nixon naughties. Those folks must not have been spending much time in DC in the summer of 1974. I remember the first moment I heard about the Pardon. Hey, I was ticked off too, but for a different reason. It was a Sunday morning, and I was stranded along with a lot of other high-priced photo talent on the edge of Snake River Canyon in Idaho. It was the Big Day. The day Evel Knievel was going to try and launch his rocket powered Sky Cycle across the canyon as thousands of us watched. We knew by 8 that morning that no matter what Evel did, our stories about him would pale in comparison to the Pardon. Well, Evel's Sky Cycle went up all of about 300 feet, and the parachute deployed, carrying him down into the canyon. He was safe, He was fine. He didn't need nor want a pardon. Maybe a stiff shot of Jack Daniels. But he was in better shape than Nixon. And with that Pardon, things could at least start to be OK again in the country. We had no idea where it was headed, but at least you felt the guy in charge had a better handle on things than the man who had appointed him.

When the hymns started to play Tuesday at National Cathedral, it was a touching moment. It was like reliving all the anxiety and worry of that era. A clutch hitter had come into the game in the bottom of the 8th, connected with good wood, scored a couple of big runs, and in the top of the 9th, he made a great catch to seal the game. Now, thirty years later, that game is long over, and he finally gets to head to the locker room. We'll miss that guy. I'd like to thank him one more time. We're just sayin. ....David
Posted by Iris&David at 10:32 PM

David,
Is this your first shot in 2007.
Nice shot with the front row out of focus...
That good old Aero Ektar did it again huh...

I will always remember the graciousness and warmth of the Fords. Germaine cooked for the Prez at Kennerly's house and in return we were invited to have dinner with Mrs. Ford and attend a Kennedy Center performance of Fiddler on the Roof. After the play we were ushered into the dressing room where I proceded to call Zero Mostel Theodare Bikel as a joke. He almost knocked me down with a punch and Mrs. Ford laughed until she had tears in her eyes).

There were other times as well (you know how the Prez loved photographers!)...the underwater picture of him swimming in the new pool was as much of a surprise to him as it was to the secret service...Kennerly and I cooked up the picture and when I ripped off my clothes to reveal a swimming suit and jumped in after him, it created quite a stir...the secret service freaked out but he took it in stride...

And after i brought germaine's family out of Vietnam, we were asked to come to the Oval Office where the Prez wanted to know all about the rescue.

And when I "attended" the The Betty Ford Center in 1985...Mrs. Ford welcomed me and said she was "waiting for me, what took me so long?"

What a privilege it has been to know the Ford family.

Springroll said...
This comment has been removed by a blog administrator.
10:21 AM

No one could quite possibly have stated all this in a better fashion, and a great shot with the Burnett Combo.The rush was for a purpose..to get you there at that ONE moment. Any other time likely wouldn't have worked. Good show,My Man..Good show.. I also have experiences with protectees; like Prince Charles breaking from SS and DSS for the photographers.THAT was a moment in time..and Mr. Ford giving me an entire two minutes once and HE was concerned if the light was good enough. They just don't make them like that anymore..

Nice post, its a Super cool blog that you have here, keep up the good work, will be back.