Peter, and Olivier, and lil' ole me

It was my intention to write Christmas memories, but that will have to wait. Today David told me that one of our dear friends died.  Peter Howe was a photojournalist who I met separate from David, and was he cute, yes!  There were two photographers who I met and bonded with even before i knew David.  They are both gone now. What a loss for everyone who knew them..  Olivier was a French photographer who died in the early 80’s. He was in El Salvador and he stood up instead of staying under cover.  He told me that he wanted to do what he thought David would do, but of course David would never have done that.  He was shot and brought back to Hialeah Hospital where he was supposed to be alright. Until he wasn’t.  I visited him every day and was sure he would heal. He didn’t.  A few days after I arrived in Florida and was staying with my mom, she came into the living room and said, “I’m so sorry about your friend. The one who was in the hospital.   He passed away.”  That didn’t make any sense because everyone expected him to get better.

Peter Howe was born in England. He was a former New York Times Magazine and Life magazine Picture Editor, and the author of two books on photography, "Shooting Under Fire" and "Paparazzi." He was also the author of the Waggit’s Tale series, about an abandoned dog and his pack who live in Central Park.

These two characters were nonstop  fun. Two quick stories to give you an idea:

The three of us went to the Republican Convention in 1980, in Detroit. They were shooting, and I was invited because I was the Director of Security for that year's Democratic Convention in New York.  We hung out the whole time, and entertained each other because the Republican Convention was, you guessed it,  pretty dull.  At one point we went to a reception for Delegates.  The two of them were quite adorable, and the older female delegates couldn’t resist knowing who they were, where they were from. It is unclear how it started, but at one point one delegate asked Olivier a question. Peter jumped in and told her that Olivier's  English wasn’t very good, so we started to do "simultaneous translation."  First the woman asked Olivier a question in English, and Peter (who IS English but also a man of the world) turned to Olivier and repeated the question in English English. Olivier then turned to me and answered the question in English but with a heavy French accent.  I then turned to the woman and answered the question in English. This went on for at least a half hour with other female delegates participating.  Needless to say, we spent the next three days laughing until our stomachs hurt.

Second story.   Peter called me one evening because he was shooting in Denville, NJ and I was staying with my mom at our old homestead in Boonton, NJ, only twenty minutes away.  The event was a heavy metal rock concert.  Peter explained to me that we needed to wear ear plugs because the venue was small and the concert was going to be really loud.  We put in our plugs and I waited in the rear for him to finish.  As he walked up on the stage I saw he was bending down.  His earplugs fell out and he stepped on them, making it impossible for him do do anything but shoot while his ears bled.  After the concert we went out for a drink, but we were yelling, instead of talking, and the bartender finally asked us to leave.

Olivier Rebbot helps Peter Howe up to a photo position, and further merriment 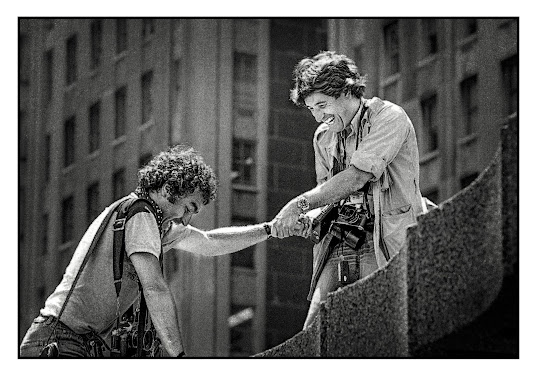 These stories do not in anyway due justice to the essence of the these two amazing talented, sensitive, men. For whatever reason photojournalists seem to be exceedingly attractive.  They don’t have to be handsome because they are mysterious.  But these two guys were sexy and cuddly, if thats possible.  The three of us were playful friends.  Always ready to do anything for a laugh, it did not matter the event. Sometimes they were shooting and I was on the other side of the ropes making sure that they would have the picture they wanted to take.  We were pals.  Even though I may not have seen them for months at a time, we always picked up where we left off.

It has never been easy for me to say goodbye, so I won’t. I will just love them forever wherever they may be.  We're just sayin'... Iris