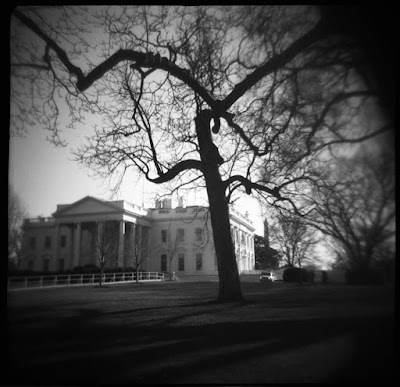 There is a lot of lip service paid to the idea of the American peaceful turn-over of Presidential administrations. And in the era of cable TV and other blobs, the lip service kind of turns into yap-service, a nonstop yapping which tends to deaden the senses of all but the most dedicated event watcher. But yesterday, having spent much of Tuesday freezing my heinie off at the Capitol waiting for that hand-off to take place, I strode back into the Northwest gate of the White House, the same way I have done for over forty years. You wave your pass at the guard gate, they buzz you into the heated hut where everything runs through an x-ray machine; you swipe the pass over the electronic code key (and enter your own personal four digit code), pick up your gear from the x-ray machine, and voila, you are inside the grounds. It's actually less difficult than getting into any of the sky scrapers on 6th Avenue in New York, whose new, and patently ridiculous “security” measures are something out of a bad movie. Once you step out of the hut, you are on the long, curving drive way which heads up to the West Wing. You pass Pebble Beach (formerly a garden area, now permanently occupied by the television cameras and lights of the networks, so their correspondents will have the White House as a backdrop for their “stand-ups.” Then, a few dozen more steps, and you enter the Press room. You are in the White House, even if this Press room is the only place on the property you are allowed to go without an escort. 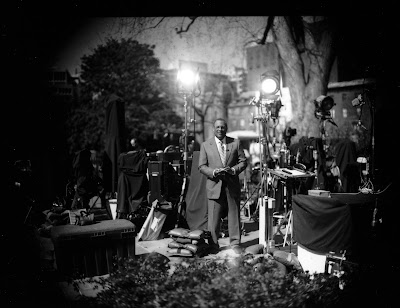 Fox News' Wendell Goler at Pebble Beach
But yesterday's little meandering walk up the drive - it's the White House - you always meander, and never run., did strike me again, in the simplicity of the moment. I am always, I have to say, moved when I pass through those gates, aware of the sense of history which surrounds the compound. It is a living testimony to the best things this country stands for, and the worst. I was there briefly during the Johnson era, spent lots of time during the 73-74 Watergate years, and significant amounts of time since Ford assumed office. Yesterday, the first workday of the new administration was another of those watershed moments. I began covering the White House a full decade before many of the new staffers were even born. Our afternoon jaunt over to the Old Executive Office Building to see President Obama sign 3 Executive Orders, was punctuated by those moments where the long present photographers explained to the young staffer the best way to get there, where the elevator is, all those basic things which are a question of experience. And so it was, once again, after all the pomp has quieted down, and the perversely overdone “Security” has finally disappated, that the sense of the place, the enduring, unchanging calm of the White House was restored. There will surely be some moments to cherish going forward, and just as surely some terrible ones, products of a world which gives us the likes of Bernie Madoff, Bin Laden, and Kim Jong Il. But the knowledge that the place has been there for some two hundred years (come to think of it, we're approaching the Bicentennial of the Burning of the White House by the British (actually it was in 1814) maintains a sense of constancy in an age sorely lacking that kind of grounding. 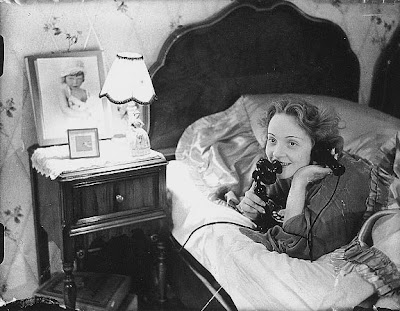 Marlene Dietrich on the phone with her daughter, by Erich Salomon 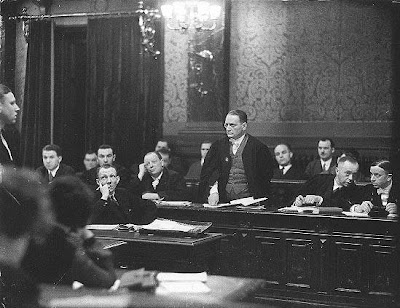 The Berlin Court 1937, by Erich Salomon
I have this thing about some of my cameras. Most of them I purchased new over the years, taking them out of the box, wrapped in plastic and fine paper, and creating for those cameras the lives that they lead, capturing little snippets of time. I remember with some precision, just which camera I used for which story along the way. But some of the gear I use has a history far longer than my own. I own some German lenses which were made in 1925, and used on the kind of cameras which were employed for the very first modern reportages, in the 20s and 30s. I found (like all things) those cameras on eBay, the product of someone who was cleaning out a closet, or handling the estate of a friend. They come with a whole history of their own. Who would have even owned such a camera in Germany in the late 1920s, and into the 30s. These cameras were originally designed to take glass plate negatives.. and later modified for film, but largely they were owned by people of some means, and presumably the occasional journalist. Photo reportage was just starting to become something of note in the 20s, with German and later French magazines leading the way in taking their readers to places they otherwise wouldn't have had the chance to visit. 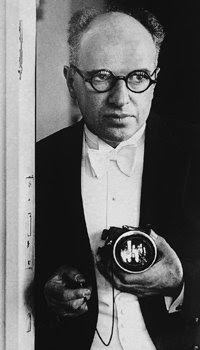 Erich Salomon and his Ermanox 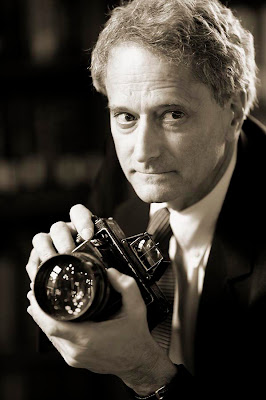 DB and his Ermanox (cr: Cameron Davidson)
Erich Salomon, who was one of the inventors of modern reportage (there were no books, classes, or online discussion groups to take advantage of, he simply DID it on his own) owned not only the cameras, but the will and inventiveness to use them. He made candid photography what it has become today. So when I pick up one of my old German cameras, I can only wonder what it must have seen. How lucky am I to even have the chance to hold one of these cameras in my hand, a camera that has surely seen and lived through some of the tumultuous moments of modern history. The Weimar Republic, the rise of Nazi Germany, World War II, the post war reconstruction, and the Cold War. What secrets lie inside that little black box? What moments has that glass passed through its elements? I would love to have a conversation with that lens, the one conversation that I just can't quite figure out how to achieve. This Monday, I walked by the White House on the day before Inauguration, the last day of the Bush era, the eve of the Obama. From the Pennsylvania Avenue fences, I looked again at that stately mansion, as I often do. Being the dead of winter there are no leaves on the trees. The craggy branches seemed to take on an even more sinister Tim Burton-like presence. It's as if the mischievous trees are just waiting for you to turn your back, so they can reach out, grab the gardener's golf cart, and fling it across the front lawn and into the fountain. I'm not much of an arborist, but I have to assume those trees have been there since John Quincy Adams, Andrew Jackson, or Abe Lincoln. What must those trees know of us? We have our secrets, our “affairs of state” and we think those reign supreme in our own time. Yet if you could somehow sit down and have a cup of coffee with one of those gorgeous north lawn White House trees, maybe they would, just like the Dustin Hoffman character Jack Crabb in Little Big Man - telling modern day folks about how he fought with Custer, enlighten us just a little bit about ourselves, and about the things we think we know. We never really know as much as we think we do. There is that wonderful conundrum about knowledge. It always falls just short of what it thinks it is. But I can tell you this, if my 1920s camera decided to sit down for a rest in the shade of that White House tree, and the two of them started spinning yarns, I sure would like to be there. We're just sayin'...David 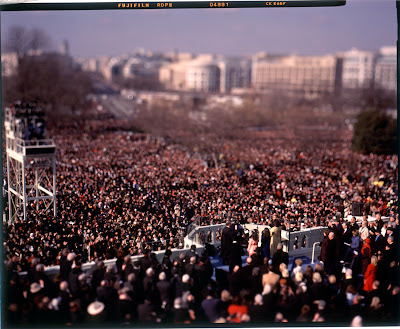 Barack Obama being sworn in, the Capitol, January 20

as always, click on a picture to see full size
Posted by Iris&David at 2:49 PM

David,
its time for you to write a book.

agreed...and i loved the portrait of wendall..

I am, again, amazed at the sense of a moment either stopped in time, or recreated at doll-house size but with exquisite detail and clarity. Wow.

David,
This is one of your most beautiful entries. I was so touched by your historic notes on previous White House moments, your continued appreciation of your access to the W.H. space, and the details of your cameras. Clearly the book is writing itself. Please continue!

I was very happy to see you on CNN during the swearing in of the staff just after Biden delivered his dig on Chief Justice Edwards.

Poetic post David! An Ermanox is my dream camera, too.
Granville Withers

David, I've spotted you taking the final image. While I guess this was taken just after you made that image.

it's a crop from this interactive 140 meg stitch from the inauguration.

David,
Funny thing is that not too many photographers of your calibre know how to string two words together. You make a handsome exception. Fine post, beautifully written and educational. Thanks David and thanks for showing that film is still an option.