One Nation, Under a Supreme Being...

Over the last few days we have heard quotes from some incredible rhetorical prose. Among my favorites are things are those said by George Washington, Abe Lincoln, John Kennedy, W.H. Auden and George Bush -- just wanted to see if you were paying attention. These words, however, are the ones I like best (I took a little license): “One Nation, under a supreme being in any form, (the idea of something greater than ourselves has always appealed to me), indivisible, with liberty and justice for all.” Liberty and justice is my favorite part.

What is it about Obama that has captured the heart of the nation? Is it the cool, the calm, the words, the youth? Are people outside of Washington riveted to their chairs/beds relentlessly watching the 2 million people on the Mall? Is it a National holiday? Do we get mail? I am confused about so many things on this wonderful day. Like why did they close all the bridges in and out of Virginia and what makes people travel thousands of miles to stand in freezing weather with millions of strangers to watch an event (regardless of magnitude) on a big TV screen. When the reporters say “to see history happen before their eyes,” it’s not really true. History happens somewhere near where they might be. But they are not close enough to have anything historic happen ‘before their eyes’. Yet just being able to say you were there seems to be enough – just not for me. Pay no attention to the cynic writing this piece – I’m very excited by this transfer of power. I just can’t be that excited cold and in a crowd. 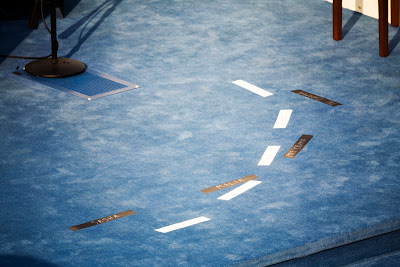 stand here, please...
Actually, one of the things I have always yearned to be was comfortable standing shoulder to shoulder with millions of people I don’t know. Anyway, I forged across the Potomac and went to watch at my pal Johanna’s. I was determined to defy the odds and leave Virginia. I made it in time to see all the notables walk out from the Capital. It was admittedly, thrilling. It was also wonderful to watch the transition with good friends. That’s what this inauguration has been for me – reunions with old friends. Admittedly, I decided not to participate in any official events, including celebrity parties. This might not make any sense but (whenever do I), it’s like when you celebrate a Bar or Bat Mitzvah and all you can think about is the party rather than the service. I love the parties, but this is such a difficult time for our nation I just wanted to be with people with whom I shared both happy and difficult times in and out of government. While it is true that I could have found a party or ball that included many of those people – you then have to deal with crowds waiting on lines and who’s important enough to have been invited. This President (I like that better than President-Elect), talks about how we all, regardless of race, religion, financial status, or gender, deserve to be treated with respect. He has never had that conversation with security or a party planner. So, I choose not to play that Washington game, and instead partied with equally important like-minded people. 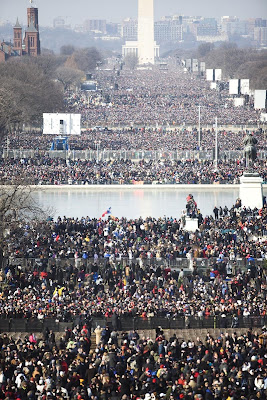 the two million on the Mall
President Obama’s inaugural address was predictably brilliant. Poignant, intelligent, and dramatic. The two things I found most moving were his statement about reaching out a hand to any country with an uncurled fist, as well as his insistence that we will not tramp on civil rights for political expediency. I’m sure that one made former President Bush wince. And wasn’t it poetic that Dick Cheney, who has crippled this nation in so many ways, was in a wheel chair. These powerful statements were not only important but the essence of both a domestic and foreign policy. He was sure good. The whole ceremony was good. The whole nation is good. And I think the whole world will be good. And so, I made my way back to Virginia, baked a bread (always do for a celebration), and now look forward to seeing more friends at our house for our own personal Ball, later in the evening. We’re just sayin’….Iris
as always, click on the picture to see full size
Posted by Iris&David at 8:24 PM

"And wasn’t it poetic that Dick Cheney, who has crippled this nation in so many ways, was in a wheel chair"

I thought that was Dr. Strangelove?

Anonymous said...
This comment has been removed by a blog administrator.
9:03 AM

Out here in Wisconsin, far, far, from Washington, we all sat around TVs and watched. Schools suspended classes, businesses closed, for one day many of us stopped running around in circles and together hoped for good things for our nation. May it be so.
Reeder

Reeder, I'm glad to see you treated it as a national holiday. It was a great day. Not too cold for you I hope -- just keep warm. We are always thinking about you