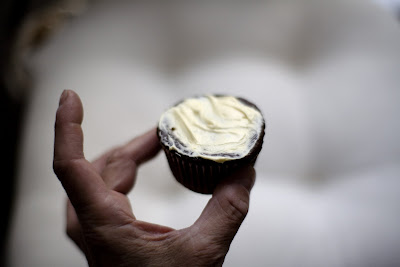 click the picture to see full size
I have to admit that while I would like to think of myself as a reasonable person in the kitchen, I'm probably not quite the FoodNetwork accolyte that I sometimes perceive myself. I usually manage to slice onions and carve a turkey without significant injury, though I am still rather envious of the Emerils of this world who can grip a 1/4 of an onion in the tips of their fingers, and slice it without the river of blood turning it to oignons sanglant. The first few slices, anyone can do it. Trying to get those last couple of thin slices, that takes practice and concentration. Cooking does require one of those amazing combinations of mental agility (to perceive of the flavors and textures and how they'll mix) and physical ability (to know just how to cut what, and how to mix, and swirl them to make the magic.) Sometimes, you can almost imagine what it will taste like when its still just a lump on the cutting board. But you need to keep that target in mind as you move forward.

There are, of course, a lot of recipes which arent really rocket science, though it remains one of the surprizing elements of human endeavor, just how many lousy cooks are out there (and often related to your friends.) I had a junior baking set back in the late 50s, and it included handy little kid-sized boxes of cake mix and brownie mix, and a tiny 5" x 1/2" pan to bake them in. 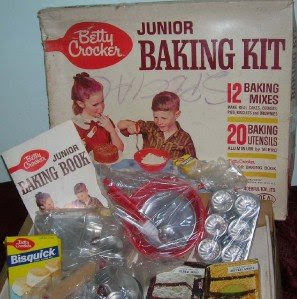 I remember the difficulty of trying to get enough frosting on the lower layer of cake so that it didn't pull apart the top one in that epoxy like fashion which too-thin frosting can do. I'd been well schooled in these things given that my mom, a pretty good cook all things considered, would make her peanut butter and jelly sandwiches with only just enough peanut butter to block out the surface of the bread. Two, perhaps three molecules thick, that layer of peanut butter had virtually no taste, other than the slightest perfume of peanut, but retained that ability to bond two pieces of Wonder Bread in a form so immediate and sticky that there was nothing to do but try and eat the damn thing. I marvelled at the people like Dick Yardley whose sandwiches fairly oozed jelly, and peanut butter in swirls so full it resembled the cover of a Duncan Hines cake mix.

The brownies and cakes were always my favorites. For some reason osso bucco and lasgna weren't really that attractive to a 5th grader. I knew how to plunge a toothpick into a brownie pan and determine whether or not it was done yet. It was exciting when you had to make that decision to pull it from the oven, and hope you'd done right. Licking batter from the bowls: who didn't like that! And while we'd pretend to get all the batter into the pan, there was a lack of discipline which usually left a few good tastes for a swirling forefinger.

But I married a good cook, and while I'm kind of like the Corporal doing KP duty, peeling potatoes, skinning carrots, I don't really spend a lot of time actually producing much anymore. So on Friday, doing one of those quick runs to Safeway when you've just gotten back to town (eggs, milk, a few apples, a loaf of 8 grain bread), I passed by the baking section, and was entralled all of a sudden by the cake mixes. One of my favorite Food Network shows is Sandra Lee's Semi-Home Made, the lady who doctors boxed and canned goods and creates something nearly passable for scratch. I hadn't actually thought there would be a lot to consider about cakes, and cakes really don't interest me that much anymore, but Cupcakes, wait, that is worth a look. The big cupcake rage the last couple of years has, as it did with bell bottoms 3 decades ago, created a new inflated market for things which probably needn't be that popular. In New York, and even the suburban DC stores and bakers, you'll pay three or four bucks for a single cupcake. They are usually, to be fair, on the large size, and swathed in frosting, though I find that places like the Cupcake Cafe on 9th Avenue use food coloring instead of actual flavorings for the icing. Close your eyes, and you'll be hard pressed to tell the difference between the pink and the green.

Well, I couldn't help myself as it turned out: I bought a box of Chocolate Fudge cake mix, a set of 50 "normal" sized cupcake papers, and a tin of "butter cream" frosting. I have no idea that we even keep the stuff in the house that you could make these things from scratch if you wanted to. And for this first time in twenty years baking project, I figured that a mix was better than nothing. So, when I got home and announced I'd be making cupcakes, there was a hush drawn over the kitchen multitudes. Disbelief? Wonderment? Skepticism? All of those I suppose and maybe a little bit of fake enthusiasm. I called Jordan in Boston, announced my intentions, and she told me of the new 'thing' in baking: replace the eggs and oil with a can of Diet Coke. Cuts down on a lot of the stuff that they say is 'bad' for you. So that's what we did. Or rather I did. The view of the hand mixer blades swirling through that chocolaty batter was one to keep. The beautiful striations of batter, the ring upon ring of wave like deliciousness. Even without baking a single cake I'd have been happy at that spectacle. Then I grabbed a measuring cup, and starting pouring the batter into the 24 cake papers, in two pans. That was a joy, too. Watching the batter fill each cup was like one of those vids you see on "Unwrapped" when they show you how Reese's Peanut Butter Cups are made. All yum, all the time. It took a while longer to bake (was it the Coke? maybe..) but in the end, there they were, two dozen little chocolate beauties. Grab a knife, and schmear a little frosting on each. Frosting is the most fun, the most sculpting like of the cake functions. We proceeded to eat them, a mere bite or two per cupcake. They were small enough that they weren't terribly guilt inducing, just full of that wonderful combination of "Hey! I made that," and "yummm." They look pretty good, too. We're just sayin'...David
Posted by Iris&David at 5:59 PM

not again... surely all of those 5 syllable ingredients in diet coke would be healthier than eggs and oil. I'll take a little cholesterol with my eggs and oil any day. At least they have pharmaceuticals for those HDLs/LDLs already.

Would you like a little diet coke with those hash browns?

I can remember the days when there was nothing in our campus kitchen but white bread, green olives and mayo. Add a little salt, and it sure tasted like a chicken sandwich to me. Cupcake substitutes must have been created by a college student.