There is one street in our neighborhood where you can actually park your car during the day. Unfortunately I will not give you more information than that because the competition is fierce for every space and so it is information that I am better off not divulging – to anyone within 100 miles. Last Friday I was driving across town and, having heard rumor that there were some long term spaces around the corner, I decided to take a look. And there was one fairly small space open – so I took it. I was so excited to have found it that I really didn’t really know what to do to celebrate. I sat there for a while and then I called a few friends to share the news. “How long do you have?” They asked. “Four days”. I replied. “Wow,” they said. They were right.

This parking is not without a few complications. Like, you have to move the car for street cleaning on Monday and Thursday between 10 and 11:30am. The strategy is to sit in your car until the street cleaner or parking Nazi arrives and then move it to the other side of the street while the cleaning ensues and then you move it back to the space where it had been parked. People actually sit in their cars for that hour and a half and then don’t worry for another few days. A lot of books get read. 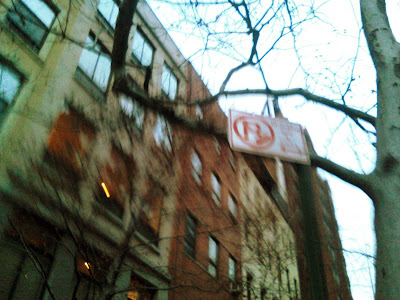 Watch out for cleaning, Mon/Thu 10-1130
I chose not to participate in this ritual. Regrettably. I put the car in a garage. But I did want to see what happened between those “street cleaning” hours so we went back at about 11:00 a.m. to take a look. Sure enough, people were sitting in their vehicles waiting for the time to pass. The street cleaner had been and gone but in NY, you don’t leave your car when there is any chance that the wicked “ticketer” might appear to increase city revenue by $65. 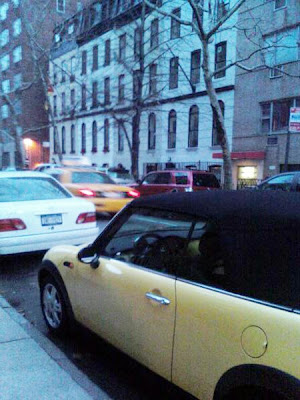 The Bumble Bee, at a Secure Undisclosed Location
“It was stupid not to wait,” I said. “I could have listened to a book on tape or read the newspaper.” He agreed. As we were walking around the corner we happened upon some workmen who were delivering sheet rock to a customer. They were occupying at least one space which they would likely be vacating later in the day. “Let’s just ask”. I said to David. Richie, the workman, said that they would be leaving around 4 and if I wanted the space he would wait for me. “You have the Mini, right?” I have no idea how he guessed that, but I confessed I did and thanked him in advance.

It occurs to me that these negotiations are not unlike those happening in Washington. While it is true that parking a car is not getting a job in the Government, ‘who you know’ and ‘being in the right place at the right time’ is critical to your success. For example, there was good news from the White House-elect this morning. Pete Souza, a talented and experienced photographer, is going to be the Official Obama photographer. Pete did a great book on Reagan and covered Obama from the time he went to Congress. He was the right person, who had done the right things, for the right guy. He will have to put an office together. That means he will have to select from hundreds of people, those who will get positions in the White House photo office. There is, to be sure, not uncomplicated maneuvering among all the prospective photo staffers. To be sure, people who know people are calling those people to make a case. This office is no different from any other. “Who do you know?” and “Who have you spoken to?” Are those the sentences of the times?

Last week I got four calls from acquaintances inquiring about if I was going back ‘in.’ That’s how people from Washington talk about a job in government. Like you’re about to serve some kind of sentence in an institution. When I tell them I’m not, that doesn’t end the conversation. “Well then, who have you talked to about what’s going on, and will you call so and so and see if they can help me?” Hard as it is for me to admit, and I share this, I can’t really be of any help because other than Hillary, I don’t know anyone in charge of anything. Although until yesterday my best shot was Bill Richardson. “So can you call Hillary?” they ask. “Absolutely not,” I reply in the kindest possible way. The politics are much too complicated and not unlike the car. This Secretary of State has to consider all the people who worked in her Senate Office, all her campaign people, all the Obama people who gave money and have expertise, and all the people who gave her money who have people they want to have jobs.

The State Department is no different anywhere in the new Government, but those people who were part of the Washington scene have a bit more pressure because they have people who live in Washington who expect to be compensated, (often for no reason other than they have geographic proximity) so it’s a bit more immediate because they are in your face.

To be sure, transitions in government, like finding a parking space, are not my favorite activities. They both bring out the worst in people. I much prefer parking in my cousin’s garage (the Aston-Martin remains in my space—but that’s another blob), or being in charge of hiring people. It seems to me that there are better ways to spend one’s time than waiting for someone else to move a car or make a decision about a position – but it’s all a part of a not uncomplicated logistical game. We’re just sayin’….Iris
Posted by Iris&David at 2:42 PM

Pete is a wonderful choice. I couldn't be happier!

I think every one who knows him feels the same. It's about time there was a real shooter in charge

Anonymous said...
This comment has been removed by a blog administrator.
7:21 AM