Black eyed peas have always been an unlikely celebratory dish because, let’s face it, they taste like dirt. The first time I went to a New Year’s Day party it was hosted by friends from Georgia. They served ham, cheese biscuits grits, cream cheese with pepper jelly (another dish I had never even thought about trying because I had never heard of pepper jelly – and the only thing we ate with mounds of cream cheese was a bagel). And then there were black eyed pea’s, cooked forever in pork fat (probably), and served in a silver turene. Despite the lengthy preparation and elegance in delivery, they still tasted like dirt. For years I went to New Year’s, and other Southern celebrations hoping to develop a taste for the little white beans with a black dot, but it never happened. People often develop a taste for unfamiliar foods like Gefilte Fish, bacalau, or octopus, (maybe it’s about the fish), but no matter how often the attempt to savor the flavor, they still make me choke.

This year was the first time in many years that we didn’t have to think about how we were going to spend it. A dear friend got married and decided to do it with friends, music and overlooking the skyline of New York. 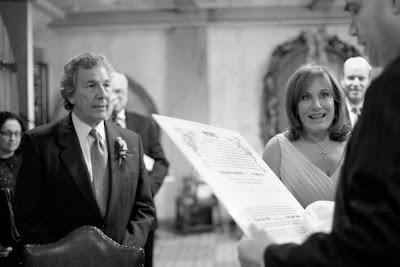 David and Karen, as the Rabbi reads the Ketubah
For a long time we hosted a party for close pals and anyone who had no place to go. But then, a few years ago, we started losing friends (we knew where they went, but we didn’t want to go) and my heart just wasn’t in big celebration anymore. Last year we were in Northern California staying at the Tuscan-like villa at long time friends. We joined their children for a great dinner with a few of their pals. There was great wine (he owns a vineyard called the Alpha Omega Winery—be sure to look them up), wonderful food and mostly nice people. I mean that in the kindest possible way because there was one guy who was incredibly obnoxious and in our morning wrap up, our gracious host could not remember why he had extended that invitation. But we had a good time. 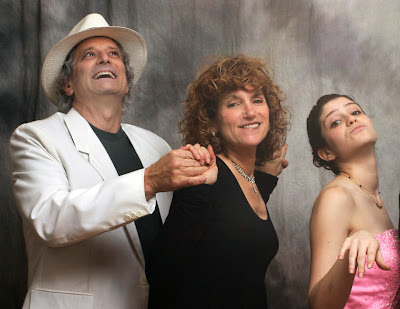 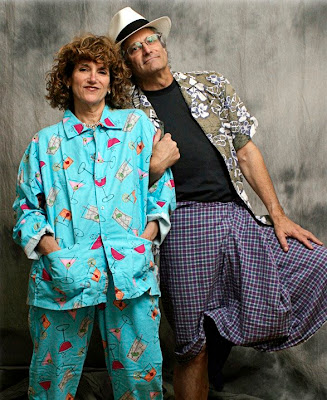 Dress down...
Try as we might we can’t remember what we did two years ago – we know where we were but not what we were doing. Three years ago, Jordan decided to come home with her then boyfriend to have a “real” Washington celebration. We made arrangements to have dinner, dancing, and fireworks at the Kennedy Center. At about 6pm we mutually decided we were not in the mood to go. We rushed out to the market (by then there was not much food left on the shelves) bought the last tenderloin in Arlington and surrounded it with some elegant vegetables and potatoes. We dressed in formal garb for the dinner and changed into pajamas for dancing and welcoming in the new year. It doesn’t take much more than good food and good company to do any welcoming.

And speaking of good food and the New Year. Last night we joined friends at a Greek restaurant they always liked before it moved – recently -- to a larger location. We thought it sounded terrific and was worth a try—besides we love spending time with these people so food is never an issue. The restaurant is called Kefi on the west side of NYC. The good news is that the food was excellent and pretty reasonable. Of course, we had four desserts and two bottles of wine so reasonable is relative. The bad news is that it was noisy and they squeezed as many people into a small space as was possible. The place isn’t small but there two tables in a space big enough for one. But even that was workable—we were willing to stand to give people access to their tables and we used our utensils with arms at our sides. Admittedly, we were having a great time catching up on our kids, our work, and just life in general when our waiter (a competent attentive server) came over an told us that the manager, maybe owner, Kosta, needed our table and wanted us to wrap it up. He was courteous, and maybe he didn’t say it exactly that way, but that was the essence. We were astounded. When we made the reservation no one said that we could arrive at 7:15 but they needed the table back by 9 or 9:30. When we go out for an evening, we hardly ever think about putting a time limit on our fun. Howard (a most intelligent, articulate and eloquent fellow who does not suffer stupidity very well), was most logical when he talked to Kosta with our complaint. “ Do you accept the idea that at a certain point you don’t take anymore reservations or you don’t tell customers you have anymore space.” With a shrug of shoulders, Kosta agreed, but agreeing and actually caring are two different things. Kosta had dollar signs flashing in his eyes and for him, old customers who had lingered too long at a table he wanted to turn over, were just not that important. It was a genuinely lovely evening that ended on a bit of a disagreeable note. And although we agreed we probably would go back on an evening that was not so busy, we are not rushing and if there is an alternative we are more likely to do that.

Enough of Kosta and his less than diplomatic approach to good customers and back to New Year’s celebrations. They are over. I haven’t yet signed a check with the year 2009 but that will happen soon enough. It would be difficult to celebrate New Years Eve on a day other than December 31st (as we do with other holidays). Oh, we could simply skip it and go directly to Chinese New Year—which always has excellent food—but the New Year is a time that is so “in your face” it’s impossible to avoid. Maybe because it is a reflective time or maybe because it is a time when we are all hopeful about the year to come, but it is nearly impossible to skip or move it. Every year I like to think about how I want to spend my time and how I can make a difference in the universe. That lasts for about a week and then I usually just make a bread instead of an impact. But this year I am resolved to explore anything about which I am passionate – whether it be personal or professional. And if everyone I know did that – well, we would certainly have more smiles. We’re just sayin’… Iris
Posted by Iris&David at 4:36 PM

Not just pork fat, hog jowl. Must be hog jowl. We southerners tried to train you, and we failed!

Well, my daddy's from Alabama and for years I served black eyed peas with the ham but no one ever ate them. Then I tried chili--both vegetarian and beef. But no one seems to want to eat their goddamn beans. I give up.