In the 60s, the great guitarist Jimi Hendrix asked us “Are You Experienced?” We all thought we were, though in truth, you think so? I know I was a total dork. I was experienced in worrying about things like “will the grown ups find out we’re screwing around?” when screwing around meant stuff like crank calls, and throwing water balloons at cars. Experienced? Well, not so much. But there was, as I grew up, a series of bogus companies which used the “experience” concept to try and sell themselves to the public. They were so unbelievably successful that inspite of two margaritas in the last two hours, I can’t think of a single one. But I know they existed. Sort of like the “Alan Parsons Project” except instead of a mere project, this was a real experience. Not the kind of thing we spend so much time worrying about of late, but occasionally something sets you off.. taps you on the shoulder… and says.. “experience…”

Iris and I had one of those the other day. We were en route to David and Karen’s wedding in West Orange (yes, its right next to Orange, and not so far from East Orange), and we found ourselves on Route 46, just where it meets Route I-80. I-80 is, of course, part of the vast network of 6 lane roads known broadly as the Eisenhower Interstate Hiway System, conceived of by the President/General as, no doubt, in a way that only a Logistics guy could imagine, a network for delivering the goods. In 1944 those goods would have been tanks, rations, ammo, and fuel. In 1956 and beyond… it was cars, food, and other consumer goods for which the hiway system provided a delivery channel. Pretty cool, I guess, if you weren’t used to having so much STUFF, like we are now. 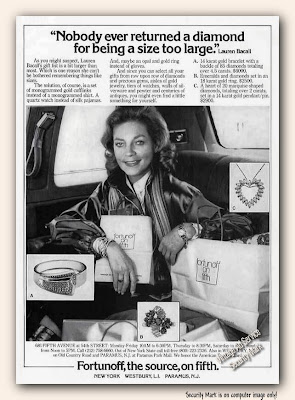 When I married into the Dubroff family (Iris is a Dubroff on her mom’s side—Rose Groman -- and as all Jews know, the mother’s side is the only one that really counts, right?) I was introduced to a different kind of experience. The shopping experience. Even at our wedding, at her mom and dad’s house in Boonton NJ, there were traces of the shopping. Part of their preparations including covering a dozen tables in top grade paper table cloths. Yet, after they had opened the package, and cut them to size, they realized that it didn’t quite work, and STILL took them back to the store as “Returns.” I’d married into a family of world class shoppers, women (mainly) who knew the art of returning or more precisely, the art of purchasing and returning, sometimes in the same day, sometimes twice in one day. There was never any doubt about the ability to return an item in this family. If need be, you’d perhaps have to call in the heavy artillery (Aunt Sophie, who never took No for an answer) but it was just understood that purchases that came in were on trial, and had better behave, because otherwise.. it was .. whoosh… back in the bag, and back to the store for a refund. I wanted to write a memoir ten years ago when we moved to Boonton for a year, and lived with Nana. I even had the opening line figured out: “In the summer of my fiftieth year, I moved in with my mother – in – law.”

It kind of changed my idea about commerce in general. I’d heard of the Right of Return, but usually that meant something to do with diasporic Jews returning to Israel. I had no idea that it was something which had to do with commerce and floor staff who are able to just put things back on the shelf for another prospective buyer. So, now into my third decade I have come to appreciate all the effort that goes into being a full time shopper. Now I have a real look around when I come into a shopping Mecca, and try to appreciate some of the potentials for savings. It’s not something I immediately understand, but I do my best, and as it happens, some of those North Jersey venues where Rose shopped in her heyday, the 70s through the 90s, are still cookin’ with gas. And so it was that on Wednesday last we ended up at “The Source.” Not just any source, of course, but The Source.” If you spent much time around New York in the 80s, you’ll remember The Source as being none other than Fortunoff, being hawked for on the radio, TV and the newspapers by none other than Lauren Bacall. Whether it was fur coats, silverware, linens, or anything else related to your house, the one classy and wonderful place to purchase it for what were always competitive prices, was Fortunoff. And Betty Bacalls’ throaty and sexy voice did nothing to deter you from dropping some coin there. I’m sure if they’d bothered to ask that Rose would have been happy to do an endorsment. She could have emphasized the vast array of goods and the main point, as she once told me “…when Fortunoff has a Sale, it’s a SALE!” The voice of authority. 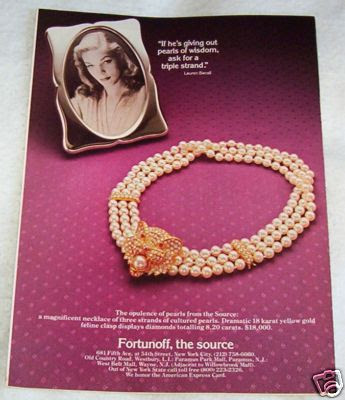 We were looking for some pillows for the NY apartment (yes, this is the thing I most love doing in life, with the sole exception of checking out cameras at B&H), so off we went to Fortunoff. The place is huge, and when I finally got tired of the looking, I just went back to the coffee maker area, and studied those very cool little “use a capsule of coffee to make one cup at a time” machines. They really are the coffee maker of the new century. And then there are the pillows, soft, medium, firm, extra firm. The small applicances, the blankets, the rugs, the cutlery. Well you get the point. And at each turn, as we changed direction and wandered into a new amazing array of goodies, there was a voice which seemed to chime into my ear something like “I’d wait for a sale.” Or, more to the point “this is not really nice enough for you.” Or, surprisingly “they must have sold all the good stuff. I’d wait till the next truck gets here.” They were all the voices I know as Nana. She loves to shop, but she hates a bad deal. And the funny thing is, you never really know what’s up and what isn’t until you have a Rose to guide you. It should probably require a C or D ticket, like Disneyland of yore, and imprinted on it would be the words “The Rose Groman Shopping Experience – Shopping Like You’ve Never Seen Before.” Fortunoff seems like the perfect place to start. Nana is living in Bainbridge now, and hasn’t been to Fortunoff for some time, but I am sure that were she to walk into the main foyer, between Silver Jewelry and Coffee Grinders, a magic voice would hop onto the intercom and announce that “today shoppers, you are in luck, today YOU may actually have the Rose Groman Shopping Experience…” People would drop their shopping baskets, and race to the door. No one would want to be left out. It is, after all, the Experience! We’re just sayin’… David
Posted by Iris&David at 12:01 AM

Use online printable coupons for local shopping and save your money.

I have friends who just this past month committed the biggest return I have ever heard of - their Christmas tree. Went to the nursery, picked what they thought was the perfect tree, brought it home atop the car, upstairs, cut off all of the mesh so it opened up and....decided it was not perfect. Of course, the tree cannot be put back in the mesh, but back on top of the (small) car it went, and back to the nursery it went to be exchanged. - Brian Snyder

You guys pour so much into this blog. I love it.

I saw a man returning a Christmas Tree to a Home Depot on January 3.