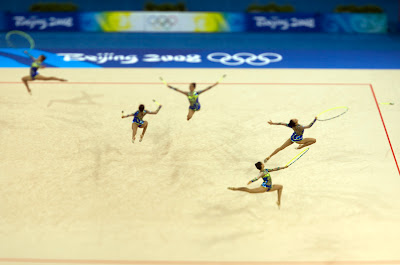 I’m back on the jumbo jet, flying eastward across the Pacific, back to California, and later this afternoon to Denver, where I am quite sure my re-baptism into American politics, and culture, will be more of a shock than I suspect. I had a lovely room at my ‘hotel’ in Beijing. A pair of extremely comfy beds in which I spent far and away too little time, a proper desk and chair, a very modern bathroom with a shower head which I tried finding a manufacturers name one – couldn’t – which would happily find a home in our bath in Virginia. There was a forty-something inch flat screen TV with 45 channels in Chinese, and one, Ch. 9, who did some broadcasting in English, but whose content was invariably que’d to the Party line, and made watching a trying experience. Mind you, I’m not unacquainted with VOA, if you want to talk about Party lines, but whilc they can give you insight into the motivations and positions of the host country, it’s not always the most agreeable viewing. The room was in a complex of buildings called the Beijing Conference Center, and if you were trying to set up gathering of engineers to respond, let’s say, to the sudden increase in business from outsourcing American companies, and need a retreat to get away from the hubbub of the city, this would have been great. Hundreds of acres of quietude. A big lake surrounded by croaking bullfrogs (served with braised duck blood and celery) and cicadas, a veritable fountain of white noise to contrast with the solemnity of the view. That was my experience in the Hotel Bubble. Completely and absolutely free of anything Chinese. Having boarded one of the special media buses in the morning (security check done AT the hotel) you could then spend the rest of your day in the Olympic bubble, free not only from the annoyances of constant security checks, but – again - of anything Chinese, as well. So there we were, floating inside the bubble, though perhaps the biggest joy of this past week was the walk from the Watercube to the Bird’s Nest stadium, where for the first time, you were surrounded by thousands of Chinese who were totally caught up in the community of the moment. Perhaps I was wrong; was “this” the “New China?” Thousands of families with children in tow (rarely more than 1) racing in and out of the water park, taking literally millions of pictures of each other. 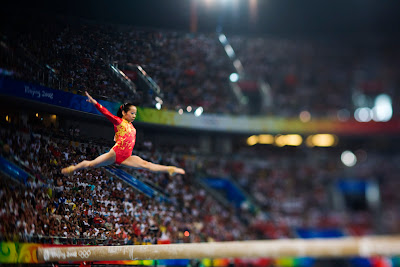 Another thing I am incapable of doing
As you walked through this enormous public place, you ended up posing involuntarily with thousands of family scrapbook pictures. Everyone has a camera or a fone. If only a fone, they are not put off by the lesser quality of their fonecam – they are of the new century, and embrace the fact that they can send a picture with that fone. In many ways you would be hard pressed to have found a more modern scene like this anywhere in the world. This, is the new China. The aunties and uncles, yes they remember the Cultural Revolution, they remember the end of the Mao era, they remember the overtures of Deng Xiao Peng in the 70s and 80s. And now, standing with their point n shoot cameras at the ready, they are here to remember the arrival of China in its grown up state. Like any entrenched bureaucracy (the Politburo remains committed to its own survival, above all) going forward there will be ongoing questions of human rights, free speech, and repressive governmental measures. But it is impossible to dismiss what the Chinese have done here. One of the projects I could never find time for (and now, in retrospect is it more or less important than a handball game?) was to wander the Olympic Green area (the giant fenced in Maze which contained numerous stadia, media centers, and sponsor tents.. several square miles) an d photograph the green uniformed police who stood perched at nearly every corner under red umbrellas. They were ubiquitous. They had a way of swinging their extended arms right or left, a gesture which meant “don’t stop here, you need to go at least another 600 meters.. maybe even more to do what you want to do…” The one bromide repeated about China non stop is that ‘they have the bodies to make things work…’ and indeed there is always a ready army of people to throw at a problem, it seems. 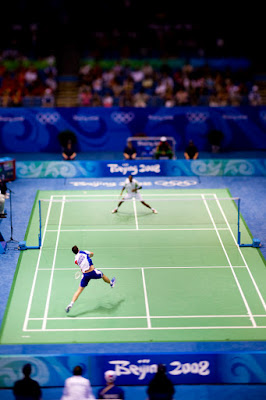 Badminton: a new favorite sport
But the level of competence was rather high, and in the more public situations – Opening Ceremonies, Medal Ceremonies, there was a crispness and professional quality to the spectacle which made me wonder if this could have been pulled off anywhere else. Even the teams of white suited flag bearers at the Medal Ceremonies – obviously well trained military—had a way of goose stepping, and unfurling a flag that I have never seen anywhere else. There was a crisp theatrical quality to it which turned heads every time.

As the Chinese have ascended, it might be worth noting that the US had a somewhat disappointing production of medals.. It is always difficult to maintain high standards, to train athletes to be the best in the world -- and this year was no exception. The loss of both 4x100 meter teams (dropped batons), the 100m sprints, the baseball and softball teams, and other traditionally strong American endeavors was perhaps to be expected as the rest of the world emerges (does Jamaica come to mind) with quality training programs. I can’t mimic the sound, but I can tell you that in nearly every venue, the old chants of “USA, USA…” which used to annoy me (Did you see pesky Soviets, or Russians cheering their teams? No, you just saw them go out and win!) have been replaced by the generic version of “Go China, Go China!” The exceedingly polite crowds, always happy to applaud a good effort by any team, would save their feetstompingwhistleblowingscreaming for the Chinese contestants. 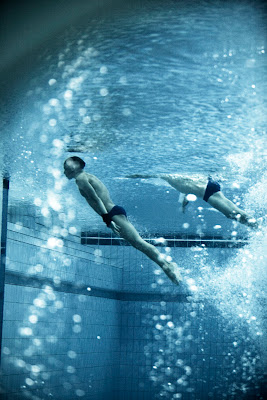 Both softball and baseball are exiting the Olympic stage this year, and it’s doubly ironic than, that these two traditional US powerhouses ended up with Silver Medals. Somehow, the visions I have of kids a generation ago who lived in their local parks playing baseball till they were called home for dinner, has been replaced by the Gameboy addicted youngster of today who only goes to Little League to play the same way he or she goes to any other playdate: with too many adults present carrying clip boards and trying to be in charge. The kids no longer just show up and play because they love it. Baseball has become just another scheduled activity. And scheduled activities are not how Olympic champion teams are made. It all signals to me that going forward the Asian powerhouses (Korea, Japan, and eventually China) and those hungry to succeed kids in the Caribbean, will be providing the grist for the new stars of the Major leagues.

The Brits did well again this year, surprising many with their victories and placing high on the list of the Medal count. The Russians, if taken together with the teams from their former Republics (Ukraine, Latvia, etc. ) would have the same kind of dominance we remember a generation ago.

The point is that in the end, endeavor pays off. Whether it be the kids in those Chinese youth camps which try and discern at an early age which kids have talent, or Michael Phelps’ mom, who understood that making sure her son could practice as long as he needed to in order to reach his potential. There is no substitute for hard work and preparation. I suspect the Chinese have found a new self confidence in these games. That much was evident in the outward displays of support at nearly every venue. It remains a wake up call to the US in particular. Whatever we have felt was our due over the years, can only be held and maintained by a recommitment and dedication to excellence. Our soup bowls will go empty if we think we can cruise on the success of the past. The Olympics are one of those indulgent stories which we cover every couple of years in order to see the implication of sport in the rest of society. 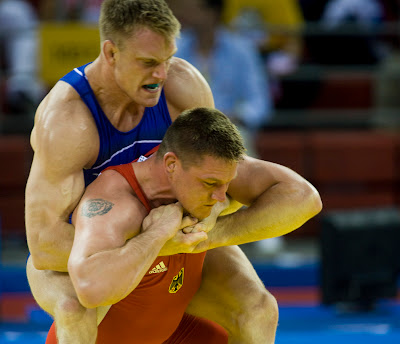 Security Check at the Beijing Airport Departure
Often, a great performance is just the coming together of a string of dedication to training and preparation. Yet, there are trends, and while some may crow that the great TV coverage gained millions for the Universal coffers ( I have no idea how great it was.. what I saw was on the Chinese/Int’l feed to the press center), the Games have to be more than a televised marketing ploy. Can inspiration come from them? Surely. Who wants to be the next Usain Bolt, the next high flying Gold Medal gymnast? Some kid out there in a village, perhaps where they just recently got a television. A kid who runs to school. Who tumbles. Who can climb a tree in mere seconds, and leap down in a double somersault. That’s the kid who I hope to be able to see in Chicago in 2016, maybe not as a subject for my photography (do 70 year olds still take great pictures, why yes they do!) but as someone who showed that in 2008, there is still a chance to be inspired by the greatness of others. We’re just sayin…David
as always, double click on a picture to see it BIG
Posted by Iris&David at 10:01 AM

W whose now raising bantam chickens for the eggs

So true about the future of tomorrow's atheletes fron the US. Wow..some 'security check'..What happened to the good 'ole days of opening cameras and watching secret service point 'n flash a strobe in their face to see if it would explode?

Eeek! Didn't think your r&r was going to be on the flight back.

David, Thanks for the insights and background stories.

And great tilt shift images - those always continue to inspire. It's damn hard to get that sliver spot of manual focus in a fast moving event.

Kevin, you are too , too right. But that is half the fun, and when it works, its really a happy time behind the viewfinder. on the other hand.. when is photography ever truly easy/?