There is something mildly frightening about sitting in a Francisan retreat chamber, masquerading as a conference center hotel, while listening to Chris Magette tell us how the traffic is in the Bronx 'on the 8s' on WCBS radio. We live in that kind of world. While the Chinese government did promise that there would be unfettered internet access, they.. mmm , well, they lied. 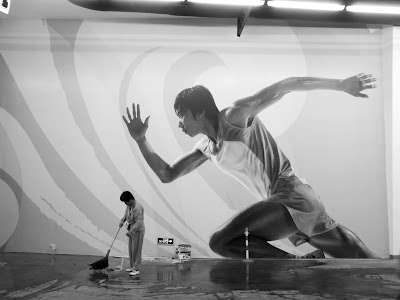 Shocked, I know to hear a government say one thing and do another. But a lot of blogs are blocked (including my colleague Ken Jarecke' “Mostly True” blog, a chatty and fun look at his view of the Olympics) and a number of other informational sites. But, so it goes. I guess they decided not to cancel the games two weeks ago over the internet issue, but there should be some kind response which lets the government know they should live up to their commitment. 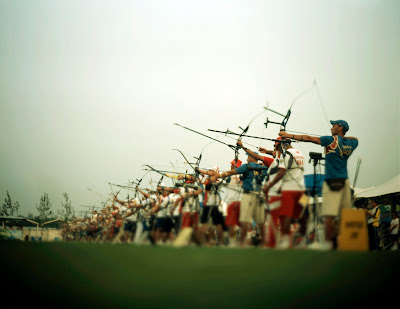 Nonetheless the logistical (i.e. do the trains run on time?) job which the Chinese have done is quite amazing. A particularly noteworthy feat in the middle of an alien invasion of hundreds of thousands. Having either learned from previous Olympics or decided they would merely use their own expertise, they have created a 'bubble' much larger than any previously seen, and made it positively easy to stay within it. A 'bubble' for those of you unused to the idiocies of the Security Industry (and I mean that in the nicest possible way), is the area which is considered “clean” and “safe.” Clean in terms of the chance of bombs and other guns and explosives, and Safe in terms of once Inside the Bubble, you are considered NOT to be a threat. Photographers are the worst for those Security people: we carry bulky, heavy items, which you have to be a professional to really understand, and if you look at how we dress, well, wouldn't you be suspicious too? I look at the picture of me in those shorts in the bus station, and wonder, who was allowed to design shorts which look like that? Is that person available for grilling? I like the big pockets, the cargo pockets, the weight.. very light.. but there is something goofy about the length to which those shorts go. It is, I guess, part of the dumbing down of the way we all look, but it is so tedious to see mountains of ice loosen up and let go off the Carolina/Jersey coast. That last sentence will give you a real idea of what we 're going through. Remember, I'm not a whiner, but trying to write a blob at 2 or 3 in the morning takes its toll. You end up-- your mind just starts to shut down, like when your Battery Level starts flashing on a Canon camera. It may still be operative, but you cannot be sure the brains inside will actually do the right things. It doesn't take a genius to realize that "so tedious to see mountains of ice loosen up and go off the Carolina/Jersey coast" has Nothing, I repeat, Nothing to do with ugly shorts. But when you have been up for 20 hours this is how your brain works. If I had a black metal pan and a pair of eggs, I could show you what your brain looks like Not at the Olympics, (perfectly fried, maybe even basted).. and what they look like At the Olympics (really bad scrambled eggs, the kind they have for free at Hampton Inn breakfasts when the do the eggs at 4am on the first shift, and expect you to think "free breakfast" is a great step forward in the humanity wagon train. 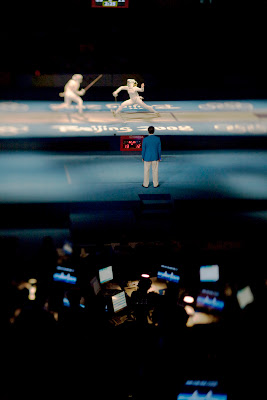 the fencing bubble
I have kept feeling that I have yet to actually land in China. Yea, I made it to the airport, and yes, there are dozens, hundreds of very hospitable Chinese dressed in volunteer blue outfits, helpful at every turn. But interfacing with the real China outside the bubble? It takes real effort. I finally went with crack assistant/guide Eric (a 23 year old American who came to Beijing a year ago to study, take pictures, and live in a new place.. Bravo! I say) took me to a great little restaurant where everything but the beer had red peppers sliced into it. It's not the Chinese food we know from Marks in VA or even at the Barbeque King in Sydney (our 2000 hangout). The dishes tend to include more versions of Braised Goose Blood, for example, than you will find at Sun Luck in Manhattan. It's very 'popular' -- of the people, and the skittishness of the Chinese to eat damn near every part of every animal creates some challenging moments for the western palate. 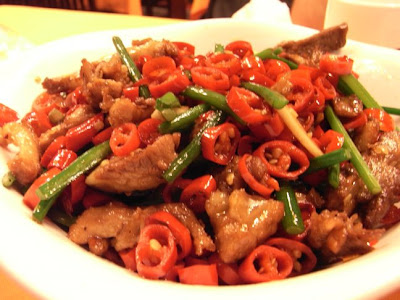 The best part, though was just having the chance to be out of the bubble, and be the only alien in a world alien to me. I have always enjoyed the adventure of travel, and the excitement of new cuisines. But to do so, you need to escape the bubble. and when the bubble becomes so convenient that you resist the desire to set foot beyond you risk ending up having a non travelling trip. In the end, you could say the Chinese goverment is complicit with making it so easy for us, that we won't challenge what they don't want seen. But I have to say, having received a $500 parking ticket from Arlington Country, Virginia last year for accidently parking in a not well marked Handicap space, I become further convinced that all governments act like all bureaucracies for whom the first rule is: guarantee the survival of the bureaucratic entity. They all put themselves above the people they are supposed to govern. So when I see a 'bubble' like the one in Beijing now, I kind of understand that its their freaky way of trying to keep everything under control, and go with their strong suits, and de-emphasize the negatives (which Chinese society has plenty of, like all of us.) Hadnt meant for this to become a political yap ground, as we continue to be in the midst of the politics of the Games themselves (i.e. 'underage' Chinese gymnasts?, etc.) There was a moment yesterday, while leaving the big birdnest stadium (we were looking at shooting positions ahead of time for once) that I turned a corner on the way out. There, a giant poster was on the giant wall of Liu Xiang, the Chinese champion hurdler. It must have been 20' tall. Just below, with a broom in hand, was a woman cleaning up a small patch of driveway. He is the champion. And she is doing her part. Her little broom, in her hands at that moment was nearly as important. Of course, no one will acknowledge it, except maybe the few people who see my photograph. It was a wonderful little moment. And then to cap it off, some jerk, a Yank I think, came roaring by in a stretch golf cart, made the turn and said "geez, guys are you desperate?" The guy clearly has no visual sense, and is probably one of those people never far from his Blackberry, getting worthless messages on a constant basis which remind him of how important he is. Desperate? I suppose he's the desperate one. I actually saw something. I noticed. He whined. Watchers 1. Whiners Nil (overtime) We're just sayin...David
Posted by Iris&David at 3:29 AM

I can only imagine what would happen if you were allowed to watch all the time... Nice pic.

Pay no attention to the man behind the curtain. The great OZ has spoken.

1.1 billion Chinese do NOT care about the length of your shorts.

W outside the bubble

Watchers are winners, not whiners.

The Chinese say the mighty tree must sway with the wind..Not sure what they say about shorts..

Man, when I first read the metaphor of the shorts and the ice off the coast of carolina, I thought I had stayed up too long and wasn't getting it. Thanks for clearing it up.
Nice photos, too.

Since the IOC likes to work in what they call "quiet diplomacy," I think their response will be that China won't host another Olympics for a long time.

Davie,
I believe the Buddha would agree that the post-3 AM mind stop is a state for which to strive. Stay awake and continue to note the sense of wind in your shorts and ladies with little brooms.
Love, Pammie