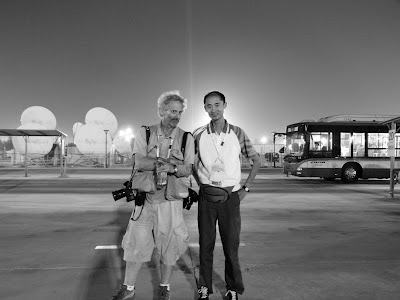 Midnight at the Transport hub: the MA05 Driver and me
Amongst the most capitvating things you see in Beijing this week are what seem to be a wholly new attitude in how the Chinese see the world.Admittedly, the people directly involved in the Games are not exactly your average man'woman in the street, but as the Chinese middle class grows into the hundreds of millions, the demographics change with them. Hundreds of Red Flag decals adorn the cheeks and shoulders of people both in the sporting venues, and the streets outside. There is a definate festive atmosphere, though Im sure if you are a member of Falun Gong or a severe critic of the regime's Human Rights policy you would hardly agree. Yet, beyond the grand and many faults which the country counts on its debit list, there are some surprizing elements of change, none of which would have been obvious 8 or 10 years ago, my last time here. On a 1999 trip with Intel Corporation's Andy Grove, there was concern about the tech bubble, and more amazingly, about the implications of Y2K. For those of you with short memories, Y2K was the assumed trouble which would ensue 12/31/1999 when none of the inplace mainframe computers would be able to make the leap of faith to the year 2000. We did stumble through without any major problems, but it has always served for me, as a cautionary tale. On that trip, to Shanghai and Beijing the main purpose of which was to make the face of Intel a little more user (and investor ) friendly, we felt still as if we were in the end of20the immediate post Mao era. He'd only been dead twenty years or so, and much of the governemtal and social structures had changed but a little in that time. Gray was still the overriding color not only of the air, but of much of the mood. Legions of bicycles still plied the streets, far outnumbering automobiles. The bike lanes were bigger than those for cars; that has evaporated since, cars remain not only a symbol of prestige, but the key to private motoring (i.e. go when YOU want, where YOU want) though the numbers and their presence in large, often snail's crawl pace masses, reminds you there really is a reason Petrol prices have sky rocketed. I dare say, in my little mini adventures, too few, out of the bubble, I have seen that the city has evolved in ways I wouldn't have imagined. That said, even if you only stayed IN the bubble you could find some interesting surprizes. First and foremost, as a journo, we are surrounded by a large and generally speaking, very competant group of young volunteers. They speak varying degrees of English and other tongues, and there is often a mentality a little too geared to enforce rules rather than help smooth things out. But nonetheless, it is astonishing to see these thousands of kids and their dedication to making it all work.

At every Games there is a simple yet key piece of paper that we work on getting in hand at the outset. It quotes from a rule in the IOC handbook which states that a Photographer may sit in any unoccupied Spectator seat so long as he/she does not impede the view of those around them. It means, in short, that you can shoot from anywhere there is a space and often it is those 'alternative' positions which give you the best shot. However, I have never attended an Olympics where that little catch was made clear to the enforcers, and at each Games, each venue you have to do a little educating. The great thing here is that once you showed them the piece of paper, then you were no longer just a photog to be tolerated, you became, officially, a sanctiioned and groovy person whose aid and comfort was then foremost. At swimming, I spent two hours at the underwater window in the company of a young volunteer named Zhu Tian Qian. She was unfailingly helpful, constantly watching to make sure the leaky water (38472939 gallons, ready to burst through a seam at any minute, engulfing photographer and escort) didn't get to the cameras, and my leaky shoes. Conversation was limited but her unfailing warm smile seemed to mirror that of her colleagues for most of the games. Maybe I have been drinking the Kool Aid, but I have to say these kids are great, and when you needed a hand (recharging your mobile fone... buy card, scratch off numbers, call mobile automated central, click 1 for recharge, then dial your new credit into fone.. but in Mandarin? nope.. not me!) they were always there to lend a hand. And only rarely did they outright laugh at me.

BMX biking a new sport (trying to emulate the X Games?..a 70 picture mosaic: proof that more & bigger is NOT always better..
To wander between the Watercube and the Bird's Nest last night, as I did, and see the thousands of milling, excited throngs of Chinese was to see the tip of a new country emerging from and often difficult past. Everyone had a digital camera, and people were taking pictures as fast as they could line up a viewfinder. Wet kids ran in the water park (we saw this for the first time in Atlanta in 1996, but the execution has become much more fun, much more sophisticated), chased by wet parents, who bore smiles of discovery. These folks were not going inside to see Usain Bolt blast through 200 meters. They were more than content to just wander through the Olympic Green space, and enjoy the sites. There was a reflection of joy on their faces which, in my description, probably sounds like a press release from the Olympic Organizing Committee. But I can only tell you what I saw. Compared with China in the 70s, this was a different place, altogether. Read a fascinating memoir - Powerful People - by former Life/Fortune reporter Roy Rowan, whose detailed and insightful descriptions of China in civil war after World War II are startlingly fresh and compelling. Roy was a young writer, just out of the Army and spent several years bouncing around as a front line reporter for TIME, in the company of one war lord after another. If you want to see how far China has really come, read Power People and what you see today will seem like a fairy tale. Last night I saw no war lords, except perhaps for the humma hummas from the Olympic Committee. But, make no mistake about it, there will be nothing but going forward from this point in time. The Chinese have seemed to put the 1988-89 events of Tienamen behind them. They have their challenges: energy, environmental standards, what will constitute true freedom (don't we all have that issue these days? I'd say so..) for the populace. But as limited as what one sees around the Olympic zone might be, I only wonder what will happen if the enthusiasm and energy of her people let this country start to hit its stride. It will be a most interesting ride for all of us. They've had the Coming Out Party. Now it's time to see what happens tomorrow, when Real Life sets back in. We're Just Sayin'... David
Posted by Iris&David at 9:42 PM

Hi! Hope you're enjoying yourself these days ! I am one of the photo volunteers.Can you guess who i am?

David,
If you are amazed at Bejing, imagine how much it has changed since I first saw it in '72. In those days, the streets were clogged with bikes, horse carts, motorcycles and busses. There were anti-U.S. slogans and Mao pins galore. You must search for the 'old Beijing.'

Note: As confident as we find the folks here today, they are apparently not overly confident. They have placed a piece of tape over the American Standard label on the urinals and commodes throughout the Main Press Center. STRANGE.

How do you spell funny, baggy pants in Chinese? We love you anyway. Hope to see you at Mark's soon. M.

Who is that guy? What did he do with David Burnett?