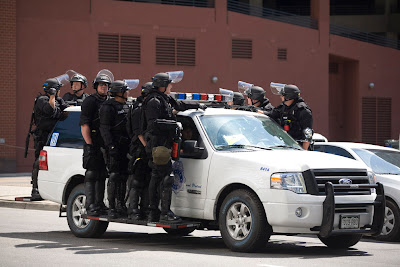 “Stand in back of the white line”. He didn’t say it in a nice or courteous way, it was an order and we were surprised because there was no reason why he couldn’t have been polite. We were on line waiting to get into the Pepsi Center in Denver. The convention had not started, there were no VIP’s in the area, and there was no visible threat—except the Denver Police swat teams riding around on tanks.

David just got back from the Olympics and he said he was embarrassed about the Denver “police state” mentality. He said he would have not been surprised if it happened in China—which it did not. In fact, when they took his watch, cameras and other metals that might set off the security machine, they placed all his belongings on a red velvet tray. Pretty nice huh. Such is not the case in this beautiful, peaceful city. 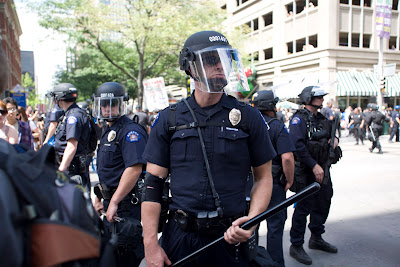 Patrolling the dangers of 16th St., downtown
My cousin Miki, who was with us while we proceeded slowly, very slowly, through the line, insisted the security personnel were not from Denver. Maybe they’re not but they are taking orders from someone and it ultimately reflects on the city, (Don’t tell Miki but I think they were from Denver and probably had just gotten off the tanks). Anyway, there was lots of “walk over there, you can’t walk over there, you need a star on your credential to walk over there.” It does not bode well for the rest of the week. Let’s hope yesterday was just a practice and instead of Swat teams with machine guns we will see some buses transporting delegates.

The good news is that it’s much easier to get into the Convention Center—which is not the actual convention center – that’s the Pepsi Center. (Isn’t it wonderful that every building is named after a product. And for a mere $4 you can buy a Pepsi or a Diet Pepsi or any Pepsi product. The Secret Service Agent who was most reasonable about letting the young women who were with the Lifetime TV group stand in the shade instead of the sun, told me that security was tight because of the information they had about threats. The bad news is that the police remain in overkill. For example, we walked past a protest 15 blocks away from the Convention where there were no less than eighty five police in riot gear and no more than 5 protestors, yelling at one another. One of the protestors carried a sign that said “Homo sex is a sin”. This clearly threw the police for a loop because they, like me, probably didn’t know what a homo was.

On another note, David came home from China sick as a moose—dogs don’t always have to take the heat. Our wonderful doctor called in a prescription, and while we waited we sat outside a Starbucks that happened to be around the corner from the Credentials Center. It’s the place to sit if you want to see everyone you have ever known in your entire political life. Of course it is. Everyone has to get a credential. It was such fun catching up with the people I wrote about last week—the people you see (at the most), only every four years, and often for many more. You see young adults who were babies when you met and grown ups with children who were still in college when they worked with you on their first campaign. You exchange gossip, information about politics and of course, what parties you think are a must on the list.

This ongoing four day reunion is the only reason to be in the middle of such chaos. Sure there are some interesting politics, like someone is spreading rumors about Hillary giving up her delegates, and Hillary people protesting in the street. The Hillary people think the Obama confidantes are spreading them. The Obama people deny that they are involved. And that’s probably true. So who do we think would benefit from rumors of divisiveness? Maybe the Republicans? Rumors, gossip and misinformation are unfortunate realities in Karl Rove run campaigns. And the media are so easy they will write or broadcast anything they think might be controversial. I wonder what the Democrats will do next week? I truly hope it’s entertaining. We’re just sayin... Iris 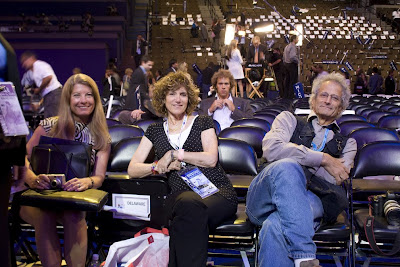 With Kate Shaffer, on the floor of the Pepsi Center, Monday night
Posted by Iris&David at 8:44 AM

So nice to see a photo with both of you side by side.

I am confused 'cause David doesn't have antlers in this picture, instead looks rather chipper. Especially after three weeks as the key ingredient of Bird's Nest Soup and a long plane ride to Denver. Whoever that "call in doctor" is, I want his or her name for that prescription.

Me, today was the first day of class. it's so nice to have 15 bright young people in front of me instead of tripping over Network correspondences.

I'd heard horror tales of credentialled correspondents being detained, and otherwise 'held up' when trying to get in...


Perhaps I listen to way too much overnight talk radio www.coasttocoastam.com but seems there may be something to this police state thing after all,judging from your report.

If they're going to be that way to 'the good guys', imagine what's in store for the trouble-makers!

Be safe out there.