At political conventions there are always people who have short term power because they get to make decisions about access. There is nothing more important in politics than access to some venue or a person. It’s how lobbyists make their living and how political staff people keep their candidates in the dark. But that’s another blob. Anyway, some of these people issue credentials, some (in the name of security) decide if your credential matches an area where you may want to sit or pass through and some are assigned to the ‘door’ outside at VIP clubs in the hall or outside at parties celebrating some person or organization. There are those people (usually volunteers) who use good judgment in their decision making and those who wouldn’t know a decision from an incision and isn’t it good that they are not doctors.

Yesterday I had two experiences that were perfect examples of good and bad political judgment. They were so distinctly different (and kind of inside politics) that I thought I would share them. 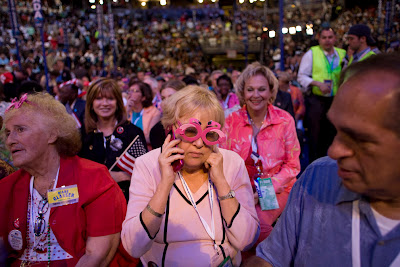 The Florida Delegation (Floor)
At the Pepsi Center, once you get through the overkill yet inadequately prepared security checkpoints, you are credentialed for different areas. The most important area is Podium. This credential allows you to actually get up on the podium and if you should so choose, wave to the crowd. You can’t do it when there is an important speaker but you can visit when some lesser VIP is blabbing about life, liberty, and their pursuit of some payoff. The next level is Backstage. This means you can be behind the podium (usually some team dressing area, but you can’t leap on to the stage.) The third level is a Floor pass. The floor is right in front of the podium and once you get there you can’t move. But it’s an important credential so you want everyone in the hall to see that you have it. From there, the delineations are guest passes, honored guest passes, press passes, camera platform and a whole range of other identifications. The important thing is the color of the pass – because again, that permits access to different areas. 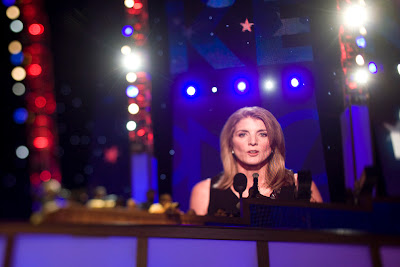 Caroline Kennedy introduces Teddy (Podium)
Along with these credentials, there are tickets which get you into VIP areas where there is usually some kind of food, and the wine flows. Some of these suites have a view of the hall and some just have TV’s. The beauty of these suites is that you don’t have to mingle with the ordinary run of the mill delegate or guest. Which brings us to the point of my blob. 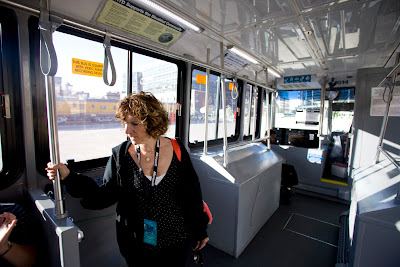 Iris on the "delegate bus"
I had a ticket for one of these areas and a very dear friend did not. So when we got to the door the person who was authorized to make the decision about who could come and go was fine with me, but not with him. We explained that we were old friends and wanted to spend some time together and after just a few minutes, she said, “sure come on in.” She used good reasonable judgment. 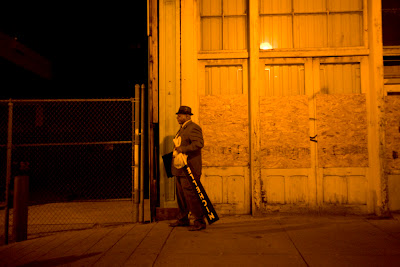 Much later in the evening, we decided to hit the party circuit and after a few rather disappointing efforts we went to the Mayor’s party. Another friend said to ask for his son because he was some humma in the Mayor’s office. Actually, we went because David wanted to tell the Mayor how screwed up everything was in Fort Denver. When we got to the door there were two young women who investigated the list of attendees and found we weren’t there. “Yes I know”, I told her but call Nathaniel and he’ll say it’s OK to let us in. Well, they couldn’t do that, but they called Bree. Another woman then appeared and announced that Bree was not to be called—but Bree showed up and they all chatted about when to call Bree, if they should call Bree, and like that. Finally, I interrupted and introduced myself and again said that they should call Nathaniel because we wanted to say hello. She refused to do this (she probably didn’t have access to Nathaniel) and began to lecture me on the rules of going to a party. Her lecture was nasty but not particularly interesting and it was so late that everyone was leaving and they were no longer serving, so we left. That was bad judgment. First, because I was going to tell Nathaniel—not only that she wouldn’t let us in but that she was nasty. And second, because the party was pretty much over and it was a no brainer. We would have said our hellos and goodbyes within minutes of one another. At some point she will say a foolish “no” to someone who cares or can impact on her career or life, and then she will understand about reasoned judgment. 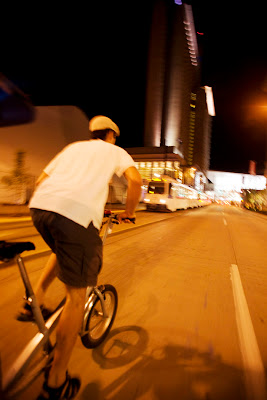 By the way, last night the security people first tied the delegate buses up for hours and then, after the convention, stopped the buses from running. We opted for a bicycle rickshaw with a most entertaining and reasonable driver – who despite many requests had the good judgment to select us as his passengers. We’re just sayin...Iris

as always, double click a picture to see full size
Posted by Iris&David at 7:20 PM

There are always people named Bree in the wrong place. There was a kid working for me in the VIP seating area in '80 @ Madison Square Garden. He was very close to turning US Senator Bill Bradley away when I intervened with a polite, "welcome back to the Garden, Senator." The kid didn't even recognize the Senator from a neighboring state! Never mind one of the all-time great basketball players! You two are nuts to submit to this nonsense again. But, hey, that's why we love you.

See if you asked me I would have told you bicycles are the only way to go a long time ago.

A bicycle got me all over Cape Cod last week.

With a bicycle there is no need for Olympic or Convention Bubbles. It's just the tires and you taking any path you'd like. You are the gate keeper; your ticket can be whatever color you want.

W for I'm not going there

PR. "P" is not for "public" or "press" and "R" is not for "relations". They are against press and having a real human relation. The kind of people who run the lists at the doors seem to have given up all reasons to think and to make sound judgment. They are there to serve their client. What is worse is that sometimes I have had to suck up to these people to get in somewhere! I hate PR.

Cruising at Warp 6, now passing outer edges of the Milky Way.
'Fortunately' beyond tv reception and unable to catch the DNC. Cable lines laid only to Jupiter, shocker!

Made stops at Uranus, Neptune and Pluto. Picked up Rosy, Edwards, Sharpton, Carville, Jessie and Gore... Hence the phrase:
"My God, what planet are you from"?

Rosy and Elvis having grand time lipsynking "a hunk a hunk of burning love" - Gore and Sharpton waste the entire day staring at all the colored buttons like zombies, most irritating!

I promise to have them all back to y'all by Friday, just in time for the RNC. Got a feeling you'll be needing 'em before this is all over.

And if I were Ms Glasser, I'd move as far as possible from that psycho looking lady with the pink flamingo glasses. Any bets on who she's talking to?

I think this woman starred with Jack Nicholson in "The Shining"? No wonder security is so tight at these things.....

you forgot to mention the rotating floor passes... that allow press to go in for 25 minutes... which is impossible since it takes 25 minutes just to get there and back. im so eager to get in there, that I snuck in today with my lowly "arena" pass. i managed to stay under the radar and get some good photos... I feel bad about sneaking in, but not too bad... they make it so hard for people just dying to take pictures!

a bookkeeping note.
you may not be aware, but the greatest number of posts in a month was 26, way back in may 06. currently, you're a bit behind pace to surpass that long standing personal best. maybe, just maybe, you can say more & blob your way to a new blobber record... i'm just commenting

I'm waiting to read what you have to say about McCain's VP pick. I'm still in a state of shock.