To wrap up the highlights of the week I thought I would start with the bad news and move to the good. You may have read about the ABC producer who was arrested because, when the police asked him to move, he didn’t move quickly enough. Denver, or 'Fort Denver' as we came to call it, did a pretty good imitation of what it would be like to live in a police state. If Martin Luther King had been in Denver in 1968, he would never have given the “I have a dream” speech. But almost as bad as the security was the incompetence of the “volunteer effort”—notice I say the effort, not the actual people. They had no information about anything. No one knew what was supposed to happen with regard to anything—from transportation to credentials to security. This creates a situation where everyone says “no” or “I don’t know” to any questions for which you might need an answer. At the end of the convention there were 75,000 people looking for a way to leave the stadium and what they found was chaos. The buses couldn’t move, the traffic was at a dead stop, and the security continued to be excessive. But let’s move on... please. 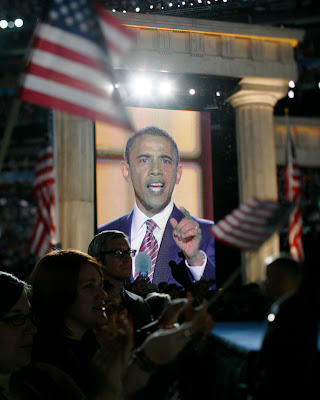 People who were waiting for Bill Clinton to be mediocre on Wednesday night had to be disappointed. He was brilliant. He said everything he needed to say about the Obama candidacy and what he needed to say about McCain. It was a speech that, combined with what Obama said, should be used as a model for the rest of the campaign. And on the subject of speeches. All the speakers were good, if not great – except Mark Warner who is usually extraordinary and lacked a little luster. But Durbin was wonderful, as was Kerry, Richardson, Gore, and of course Barack Obama.

Let’s talk about the night – which was extraordinary. We left for the stadium at about 2pm because everyone said they were going to close the doors at 5 and it would take hours to get through security, I don’t do well in lines, so we cut around the crowd and it took no time to find seats. And there we were sitting in seats within the Club area. But they were still football stadium seats – not good for the tush. We were there for about three hours when I realized that, because we were not on the field, it was easier to watch the giant TV monitors than it was to see the stage. From our seats, which were right across from the podium, the people were just a little too itty bitty. And I realized that I wanted to be in a place that was a bit more intimate with people who were not predictable. Just a note—the 75,000 people at the stadium did not appear to be your usual Democrats – they were conservative, liberal, old, young, different colors and sizes. 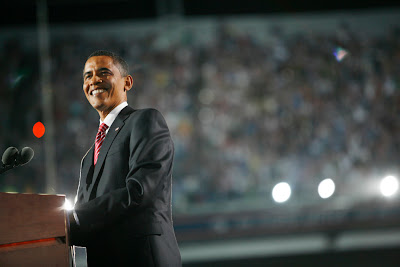 Anyway, we left. It was not easy because again, no one knew how we were supposed to do that—there were no provisions for leaving before the speech ended—and as it happened none for afterward either. We wandered into the parking area where we were directed by at least three people to find a bus. There were hundreds of buses but none going into Denver. And the distance to the entrance, in order to exit, was a mile. So I commandeered a golf cart and the single only person to say “Yes, I can” outside of the hall, drove us to the light rail, which was luckily still running. When we got back to Denver (a whole two miles away) we found a small, trendy, almost empty bar, where there was a very nice Republican bartender, who was going to vote for Obama. When Al Gore spoke, there were a few more people, and by the time Durbin introduced the video, the bar was packed inside -- and outside people had gathered on the street to watch through the windows. When Obama walked out on the stage, the bartenders turned the TV volume up as high as possible, and they stopped serving. It was like nothing I had ever seen. The bar crowd participated just like they did at the stadium only on a smaller scale. There was cheering and yelling and many tears. There was the kind of excitement I haven’t seen for too many years. The Obama speech was thrilling. It wasn’t just a laundry list of what he was going to do. He painted a picture of the future he wanted to see for all Americans. And most of all he put McCain on notice about what kind of campaign he was going to run. He said would not tolerate any accusations of a lack of patriotism or experience. He said this election was about judgment, vision and a positive change in attitude. Then, when the speech was over they turned down the volume, turned up the music, and started to serve drinks. 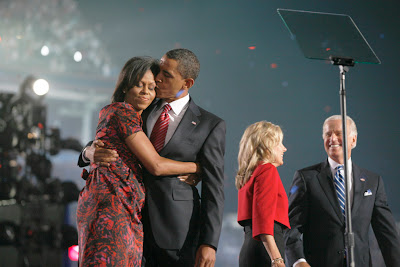 The decision we made not to be a part of history (at the stadium) was difficult, (emotionally and physically) but we did give our credentials to some young people who would never have had the opportunity to be a part of what happened at that stadium. I guess we passed the torch and it felt terrific. We’re just sayin...Iris

as always, double click on an image to see full size
Posted by Iris&David at 1:13 PM

Did you see someone dressed up as Abe Lincoln talking to people about DC voting rights? That's my friend Eli.
http://voices.washingtonpost.com/dc/2008/08/dc_votes_eli_zigas_is_ready_an.html

As your partner in crime Thursday, I wouldn't have done it any other way. Passing the torch to a new generation -- sound familiar?

Love you both. See you soon.