The YANKEEs Win!! And So Do I

When you spend much of a summer in New York, there are a couple of things you have to do. Visit Sammy’s Roumanian Restaurant on the Lower East Side, and watch the strips of skirt steak fall over the ends of your plate while you listen to Yiddish music. Take a stroll through Bryant Park at just about any time of day or night, and enjoy the “oasis” quality of the place. Hundreds of people hanging out – it’s very European, really – many with laptops at work (the whole park is a free wi-fi zone, something which should be more prevalent in other parts of the city, as well as other cities across the country) or just lazing over a Latte from the cafe joint on the corner. Nothing is rushed in Bryant park. Families, loners, lovers, they are all there, and everyone is on Chill Mode. It’s a very pleasant break in what can be a difficult city to maneuver in.

Among my short list, too, would be attending a baseball game. I still haven’t had the chance to see the Brooklyn Cyclones play on Coney Island. Essentially, I’m much more of a fan of minor league ball. I enjoy the small qualities, the lack of overdone marketing and hype, and i still believe there is something fresh in players not yet making millions pursuing a dream to play ball. Most in the minors will never make it in the Bigs.... so the essential joy is to be found in the game itself, not in the swirl of big money which surrounds it on the highest level. That said, there is something profound about attending a game at Yankee Stadium. Yesterday, thanks to Chris Murray, the colorful and energetic proprietor of the Govinda Gallery in Washington DC, I had a chance to see the Yanks host the Mariners. Chris’ brother has, through one of those great stories of inheritance, come to ‘own’ four terrific seats on the fourth row behind the Yankee dugout. (It’s a great provenance, a tycoon, his nephew, his niece, a marriage.... as Cindy Adams would say.. Only in New York, Kids, Only in New York.) I was supposed to meet Chris this week and talk about our Bob Marley book project (circle next fall on your calendars), and during our chat to find a time, he realized that he had not yet found a fourth for last nights game. He nominated me, and I, without seeking my party’s approval or run in a Primary election, accepted. We drove north about 6 o’clock (no traffic!) and were inside the stadium by 6:15. The glow of skylight over the outfield was that rich blue that Maxfield Parrish used in his GE Mazda lighting ads of the 30s. It was THE kind of look, the moment when you say, “I’m very glad I came tonight!” Entering Yankee Stadium is rather like many of the great halls of this country. I still feel a slight chill of excitment when I enter the White House grounds, or the Capitol building. To know that John Quincy Adams, Teddy Roosevelt, Woodrow Wilson strode in the same place, touched the same bannisters on the stair wells, gives one a personal sense of history, and our own place in it. (Do I think the President in 2020 will walk along the press room saying “Wow, Dave Burnett leaned his monopod up against the railing!” – uh, No, I don’t) But as someone who still cannot resist a tear when I listen to the Bobby Thomson home run recounted by Russ Hodges in 1951, I do feel it a special place when I get inside Yankee Stadium, knowing that it was the House that Ruth built.

Last night was a perfect night for baseball. My $9 beer lasted me 8 innings. Sip? Did someone say sip? The crowd was lively and excited when it needed to be. After a Seattle run in the 2nd, the Yankees responded with two runs, and led most of the game. In the 7th inning, it was one of those amazing innings you can’t really believe you’re watching. 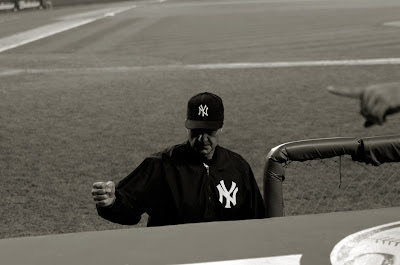 
The Yankees batted around the order, scoring 8 more runs, including two home runs (in the same inning!) by Alex Rodriguez. I remember wondering about his multimillion dollar contract when he came to the Yankees a few years ago. After the National Anthem, the hats go back on: brims in front

But everytime I have seen him play in person (which, admittedly doesnt include his 0 for 21 playoff performance last year) he is the consummate ball player. Hits, runs, fields, hits with power, and seems every bit a team leader. I hate those big salaries, but at least the guy is delivering without bitching about it. The Fans: If you build it, they will come

I was at a Yankee/Mets game in July this year, shooting for New York Magazine, a day game where I arrived at 8 am, and left at 7 that night. 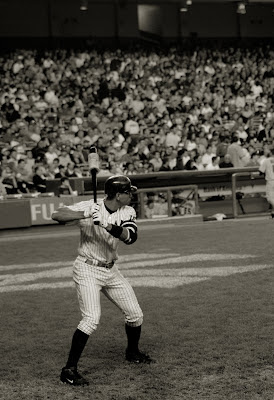 For the first few hours, I was just about the only person there, trying to get a few pictures which would have a sense of the soul of the Stadium (next year it will be torn down, and a new Yankee Stadium, nearing completion just next door, will be the new venue for the team) as it ends its long run. 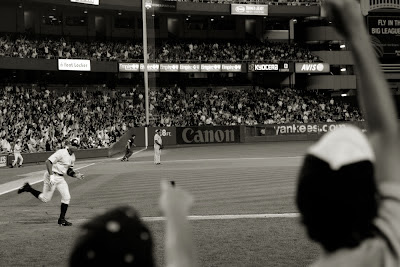 Badda Bing (he swings, it's up and outta here..) 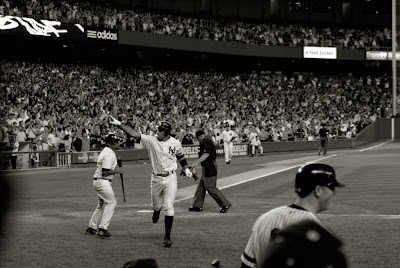 Badda Boom (two in one inning!)


At last night’s evening game, the most astonishing thing to me was the number of cameras present. It seems every other person is shooting pictures with either a point/shoot camera, or a cell fone cam. It’s amazing. No wonder my business is changing. Sooner or later, these people will get that picture which those of us who see it as our life’s work will either miss or just have a bad angle on. Ubiquitous is the word for it. Everywhere. They’re everywhere. Such is the new world we live in, where the camera is now a tool of the masses, and carried by the masses in all places, at all times. Even if it isn’t a Leica or Nikon, a Nokia or LG is the next best (or worst) thing. 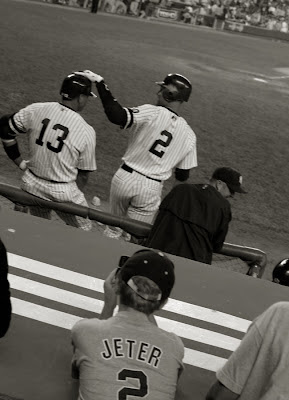 A tip on the cap from Jeter to A-Rod

Watching the fans is always a full time job in itself. The style of dress (Wall Streeters with their fancy suits, college kids in blousy shorts with tatooes abounding, kids in Jeter shirts) is as varied as the seats they fill. But as we pulled a Ted Burnett (webster dictionary definition: “To leave a baseball game in Salt Lake City in the 50’s at the beginning of the 8th inning, no matter how close the game, no matter who is playing, in order to beat some of the departure traffic out of the garage.”) and slinked back into the city, a little piece of me stayed there in section 33, row 4, seat 6. And in looking at the simpatico quality of that night, I’d have to agree with Yankees announcer John Sterling, who would end up saying “...the Yankees win... the New York YANKKKEEEESSSSS WIN...” We’re just sayin.... David
Posted by Iris&David at 10:24 AM

Are you TRYING to piss me off???!!!! The Yankees SUCK and so does this blog entry.
GO SOX AND MORE IMPORTANTLY, GO PATS!!!

Cameras,Yankees,beer? You are a god.

Not "THE" god, lest I blaspheme and be punished, but A god for sure.

Ancient Greeks would worship you.
And probably some younger Greeks too.

In another time you'd have gotten the whole god doohickey honors.

A temple shaped like a Holga. Enter through the lens. Leave slightly distorted.

Maybe even the "Burnett constellation" - a nude herculean figure slaying a Lion with a Speed graphic,or launching a tripod into the night sky using a bow? Perhaps? Perhaps not...Maybe just your likeness holding a couple of goats.

Ancient Mariners would look to you in the night for direction, and tell your mythical story to the novice sailors during a feirce storm - ... "and thus HE saved the goats!!! Oooooh,Aaaaah....

BTW. How'd you get the Aero Ektar to mount on the the 5d?

P.S
I dont know who the hell this Seth guy is (if thats his real name). But it is obvious that he is fixated on certain items of clothing and some girl named Patricia. I hope he seeks professional service(no I dont mean a hooker). Although he does seem a little frustrated. I hear the Yankees team psychologist is really good.

GEEZE is a no-hitter not enough for you!