One of our readers had a terrific idea for the blob. He suggested I/we write about what we’ve learned from blogging. It’s a great question that I’m not sure I can answer. But first I’ll attempt to explain why we started. David used to yell at the TV whenever he thought a network had done a crappy job of covering a story—or he felt there had been a brilliant display of journalistic incompetence. Many people yell at the TV, but unlike most of them, David picked up the phone and called the station to explain why they were idiots. David is a gentle forgiving soul, so this anachronistic behavior always came as a surprise. But as someone who is constantly trying to teach a lesson, I appreciated his candor. 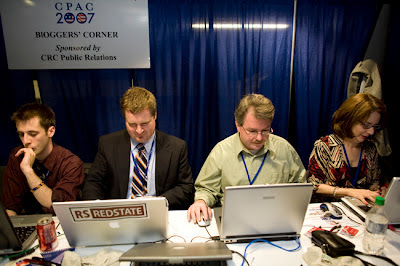 Bloggers (not Blobbers!) at a D.C. CPAC convention: If we ever join them, please steal our laptops!


This will be a choppy little blob but eventually it will build a picture. About a year and a half ago David went to a political event and met the blogger for the campaign. He asked the very young man if he collected quotes or did any research to substantiate that the information that went up on the blog was accurate. Something David felt every journalist should do. The blogger looked at him like he was nuts. “Why would I do that man, I’m a blogger, I just say what I want.” When David came home he said that he was astounded about the power of these political bloggers, who mostly know nothing and speculate about everything. “We could do that and actually be somewhat knowledgeable” he said. I agreed. I knew we could do that and more importantly we actually could have some fun doing it. 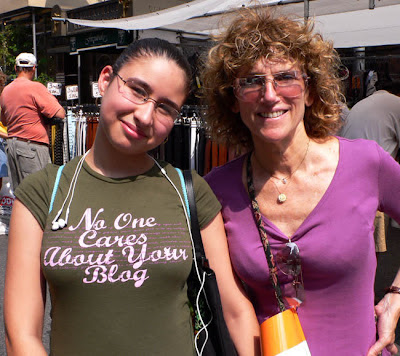 We hope her shirt doesn't tell the real story!

I guess I have mentioned that I have a book coming out in January. For me, continuous writing is not only a discipline but an important part of my day. It’s kind of like exercise. Once you start to do it, you have to keep doing it or you start to suffer from symptoms of withdrawal. My hands start to twitch, my eyes start to roll back in my head and my ability to talk on the telephone is hammered by the fact that all the words I want to use have been left in yesterdays blob. If I don’t write almost everyday I get lazy and find that the rhythm is gone and it’s hard to get it back. Further, I love to see what visuals David comes up with to enhance whatever I have written.

What we have learned is that it can be fun to express on paper what we would ordinarily do verbally – or only to each other. When we talk, or more accurately bitch about something, we say it and it is gone—lost. We now have a record of all the things that were important enough in our lives to write about. For example, we have a list of things that we think can be described as a “sit down and shut up” event. Like people who get on a plane and dilly-dally in the aisle figuring out where to put their belongings and their spouse, when you are waiting to take off. Or, when you are waiting in line in the market, people who ask the checker stupid questions about sales items from the week before. (You get the picture). We used to chat about these things in exasperation. But now we write about them and other people can relate to what we say. People don’t comment so much (save for our few, cherished regulars) on the blob, but those who know us do e-mail or call.

We have learned that, while we can make up stuff, we usually don’t because enough stuff exists that we can write about issues accurately (even though much of it is opinion) without having to enter the world of fantasy theater. We have also learned that there is an audience for what we are doing. It’s not a gigantic audience but we have about 100 people a day who follow what we write. We are flattered and grateful-even though we don’t necessarily comment.

About six months ago, I wrote some things that were an repulsive (I think misunderstood, but perception is reality) to some readers, mostly my family members. I wrote things that I thought were funny and readers thought were terrible. David started to edit my work because I had no judgment about what I thought was funny. So I learned that humor is not universal. But I also learned that if you are going to write about what you honestly feel, then you cannot be swayed by what anyone else says. If I think I’m funny then I shouldn’t have to worry about being not being ‘properly’ appreciated. I’m not yet in that place. It’s OK. The point of our blob was never to hurt feelings but rather to entertain, inform, and maybe even provoke conversation at sit-down brunches. And I think that’s what we do.

The last thing I learned was that it is easy to get attached to people we don’t know. In fact, my son is quite attached to people he doesn’t know but with whom he has ongoing and very funny conversation about the Red Sox and the Yankees. To be honest (blah blah blah), I never thought about the blob as a learning experience. But it I have learned about love, compassion, humor and short sightedness from people we know and don’t know. It’s really been a trip and I want to keep getting my tickets to travel. We’re just sayin...Iris
Posted by Iris&David at 10:37 PM

Iris, Humor IS universal. A GOOD sense of humor is not.

You have inspired me to start my own blob. I'm thinking 2009-10 for the start date. A little late I know, but I am still trying to focus on my Guiness World Record for most banjos made out of ice cream in one hour. Its harder than its sounds.Although Ive found that freezing the strings helps a little.

Here are some other things I have learned from the internet/blogs.

1)A lot of Americans need maps.

2)Never drink and blog.( a message from Mother Against Drunk Blogging)

3)Never put a banana in your gas tank(Okay i never learned this from the internet,but you really should'nt do it...trust me).

4)I cant think of number 4.But from what I remember its pretty good.

5)If you think something will offend people, it usually will. But that shouldn't keep you from doing it.

6)Never put a weasel in your gas tank. (okay I never leared this from your blog either. But someone suggested it would be a good way to get the banana out of my gas tank).

7)The Yankees are love.

8)If your computer smells like its burning, turn it off pronto. Again you'll have to trust me on this one. (if it smells like burning fur,check for weasels).

9) If your wife tells you that she is leaving you, ask if you can go with her.

10)Blogs don't have a way to edit them after you post a comment...now they tell me.

11)The Yankees are love.

12)The internet is to newspapers, what the digital camera is to photojournalists. And thats a bad thing.

13)Weasels are relatively cheep to replace,and because they all look alike, it easy to trick the kids.

14)The Yankees are love.

Well I only have three years to get my blog up, so I should get going...

I feel obligated to reply here because I'm one of the people who always does. Several things. The most important: Iris, I did not know you had skin cancer. The operation seems to have turned out fine, but I know you were terrified. Just hang in there, as you always do, with people who say the wrong things. And take care of yourself. Second, the grandbaby is beautiful. And third, a book??? You're publishing a book?? Tell us more! Love, Bebe

If only I'd read this prior to placing that #@*!@ weasel in my gas tank!

Ya know what? Humour doesn't have to universal, as long as it works for you in your world... Well, at least as 'I' have experienced..

her t-shirt says it all

Two things: Michael Harding is funny but needs more to do. Second, we care and are faithful readers.

By the way Anonymous, whoever the f&%k you are, you may not care about this blog, but it seems you took the time to read it and post a comment. You're not only useless, you're also stupid! Please do the world a favor and jump out a window...a really high one.

Thats odd Seth, I actually do mean Spooge. I spooge you Seth. I really spooge you. Just like Captain and Tanille, Muskrat Spooge...NOT...

If the Blue Jays can beat the Sox ,sweep,sweep,sweep,thats a bad sign...they're going down,hard. Nice homer to win the other night though. Although A-Rod topped it shortly after with the grand slam. 1.5 games and closing! Feel the heat???

By the way "Anonymous", you should have seen Seth BEFORE anger management classes.

I suggest "Anonymous", that you tread on another blog for your witless jollies.

It really is unacceptable to blow a 14-game lead. My wife is keeping the faith but I live and die with only ONE team---THE PATS.
And we have our own problems there. But all cameras aside, we just keep kicking everyone's asses.
THE DYNASTY ROLLS ON!!!!!!!!!!!!
R-A-T-S! RATS! RATS! RATS!

This is so much better than t.v. I so love the banter and the dynamics! Harding, you are a riot...on the edge of "Sick" but we love you...Don't even get me started with the Yankees vs. Red Sox. Best we don't go there in this crowd. I think it's safer to talk religion.

Anonymous is is a REAL jerk and I think he should be black balled from hangin out with us. Maybe if we just ignore him he will go away.

Maybe it's okay that Harding doesn't have more to do. He might get into something like a crappy 9-5 job that will make him not happy and he won't be funny anymore...

If you think Harding needs more to do then what is Walter's excuse? He's a head case too. What do these guys eat for breakfast?

With the gas prices these days, why would you ruin a perfectly good tank of gas by adding a weasel OR a banana? Do they add them before or after the sugar?

Okay..I'll let you in on my breakfast secret..

I eat Ilford HP5, with a sprinkle of Arista 76..and down it with a glass of stop bath to clear it out.

When I'm on the go, I bring a bottle of fixer as a sport drink..

Is that far enough out there for you??