The End is Never Easy

When I was a freshman in high school we had to take Home Economics. That meant for one semester we took sewing and the next we took cooking. We were delegated to kitchen and ‘home making’ arts. I was not happy about this but I really had no choice. I was lucky to have been allowed to take a college curriculum, when the advisor in eighth grade said I would never succeed, so I should just try to be a good secretary. 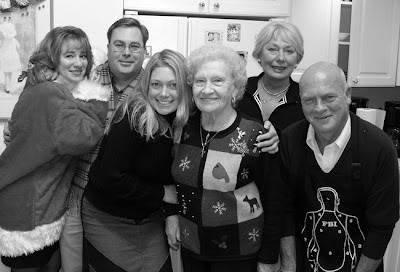 Anyway, there I was struggling to make a skirt—that was our first assignment, when like a gift from God this person appeared and said, “you don’t have any idea what you’re doing, why don’t I help.” Since I hated what we were doing I decided to allow her to help me. If we had waited another minute and I knew who she was, I would have begged her to do the same. Thus began my life long relationship with Joyce Silbernagel. She not only made my skirt but understood I was so inept that she simply completed everything we were required to submit. The skirt she made and I took credit for was fabulous. The fabric was quite classy and not high school quality. I kept that skirt for 20 years and then sorrowfully lost it in some move. 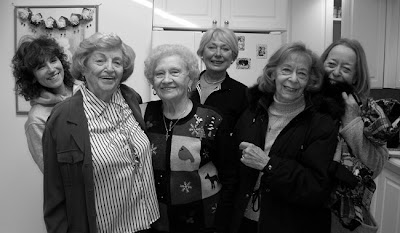 The girls (Iris, Joyce, Pam) and their moms


Joyce was a straight A student, on the student government and she was a cheerleader. You couldn’t have found a more perfect child. But her parents seemed never to be satisfied with all her accomplishments. She was not allowed to do things we all did—like go out for fun. When we all went out after a game or an afternoon of pretend study, she was forbidden to go. So, to her credit, she simply lied about where she was and played with her friends. Her parents were nice people but they just didn’t get it. At some point, she moved in with my parents because dealing with hers was hopeless.

Flash forward twenty or more years. We are all married with children. Our mothers, who never spoke when we were children, are all invited to celebrate Christmas at Joyce’s. Aggie, Joyce’s mom, is a bowler and a wonderful athlete. She has had the courage to have some plastic surgery, so at 80 looks 70. Claire (Pam’s mom) is feisty and fun and never at a loss for words. My Mom is surprised that she enjoys being with all of them, but doesn’t hesitate about how much she looks forward to it. They bond like they had always been friends and we are grateful because we daughters have been friends forever. We spend 10 wonderful years celebrating the holidays. We have established traditions such as Jordan being required to sing a medley of songs she has rehearsed for some performance. It is amazing that all these relationships have come together and it is surprisingly comfortable. 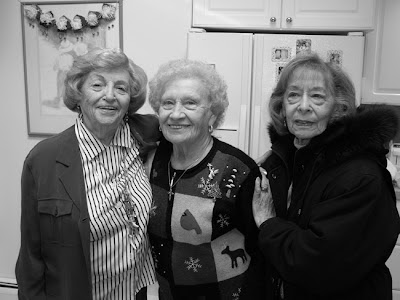 Aggie died yesterday. She was in nursing and hospice care and she died peacefully and without much fanfare. There were no hysterics because after months and months of her waiting to die, she did. But does that make it any less sad. I don’t think so. I had known her for 43 years. Sure she was my friend’s mom but I spent many hours at her home and more hours trying to convince her that she should let Joyce have a date—it didn’t work. But I loved her and respected how strong and determined she was about right and wrong.

Joyce took such good care of her. There are pictures of Aggie 20 years ago when she looked 20 years older than she did 10 years later. She was a beautiful woman with a smile that lit up the room. On Christmas, she always wore a red sweater that made her glow far beyond expectations. The mothers, who, as I said were not friendly when we were kids, found new and interesting life issues to discuss. It was so much fun for us to watch them connect. And it was unexpected. And we daughters found a new closeness in their new found connection.

Joyce has six brothers and sisters who were moderately involved in mother care. Mostly Joyce and Ronnie did what was needed to be done, with the help of their children. They were exhausted by all they did, but never complained that it was too much. They just did what they needed to do. They went everyday to make sure she was eating and last week when she stopped eating they watched helplessly as she faded away. They talked about how, when they passed a Carvel or someplace where they went with her, it was strange. There was no longer a need to stop at any of these places or the nursing home. It felt strange and lonely. As much as they talked about having to do it—now they missed it. I guess, they understand how deep and important is the loss. I will miss those times with all the mothers. Last year Mom was too sick to attend, Aggie couldn’t walk and Claire was with her family. It may have been a sign of things to come. I don’t know what you do to end a tradition, but whatever it is—it doesn’t come easy. We’re just sayin...Iris
Posted by Iris&David at 11:54 AM

Let the Wilde's know we are thinking of them at this time, so sorry to hear of their loss.

P.S. Did Jaimie have the baby?

Sorry to hear of your loss.