And the curtain descends on an act fraught with suspense and angst. Today we moved my mother out of Victoria Mews – her beloved assisted living retreat. We haven’t told her that we did it because there really is no need for her to know. When she’s healthy and walking we will put her on a plane (we decided an RV simply wouldn’t be as colorful as we imagined) and we will take her to Seattle to be near Jeff and Els. The thing is that she needs to be someplace where someone will see her everyday and that is no longer in New Jersey. Even her friends, who were fairly steady in their appearances are now too sick to make the mile and a half trip. Helen’s cancer has spread throughout her body and Rose’s balance is way off. She says she pulls to the right whether she’s walking or driving so it’s much too dangerous for her to do either.

It’s amazing how quickly things deteriorated. It was just five months ago that Jeff and I shopped for new furniture and Els and I moved her into Victoria Mews. We had begged her to consider it a year ago but she was determined to stay in her own house. We still can’t figure out why, except that being there was a 55 year old habit. I wish she could have been more like David’s mother who has always known when it was time to change location for the better. Like when my father in law could not longer drive they sold their house and moved to the 6th fairway of the golf course. And when my father in law died she sold that house to a guy who happened to be walking down the street and liked the idea of living on a fairway. She sold it to him and moved into an apartment in down town Salt Lake. Then she decided that she was over Utah and she moved into an independent living apartment in northern California. She never looked back. No regrets as Edith Piaf would sing. But, as my mother would say, “What is, is”. (She also says, “what was, was - and dead’s dead” but I do not choose to pursue that line of thinking.) Our reality is that my mom never really wanted to look forward. As we left the rehab center yesterday David pretty much said it.... “There seems to be no joy in her life anymore.” Not that her family doesn’t make her happy, but she can’t remember why. We hope that will change as she heals.

And speaking of curtains and acts, we took Jordan back to school on Saturday. (Maybe I should talk about chapters and closing but I think stage jargon is far more interesting.) It’s impossible to believe it, but she is a Senior in college. We drove up and back within 24 hours but we had a chance to have some interesting conversation about her dreams and goals. At one point she was recounting a conversation with a friend and she confessed that she was as “cut throat as they come” in her business. This came as a total surprise to both her parents because Jordan is the sweetest child anyone has ever raised. (She has David’s disposition). Let me say, we were delighted to know that she “would push an actor down a flight of steps” to get a part. Now that may seem a bit gruesome, but in the theater business, in order to succeed, you have to be willing to be aggressive about what you want. We have always watched as she seemed to allow other people to get ahead of her “in line.” When we told her how happy we were to hear that she understood the nature of her business, she told us that we had underestimated her, and she was just smart about the way she operated. We all did high fives and took a deep breath. Can you imagine celebrating the fact that your kid is not always a nice person... Oh well, there goes that “try to be nice” training – thank God.


Anyway, the weather was beautiful, it’s getting to be fall in New England and there is no place prettier. The only downside to the trip was that we didn’t have the time or energy to make it to Plymouth to see Seth and Joyce and Zak. We had to be up and back in enough time to move mom’s stuff and I couldn’t lift anything (Zak is in that “over one pound can’t lift because of the surgery” category) so David and Chris had to do it without my assistance. Three people make it both faster and easier. 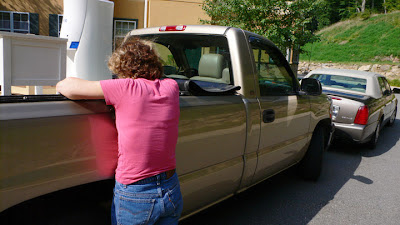 I' and Nana's stuff in the truck
This whole experience has made us realize how tenuous life is. One day you’re up walking around, being a pain in the neck and the next day you can’t remember if you went for a walk. Given all that we and so many friends are living through, it’s hard to decide if you want to live for the moment because you don’t know what the next moment will bring, or you want to invest in long term care, because you know what it means to be without it. 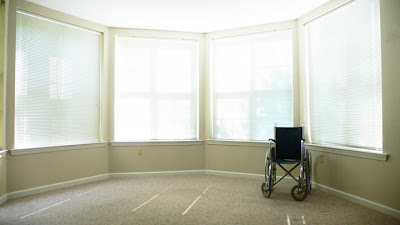 Leaving Rose's room at Victoria Mews for the last time

I guess we just need to look at life like it is a play. There are three acts with many different scenes. The first is how you became the person you are. The second is how you chose to live as that person. And the third is how you prepare or chose to say goodbye. How will you measure the impact you had on the world during the first two acts And what will happen when the final act is complete. I guess we’re all hoping for at least one curtain call. We’re just sayin...Iris
Posted by Iris&David at 9:06 AM

This is the final "coming of age" event in our lives. That doesn't make it easier. At least you can look forward with Zak. Marthena just realized that Patrick will be 50 in six years. Me? I'm just pulling for November and 63.
Love,
Joe