Some people are just plain dumb. Like today, I’m taking a walk with the love of my life (and please! no one in my immediate family should get jealous), Zachary Alexander Jacobson. To be accurate, I am walking and he is riding in his pram—after all he is only five months old. So there we are, on a glorious day, sightseeing and working the crowd, in Plymouth Ma. We walked by the disappointingly protected Rock and as we are approaching the Mayflower a woman approaches us. 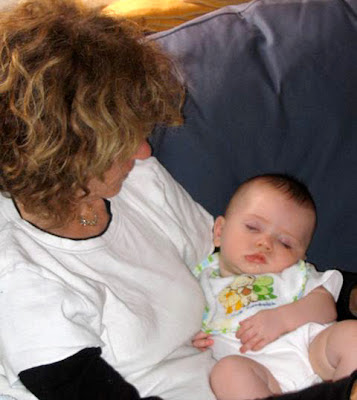 Mimi with the Sleeping Zak

“How old is your baby?” she asks. I should say that we had just left a coffee shop where a pregnant young woman had mistaken me for Zak’s mother instead of his grandmother. Of course, I was flattered and corrected her and she was most complimentary. “Oh” she said, “whatever you do I’d like to be doing as well. Can I follow you around?” (OK so that woman wasn’t so stupid, just blind). Anyway, having received this praise I expected that maybe this other woman was about to say something nice. I was wrong. “He’s five months,” I said. 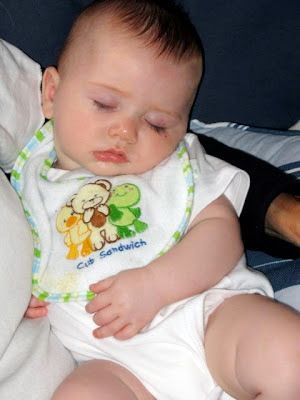 “Well you better watch out”, she started. And then she launched into a tirade about school shots, school yard bullies, infant diseases. I was clearly not interested in what she had to say. I tried to say goodbye but the woman wouldn’t hear of it. As I turned and walked away she actually followed me. I started to walk faster and she kept up with me. Finally, in desperation, I said please leave us alone, I am trying to get the baby to sleep. Zak was enjoying the ride, he could have cared less about the nut tracking us step to step. But that’s the point, she did not appear to be a nut, just someone who was overly concerned and without any common sense or judgment.

It’s like the week before I had my skin cancer surgery, any number of people shared horror stories with me about people they knew who had similar surgeries and were now deformed. One friend, at least waited until after my ordeal to tell me that she had a friend who had a dot sized mole which turned out to be so deep she practically had to have her face taken off. And it’s not that I’m so vain. I am simply cute. You know hard it is to be a cute 60 year old? Further, you know how much harder it is to be a cute 60 year old with a giant facial scar. As my cousin says, “so consider the alternative” – my cousins are mostly very smart. Anyway, it’s hard to repeatedly hear these things. There were also people who told me it was nothing—they were smarter and a little more sensitive to the possibility of my pending hysteria. But why is it that people feel they need to share or compete with any awful things they have either heard abou,t or experienced, in order to participate in someone else’s problems?

How many times have you started to tell someone a story about something terrible or something wonderful and the person to whom you are speaking says, “Oh that’s nothing”, and proceeded to tell you a whole other story—not even necessarily on the same subject – that in some way related to them. Maybe it’s just that people like to talk. before reality TV was a core part of our viewing fare, I thought it would be great to go to a swimming pool in a retirement community in Miami and simply film the answers to the question, “So, how do you feel?” In about three hours you would have enough material for an entire season. And it would be hilarious. You would not only hear about Sadie’s ailments, she would share the trials of Alma and Hilda. And whomever was with her in that squared sea of turquoise, would do the same, and more.

But back to people who blurt with seemingly no control. I know a woman (who is not my friend), who absolutely cannot hear anything without commenting. She is an expert on everything from building furniture to nuclear proliferation. There is never a time she is without something to say – and it’s mostly filled with doom. If you are pregnant she will remind you of all the things you have consumed that will inevitably kill you (or worse), the baby. If you say your kids are in public school she will make sure to talk about the incidents of a strain of hepatitis that is running rampant in public schools. And you can’t escape it no matter where you live. When Seth went to private school it was no different – he was bound to be a drug addict because people who sent their kids to private school were so rich they bought drugs for their children, who would immediately sell them to your child. If you mention your kids are having a sleepover, she will talk about all the kids that have been kidnapped and murdered at pajama parties. When Jordan started to drive, this woman was capable of quoting the statistics of every car accident with which any kid between the ages of16 and 19 had encountered in 35 states over the last 5 years.

And it’s not only about kids (although that is a priority, and, let’s face it, a rich vein to mine). The market where you shop is known to have bugs in the cereal. The furniture store where you made a purchase never delivers on time. And the hotel where you stayed for a few days, never changes their sheets or pillowcases. Are you starting to get the picture? I am sure you know these people as well. They are certainly in the “sit down and shut up” category, but if you told them to sit down and shut up, they would merely reply that you were stupid not to listen to good advice. The old “in one ear and out the other” doesn’t even begin to describe these people.

Have you noticed I am brimming with aphorisms today—it must be the weather. So here’s another. You just have to “turn a deaf ear”. Or maybe a simple “I know you are but what am I?”, will stop them in their tracks. Probably not and “I don’t want to hear it”, doesn’t work either. Here’s the reality; there are people who know no boundaries. They actually believe that you want to hear what they say. Maybe they are lonely or perhaps so self centered they can’t get beyond the fact that what they have to offer may not be important or accurate. I’m a simple cute person so any analysis is beyond my comprehension. I just think that no matter what their I.Q. , as my mother would say, they are “smart, smart, stupid!” We’re just sayin....Iris
Posted by Iris&David at 9:41 AM

Nice, very nice. I check in, I read and I go back to work. But I'm thrilled your here and very pleased that you've continued. If
you've blogged about what you've learned by blogging, I haven't seen it. Direct me, or write it.
I hope you had a happy new year!

The kids have a great expression: TMI. I have a friend who WILL share with me every grisly detail of whatever medical procedure is going on in her life. Being a hypochondriac, this is on going. And, she's hard to interrupt. I did recently in a gum tissue monologue by blurting outline, "TMI" She was startled, paused and asked, "what's that?" A small victory for me, but, surely shortlived.