In my fourth and last day of this quick trip to France, I keep seeing, hearing, noticing things which are very much “of France” and not, shall we say, “of New Hampshire” or “of Idaho.” This doesn’t always mean they are better, or necessarily worse; just a bit different in the way they exist, and how they are interpreted. Let’s start with hotels. Well, actually we should start with Money/Economy. The dollar is sucking major canal water these days. Those of us who remember the early days of the Euro, that toy currency which worked all over the place, was valued at about 85 cents on my first “no more Lire/Franc/Mark visit.” It actually seemed about right. The terrible thing which happened in all of Europe after the change over seemed like some kind of plot by the forces of darkness and evil in Brussels (and now, with the Euro Parliament, in Strasbourg.) Overnight, as the French went from Francs with a buying power of 20 cents or so, the jump to the Euro (5 to one, roughly speaking) was accompanied by enormous ACTUAL price increases. Something which had been the equivalent of a buck was now more than two. All the merchants seem to have decided to do the same thing at the same time … raise prices drastically, taking advantage of the adjustment time, and make a killing. The issue for the locals here remains the fact that things never went back to the pre-changeover valuations. So in many ways, the cost of living the same life you’d gotten used to, and could afford, was double. There were some rumblings but I was frankly astonished that not a single European Capitol Legislative body was burned to the ground. Had the peasants revolted, stormed the National Assemblies, they surely would have had my support. Meanwhile the folks in Brussels keep thinking up things like “lets make sure Italian farmers in Piemonte, who have made cheese XX for a hundred years, are only allowed to produce a third of that. We have to protect the Norwegian farmers don’t we?” Bad decisions made for bad reasons. Over the last few years as one country after another has voted against the European constitution, the rumblings were a bit more apparent. Now, of course with the US struggling to maintain its leadership role (oops, that was six years ago, wasn’t it!) and the economy over extended, the strength of the dollar has plummeted. Sure, in some places, Cambodia, Honduras, you can probably do all right. But if you are paying $1.40 for a Euro these days, and realize that the only thing you can buy with it is a mini pack of condoms and an espresso coffee while standing at the bar (its 3+ Euros if you sit down), the shock and awe of the inability to live well is startling. Im currently in my “modest” $400/night hotel in the 7th, nice enough I suppose. Sure, a little more velveteen on the chairs than at the Comfort Inn in Portsmouth, New Hampshire two weeks ago… but about 1/3 the size, only 11 crappy t.v. channels (not that I care, but it’s kind of a barometer) and an internet line reminiscent of Compuserve Dial up in the 1980s. 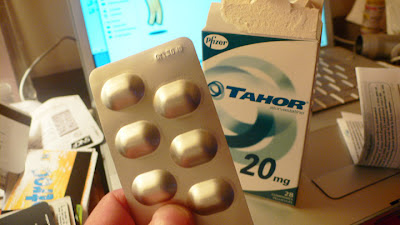 less than half of the price at Costco

I will say this, you can buy drugs cheaply. The two drugs I am stated to be intimately involved with for the rest of my life are less than half of what Costco (the cheapest we’ve found) charges, so Im buying six months worth, in hopes that between my cholestorol and my prostate, I have made a great bargain. It isn’t quite the administration telling us we can’t reImport from Canada, but it kind of feels like it.

Apparently I’m not the only one annoyed by the state of things. Today, in all the big cities in France, the cab drivers went on strike in the middle of the day for several hours. I went to Strasbourg to photograph Michel Rocard, 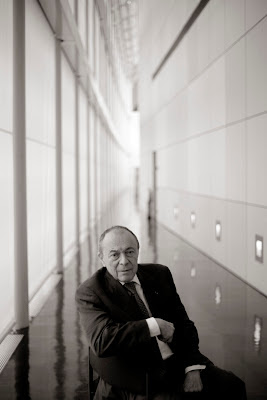 A digi of what the 4x5 should look like


the former Prime Minister under Mitterrand, a gent who I took pictures of 30 years ago, and wanted to follow up on. When I got out of the station in Strasbourg (give them credit for the TGV trains: they haul ass, and are really on time. Not Amtrak time, real time) I hopped a tram towards the European Parliament offices on the edge of town. There must have been two hundred taxis and drivers huddled around. If you had to be somewhere today in a cab, you chose the wrong day to try and be somewhere different than where you are. 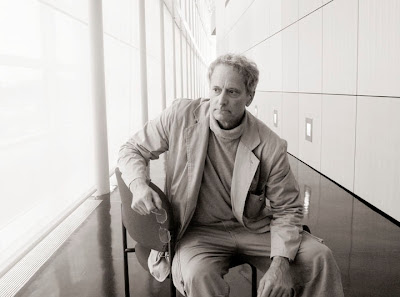 Me, trying to see what the light looks like..

The trams (good bargain) run smoothly, quietly. The only time it got a bit rough was when three professional drunks, dragging their worldly items with them, had one of those “I love you , I hate you” conversations. That got my attention all right., even though they didn’t ask for money nor wine.

But I forgot, I think I’m telling you things to do and not do: In no particular order…

1) buy a public phone card for 20euros as soon as you hit the ground. They make calling the states a reasonable proposition, and you can chat in town as much as you want. I also bought a SIM (electronic) card for my old European system Samsung cell fone (2000, Sydney Olympics – we had to buy them!) from a local TABAC dealer: They are one of those French fixture things…as in, nearly every corner has one: You can buy a beer, a cigar, a paper (in some) and cards and recharge cards for a mobile fone. Sounds like a good idea, right?

1a) Don’t smoke the cigar you’ve been carrying around for two months INSIDE that public phone booth. Non, the French could careless, but for those few of us who use the public facilities, the smoke backdraft is quite heavy duty. 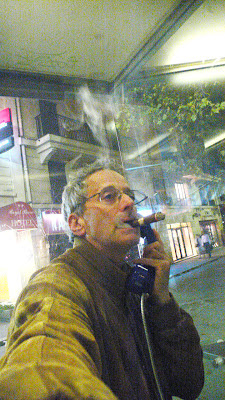 A no-no: Backdraft in the Fone booth..
2) If you take medicine in amounts that would choke a racehorse, take an RX from your doctor (in Italy you can just by them, in France you need an Rx). You, too may be the lucky winner of affordable medicine.

3) Don’t be afraid to try the Specialité of the day: today it was, in a small bistro in downtown Strasbourg, a version of Choucroute: 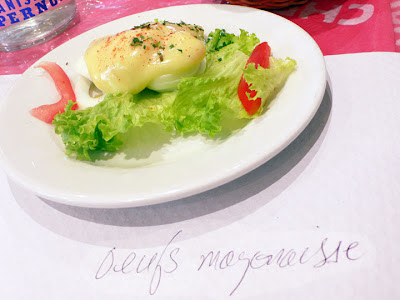 Give full credit for made In-House mayo, though the eggs aren’t deviled (NOTHING like the ones Joyce grew up with in Mass., trust me on that one). The smoked meat did briefly make me wonder if it was smoked, indeed, or perhaps just strapped to the manifold of a TGV train for three hours. The mound of kraut? NO ONE needs that much sauer kraut in a sitting. 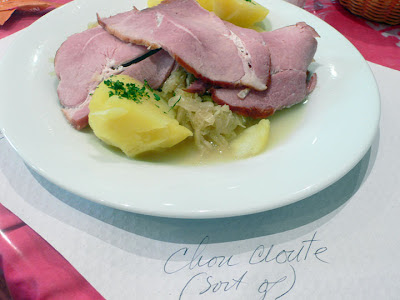 The red wine: Never turn it down. Even the house Plonk is quite suitable. 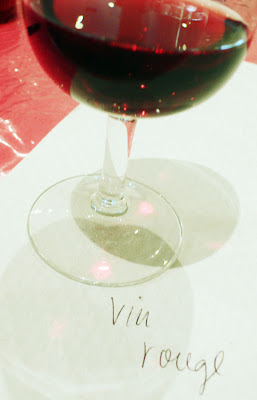 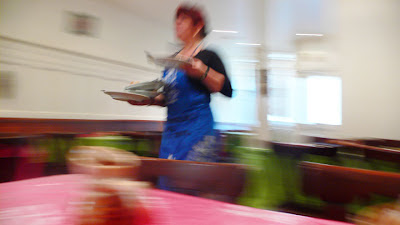 Somehow they manage to serve 4 tables and bring the check


Unless you pass by a great little (patisserie) pastry shop, desserts can be those pre-frozen things which were eaten by PiltDown man 70000 years ago. 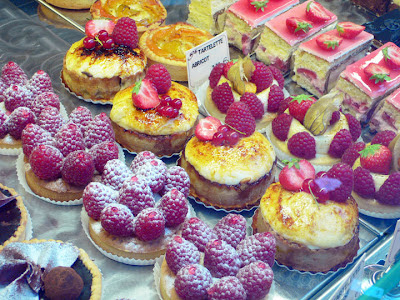 Just because they are covered in flavor crystals doesn’t mean you should say yes. Do say YES to Rucola salad at any pizzeria, even in France. Don’t ask why, they just seem to know what they ‘re doing.


4) Make sure the bathroom is not given onto an outside window. If you have to reload your 4x5 holders, there isn’t enough duct tape in the world to black those windows out. Just go for the interiour bath room. Your Tri-x sheets will thank you for it.

5) If you have a meeting with someone who was once in politics or business, but are somehow unsure as to which title to use, always use “Monsieur (or Madame..) le President”, for as an AFP pal once confided, even if the guy was only the President of his bowling club, he WAS the President. 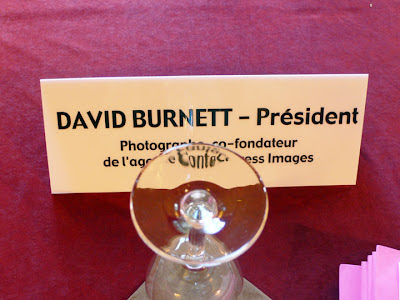 I was the President of the Jury for the Lagardere Prize on Monday of this week, and so henceforth, I would appreciate if you lose the David, Dave or Snookums, and just call me by my rightful appellation: Mister President.

6) If you live anywhere near a language school, or have the Rosetta Stone cd program, do practice your French for a few weeks before coming. It makes a world of difference in how people treat you and react to you. Stumble if you will, but that is the one area, for sure, where the French, in cultural appreciation, will cut you a major break.
6a) Don’t use the Tu form of You with people you haven’t either raised or slept with (Ill admit that broadens the talent pool.) There is something old fashioned about using Vous, and folks don’t always get the joke of American informality. Once, years ago, I called the President’s offce and asked his secretary “comment vas-tu, Madame?” Claire Senard, whose fone I was using, had to be picked up off the floor. She had probably never heard anything so gauche in her life. Moi? Well it seemed natural, but you do have to watch these little things.

On my first trip ‘en famille’ to Europe in 1960, tender age of 13, we met up with a former Salt Laker, Selden Wells, who in addition to having a super cool name, had left the states in the early 50s and settled on the Left Bank. He became very French without losing his kind mountain west roots. He showed us the town like few people could, managing with his perfect French skills to open all kinds of doors for us. It was wonderful. I kind of have a vague memory of mom telling me Selden died twenty years ago , or so, and as I sat in a bar in Odeon, yesterday having a coffee, 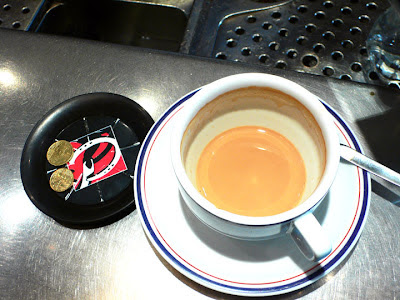 "a deca' creme..."
and getting ready to visit the Senat to photograph Pierre Mauroy, the former Prime Minister, a guy came in and stood next to me. He was in his 50s, which is kind of how I remember Selden, though, born, in 1922, he must have been not even forty yet. This guy, at 11:30, ordered a draft beer, looked lovingly at it for a minute, then slowly polished it off in about a five elegant gulps. Paid, gave one of those “Ok, now I’m ready to get through the middle of the day!” sighs, and off he went. He kind of reminded me of Selden, and made me realize how much, now that I’m a grown up, I would have loved meeting him this trip in Paris, hitting an old favorite bistro for a great little dinner, see a gallery or museum show I otherwise wouldn’t have known about, and just sit in the Champs de Mars, watching kids take pictures of the Tower, their necks craned at full tilt. It’s a pity we can’t always have the people we’d like to have, when we’d be able to appreciate their company. I suppose we need to appreciate it when it’s given to us, because as we all speed through here on our own tickets, you don’t always get to choose who’ll be around for that beer and who won’t. 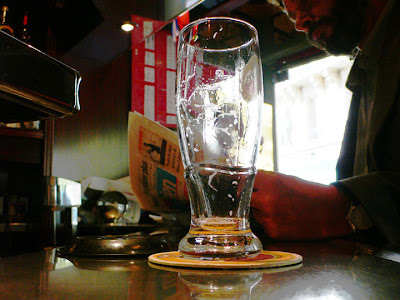 Thank you ;-) look at that emo boy hair on this blog:
http://emo--boys.blogspot.com