Who Can Find the Time?

We never have enough time to do all the things we want to do or see all the people we want to see. On this the Jewish New Year, when people call to wish you a happy New Year, you start to understand how many people you don’t have the opportunity to stay connected with on a regular basis.

Maybe it’s me, but why would the President give a major address on the first evening of Rosh Hashanah. I think it’s disrespectful. Would he give a speech on Christmas Eve? But respect is not something I would ever expect from a person who has never shown any real character. My unofficially adopted son, Will, called yesterday to wish us a happy New Year. When he came to live with us three years ago, I took him to holiday services as a way to expose him to some religious cultural differences. He had never been to any Jewish services, let alone High Holiday services. 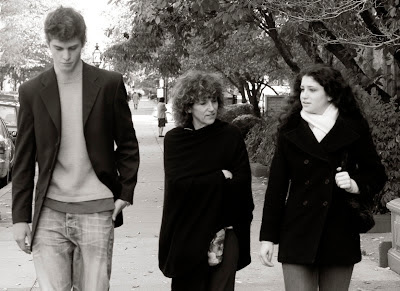 Will, I, JKB in Boston

Will is from England. His grandfather came to the states, married and stayed. His father grew up in the States and Will has an American passport, as well as a British passport. He’s at Georgetown as an exchange student—I don’t get it but I don’t have to. Anyway, there is nothing I would like more than to spend some time with Will. But who can find the time and I’m not geographically in a place where that’s a possibility.

Today I am going to see my grandson — the fabulous Zachary Alexander Jacobson. Seth and Joyce live just south of Boston in Plymouth (yes, that one, the Rock, not the car). They have chosen to make their lives in this area for many reasons. They grew up in there, her family is there, they have good jobs, there are good schools, their friends are around, and they see it as a place with lots of opportunities. I love New England but I hate the weather. I lived in Boston and the surrounding areas for about thirteen years and was in a bad mood for ten of the twelve months each year. Maybe it wasn’t only the weather but mostly it was. Anyway, much as I would like to see the kids everyday, it can’t happen because I don’t live nearby and it is not easy, with just every day demands – and a winter that lasts forever.

As a matter of fact, I have lots of close friends who live in Boston who I can’t see as much as I’d like. Our dear friend Tom Herman, who David and I think of as a brother, and who Jordan has adopted as her uncle. There is nothing she likes better than hanging out with Tom. True, he has a great apartment on Commonwealth Ave, but that the apartment is not the draw, it’s the warmth and comfort she finds in Tom’s company that has the real appeal. We love spending time with him but sadly, we don’t make the time to do more of it. 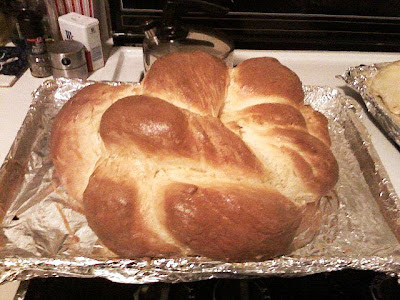 A Prized Iris Challah
Last night we had a lovely holiday dinner with Jordan and her roommates. We made a kind of beef bourguignon I prefer to call “beef you can eat with a spoon”. The meat was accompanied by a delicious wheat noodle kugel, green beans stir fried with mushroom and garlic, tomato caprese, an apple crisp, and of course, a cake challah. Becky, Jordan’s roommate who was brought up as a religious person, was feeling a bit low because she wasn’t with her family and it was hard to find a temple that didn’t charge for a seat—it’s a real problem for so many people who don’t belong to a congregation but would like to celebrate the holidays. We talked about services and how the prayers in the siddur (prayer book) are written by people not by God. And there was no reason we could not write our own service. The kids determined that they wanted the “service” to be a sharing of aspirations and goals. So that’s what we did and it was terrific – even better than the food. The girls are both thoughtful and articulate about their dreams – and they are not yet hardened to what they will have to do when reality strikes. But that doesn’t matter. Their drive and determination are breathtaking and poetic. In that light, after dinner, we did a musical play reading. Camille, wrote it based on the old song “The Muffin Man”. She wrote the book and the music and it is very good. I’ve paid more to see less on Broadway.

We had been invited to Beth Stone’s. (She’s our cousin by choice and Soozies cousin by birth). Beth is a creative, talented and beautiful public relations professional. But most importantly, she’s a generous and loving person. There has never been a time when Jordan needed anything, that Beth wasn’t there to help her. She was having about 20 people over for a 5 course bite. We had already committed to the roommates, but Beth is another one of those people who I would like to see on a more regular basis.


Much like on Christmas, friends from around the country have sent cards with good wishes. Some of them have been by snail mail and some on line. I’m not sure how I feel about cards on line. When people send me a note on line, there is a part of me that feels like they just didn’t want to be bothered going out, selecting, and then mailing a real card. It is easier to link onto some card site, scan a selection for 5 minutes, and press a button. Then I think, well would I rather not hear from them and additionally, they are as busy as I am, why would I think I am alone in not being able to find a minute to do the things I want to do -- so then I think any kind of communication is fine. So, going forward into the New Year, please slow that clock down just a little. We are lucky enough to have a lot of people to get around to. We’re just sayin’… Iris
Posted by Iris&David at 8:49 AM

I didn't watch Bush last night 'cause I just can't, regardless of the day.

But you're right, I never thought of it, but giving a major address to all citizens on the first evening of Rosh Hashanah, or the next night on the start of Ramadan, is completely disrespectful.

Sorry I missed all the food. Right now I'm just trying to get our well pump working so we have water in the house. We haven't had water since last Sunday. Country living is so fun. Grin. Today the experts are down in the basement trying to figure it all out. Funny though, they are doing everything I've done this past week with the same results. No water. ARGH.

I think we'll go out for dinner tonight.

It sounds like a good time to, for once, be sure and ask for a glass of water at the Cafe. You never really prize a simple, clear, cool, elegant, shimmering glass of water till it becomes a major operation to enjoy one. We hope your aquatic engineers are able to solve the mystery. We all take so much for granted, though surely a couple of years of seriously country living has given you a new perspective and appreciation for the simple things that usually work. I feel that way about electricity. Aside from a bad storm, or something in the 'act of God' category, the power is always on. We are so spoiled. Hoisting a wet one in your honor, and hoping you can soon do the same... W.J.S. ... db

"it's A Wonderful Life" has that great scene in the end where it is said that when you've friends, you're the richest person in the world.