Another Note to the "People of Western Europe"

I flew to Paris yesterday (Sunday). I am the President of the jury which determines which young photographer will receive a “bourse” – a grant – of 15000 Euros..which while it may have been only about $12000 just a few years ago, is now worth some $22000. (This could be an accidental plug for ‘buy and hold’ investing, as long as the investment in question is one that challenges the Dollar.) It is quite something for a young photographer to get a grant like this. There are a few places around the world (the Gene Smith, and Getty grants in New York, and others) where a large chunk can give someone a headstart on a project which they otherwise would be challenged to finance. In many ways, you can – once you have spent a ton of money of digital cameras, back up gear, laptops and hard drives—operate rather cheaply. You keep re-using your memory cards as you back up your work on small, portable hard drives, and the $20-30 per roll for film, processing, contact sheets, etc, which formerly made the cost of shooting hover around a dollar a shot, plunges significantly.

With a handful of Memory cards, whose price keeps falling as quality/speed keep advancing, you can produce a LOT of work which has a fairly low sustenance cost. Of course the $1500-4500 per camera, the laptop, the drives, all amount to a good chunk of money just to get out of the gate. And such economics do, I believe, change the way younger photographers will look at the world, and how they will attempt to capture that world in pictures. The high school/college kids just now picking up a camera may very well have never actually held a roll of film in their life. They don't really know what a "roll of film" is. We are producing, for the first time since the invention of photography a hundred and sixty something years ago, a generation of photographers who not only have no idea what the chemical/physical processes are in the darkroom, but whose idea of a “negative” really means nothing. There is no ‘Negative’ in the digital camera. There is only the little picture on the back of the camera’s screen, which more or less confirms to you right away that you screwed up.. or not. But the alchemy which made photography that something special all these years, has been, like so many things, pedestrianized with the digital revolution, and made available (horrors!) to the masses. What of course hasn’t’ changed is the way which individual photographers take the camera, and put themselves at the moment of key interest, in front of a subject, camera at the ready, and finger ready to pop the button. It’s the ‘getting to that place’ bit which makes photographers different from most other folks. It’s knowing what might make a good picture, where you have to talk your way into, who you have to deal with, and with all that done, and carried out, still having a clue as to just when the Moment of moments will arrive. 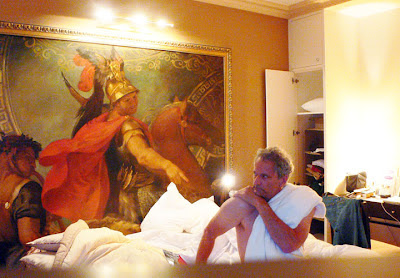 How do you sleep with this guy riding by your bed all night? Really!

Everything we do in this day and age is so aligned in the ways of modernity. All you have to do is turn on the TV in your $450 French hotel room: there are a total of about 11 stations – much above the long standing 3 of the years as late as the 1970s - though a rounding error on a modern US Cable system. The three main French broadcast channels (1, 2,and yes, 3), Canal Plus ( 4, basically, a kind of lousy version of HBO and which my hotel doesn’t get), and a smattering of Spanish, Italian, MSNBC(world), and CNN(International), fill out the mix. The French are still strong with those long winded talk shows, not of the Jerry Springer, or even Jay Leno variety, but something more akin to Arthur Godfrey: half a dozen blowhards sitting around a table, yammering about things which you have to really care about in order to stay tuned. Mind you, I’m not against “conversation” or even the French definition thereof, but I still find that as late night fare, these shows don’t match up with Nightline, or even TCM 1940s movies. And the news shows have almost no News. It’s all done like Headline news, which of course means that if you leave the set on for more than a half hour, you will hear repetitively, the news of Marcelle Marceau’s passing, the return of Fujimori to Peru, and the lack of a Sony presence at the Tokyo Game show. You have to wonder what is the point of all this technology, sometimes.

One of the sanities I carry with me is the very personalized – as most are – iTunes selection which graces my laptop. I was getting squeezed for space – my 60 gig drive, between music, media, and pictures was filling up. You know you’re pushing it when you have to zap to the trash some long favored file just to bring a new one on board. So, having just left the comfort of Applecare, the Apple 3 year insurance policy, I sent my aluminum beauty off to MacSales in Illinois for two days of upgrading. It was like sending your laptop to a Day Spa in Palm Springs: it came back with a dual layer DVD burner (8 gigs instead of 4), more memory, and most importantly a 160 gig drive. So for a while, I can add an Eisenhower speech or Al Bowly tune, and not have to erase something just to make space.

Most of you who care (are you both listening?) know of my fondness for the people, places, and meaning of D-Day. Almost by accident I went with a couple of pals to the 30th anniversary in 1974, and became enthralled with the place, the vets, and, yes, the hoopla. It seemed to represent for me, all that was good in that “greatest generation”, the selflessness which was manifest in the young troops who stormed an inhospitable beach on a not very nice morning, in hopes of establishing a beachhead, and eventually of ridding western Europe of the Nazi presence. I was born two years later. I grew up in a world essentially at peace, despite the ColdWar-ArmsRace-MissileGap-DomRep-Lebanon-Vietnam conflicts of the 50s and 60s. Europe was still the Europe we kind of knew about: to make a phone call, you had to buy a coffee at a café, ask the bitchy woman on the Caisse desk, would she be kind enough to turn the pay fone “on”, would she be kind enough to sell you a Jeton – a token which would arm and make the phone ready to use, and hope that when you dialed the number it might actually go through. Quaint enough, surely, but the coffee was always good, and dealing with the bitchy cash lady probably did, over time, great things to extend my ability to speak French. Now, of course, anyone who is anyone has a mobile fone, and the will to use it virtually anywhere. The idea of France, this giant country of wine, and veal scallops in cream sauce, and funny looking cars (yes, the Citroen DS from the 60s STILL looks like a Frog ready to pounce on a bug), under armed occupation is something that few of us can conjure up. One of the tracks I keep on my iTunes is Ike’s speech to the People of Western Europe at the time of the Normandy invasion. The speech had been taped a day or so ahead of time, each word vetted (the addition of “in conjunction with our great Russian Allies” being one of those political addendums). He had prepared a speech for failure as well, in case the onslaught had been so repulsed that it would have made military sense to get everyone the hell off those beaches and back to England to try and fight another day. History, written as it is by the victors, smiled on our side. But there is a soft, yet insistent tone in Ike’s speech which I find harkens to another era. The pleas to members of the underground to wait until they can be of maximum use, the apology for damage which is yet to come (the destruction of the town of St. Lo in July ’44 seems almost pre-ordained), all make for a combination of sincerity and, at the same time, a firm demand. Ike was 54 when D-Day took place. When you are older than the age of someone who did something astounding (organizing D-Day without a laptop, a desktop, or even a Palm or Blackberry?) it makes you think about what you do with your own time.

This morning, before meeting with the other judges of the photo bourse, I will play Ike’s message to Western Europe, and try to imagine what it must have been like to sit in a small living room, with a radio turned on loud enough to hear, but soft enough to go undetected to neighbors, in a building perhaps right next to my hotel this morning, on Avenue de la Motte Piquet, and wonder if I will be saved from Occupation by the man behind that far away voice. We’re just sayin… David
Posted by Iris&David at 1:02 AM

The problem these days is that I understand many universities are doing away with "wet" darkrooks..and I think that's a shame. I seriously do not think one can appreciate the photographic image, without seeing the image forming in the dev paper tray!

Have a safe trip.

Ya gotta look out for those sneaky darkrooks!

New address. Got the Jena Six "Black power" images on it also.

Side note to Walter: I teach wet darkrooks at the college level, and will teach two classes of classic B&W film 'Introduction to Photography' in the Spring. Classes are filling up, so if you want to enroll . . .

So David, can you slip an old fart like me a few Euros while you're at it? When I shoot color 8x10, it costs me around $15.00 per shot. OUCH! Made four exposures of one scene just yesterday.

So how does one sleep with an armored maniac on horse back pointing at YOU all night? Geez, that room is so, how we say, French!

I get my fingers quite wet in my bath (ahem) darkroom. But thank you for the invitation..