In addition to Moscato di Asti, I have a new favorite thing. I love cheese grits. But that’s not new. And I adore a good skirt steak, but that’s old news. This is not in the food or drink category except just a little bit. This will come as a big surprise, but I love cinnamon bun wax that you melt and it makes your house smell like an old fashioned bakery.

I did not buy this at a designer store, which sell oils scents for $12 a pop. No, no, not I. And I can’t take the credit for discovering it. A few weeks ago my cousins Rosalie and Honey came in to Boonton to see my mom and we decided to go to the Parsippany diner for lunch. Let me digress a bit. When I was growing up our parents did not share pertinent information about relevant topics like sex and getting your period. They were not comfortable with any discussion that involved body parts, except getting your hair and nails done. The task of ‘seldom mentioned’ gender specific, body parts was left to older cousins. In fact, like many families, we did not even use the proper names for these organs. (Forgive me if you are embarrassed by any of this. Just put on your big girl/boy panties and keep reading.) A vagina was called a moosh and a penis was referred to as a petulie. Imagine how we all felt when that similarly named perfume came to market. Do not ask me why. These ridiculous names to avoid reality, were simply passed down from generation to.... well one generation anyway. Here’s the good news, when things look bleak, it is impossible not to laugh or at the very least, smile when a someone asks anything about your moosh.

Back to Rosalie and Honey, who were my big sisters, guides, and educators. All my first cousins are about 3 to six years apart and our births were planned to coincide so that our mothers were never pregnant alone and we children always had a playmate. You may have read my blob about Steven Michael Kaufman. He and my cousin Eden (who lived in Newburgh NY) were my contemporaries. Rosalie, Honey and Shelly (who also lived in Newburgh and therefore not as accessible), are about six years older than I am. When they were kids they went to Pocono Highland camp, which meant I had to go to the same camp and it was sleep away. I was about five the first year and I hated it. It never occurred to me that camp was a choice. I thought you had to go to school in the winter, and camp in the summer. I cried so hard every night that there was nothing they could do to calm me except take me to the senior bunk where Honey and Rosalie were assigned. In those days, and despite my grim outlook on summer fun, I became a mascot for the big girls.

We were pretty close. I worshipped them and they tolerated me because I was cute and they could dress me up and I would do the hula. I can still hear them sing, “Here’s to Iris and the way she does the hula hop.” Obviously, things change over the years and we simply haven’t had the time, nor are we geographically located, to see one another with great frequency. So having lunch together was a big treat. After lunch we decided to go to AC Moore, my favorite place to buy a few ‘chatchkas’ (things you don’t need but can’t resist.) I decided it was time to crochet a new quilt and Rosalie decided it should be for her. So we bought wool. Then, on our way out Honey spied the wax and candles. “This stuff is terrific. It makes your house smell like whatever the wax is.” She was so excited that I got excited – kind of like the screaming thing but without the noise. 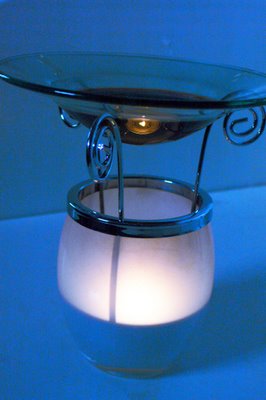 Cinnamon Bun in a Modern Glass


There were twenty fragrances. Some were surprisingly disgusting. Like you would expect the vanilla to be pleasant enough, but it’s just too sweet. This is not the case with the hot apple pie or, my personal favorite, cinnamon bun. They are so good that they actually make you hungry when you light them. Honey bought a big bag of candles, which we split, and some holders that are necessary for burning the fragrance. Rosalie bought the wool and the wax. I wanted to buy a glue gun but I couldn’t figure out what I would use it for, so I took a pass and got off awfully cheap. My lucky day on so many counts. I will confess that I later went to the Bath and Body Works shop and bought some elegant holders, but they were on a two-for-one sale.

Anyway, there are these little things that make me happy. There’s nothing that can compare to lighting a candle, drinking a glass of Moscato, maybe grilling a skirt steak and cuddling up with Jordan, whose face is still a little round (Tina says she should paint numbers on it and pretend she’s a clock) and David. Sometimes being happy is really so simple. We’re just sayin... Iris
Posted by Iris&David at 4:29 PM

There's nothing wrong with 'simple', as life is waaaay too hard,short and difficult..But at the NOLA Crowne Plaza Friday afternoon the unpleasant side came out of me when the clerk told me the reservation was cancelled, but then she realized this was in error..Oh, for the simple things..When you've family, you are the wealthiest person on the planet with all the warmth..THAT's "my" idea of the perfect global warming. Perhaps that starts at home..As an aside, I got down and low last night to shoot a street urchin, and some drunk revellers in the Quarter began shooting me with a vengance..so if you see a dude on the net with holgas and an F2 on Bourbon Street..that will probably be me tring to do my thing..Oh, for the simple things..

Yeah. Boys are such a pain in the ass...