You can't always figure out what will surprize you. I mean, that's why surprizes work. They kind of come out of the blue, and "surprize" you, and you usually feel better for it. Understanding that there are still things you don't know are going to happen creates a little extra juice in life. Makes it worth getting out of bed each morning to see what will have the joy be being one of that day's surprizes. People sometimes say they don't like to go through a day without learning something. That's how I feel about surprizes. I want to be astonished every day. And if it can be in a 'non-invasive' way, so much the better. At this point, sadly, there is no surprize in some idiot blowing up a market in Baghdad with a mini van, killing a bunch of people. There was a time when suicide bombers were one of those black surprizes. Of course we had kind of shelved "kamikaze" -- the divine wind -- which described the Japanese fighter pilots who flew their planes into American ships during World War II. We of the 'western' persuasion don't really understand suicide bombing. We can't believe that, at the core, there isn't something better to be gained by staying alive and trying a little harder. That, plus the George C.Scott "Patton" speech in which he implored his troops not to die for their country, but to make damn sure those German troops get to die for their country. Well, that wasn't surprizing, knowing what a hard-ass Patton was, and let's face it, when push comes to shove, you need hard-asses in charge.

That remains the great quandary, for me, about the current conflicts. I think that whatever our liabilities as a society,and there are plenty of down sides (info-mercials, overindulged eaters at CinnaBun, tax audits and the people who enjoy doing them... you get the idea), we still need to not only protect ourselves from those who would do us harm, but do it with real energetic force. That is why the Iraq war has become such a distressing situation. Whatever WAS the war on Terror, this isn't it; and having helped stoke the fires of the America haters by what we have done there, we've inflicted on them and ourselves, a terrible situation. Not a surprize, really but nothing you want to be happy about. 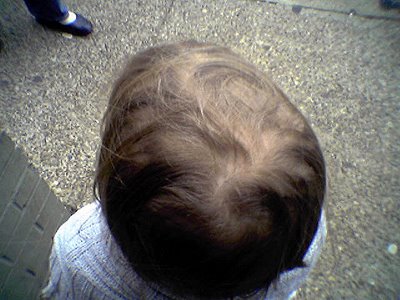 So this morning, imagine my wonderful astonishment when I discovered a new way of forecasting the weather. We had gone for our semi-usual Sunday morning dim-sum with Edwige and Chris - our adopted kids... She, the French beauty, was our au pair ten years ago (Iris calls them our "children by choice), and married Chris, a Yank from upstate New York, and they have two adorable kids, Adrienne (2) and Mateo (6 months). On the way out of Mark's (don't be later than 11am on Sunday, or you 'll have to wait) Chris started to remark that Adriennes hair - very static-y - was flying all over the place, and truly it was. Strands hovering hither and yon, the way those white styrofoam popcorn bits cling to blankets when you open a box from Amazon.com. Her wisps of hair were looking like Vietnamese leeches hanging from trees, bobbing up and down as a body (mine, as I remember it) walked by. Both Chris and Edwige noted at that moment that we will be getting snow. 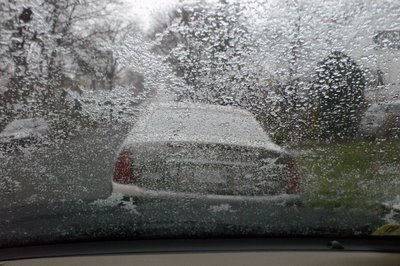 Icey crusts on the Volvo windshield

Snow? Snow? I asked? Yes, they said. When her hair is like that, snow is imminent. Right, I said, it sounds like something from Green Acres. Arnold Ziffel, the pig, would start snorting a certain way, and Fred, his owner, would divine what was going to happen on the weather front. Gimme a break, I thought. But I remembered how that hair looked as I walked off to the car. We drove home. Parked. Came inside. Twenty minutes later it started to snow. 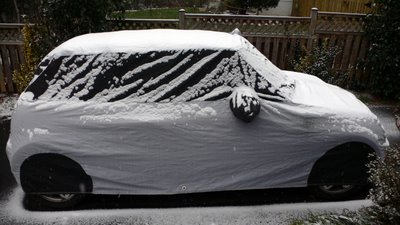 The beloved MINI in its weather glove

Topper Shut (Storm Central 9), Doug Hill (Storm Center 7), eat your hearts out. All I need to know is when Adriennes hair starts to fly like a mad scientist, grab your boots, salt the sidewalk, and shovel the walk. I know a surprize when I see one. We're just sayin....David
Posted by Iris&David at 10:14 PM

I hate the bad ones..but EVERYONE loves those 'good'surprizes! Is itnot wonderfully strange how they appear?