The Worst Pain of All

The worst thing a parent can go through is when their child is in trouble, or in pain and there’s nothing you can do about it. On Thursday Jordan had four impacted wisdom teeth extracted. Under the best of circumstances this is not an easy surgery. And under the best of circumstances, Jordan has a low tolerance for pain. I can hardly wait for her to suffer childbirth.

Her appointment was at 10 and at about 12:30 I became a bit concerned. When we went for our initial consultation, that’s where the doctor explains all the horrible consequences of the surgery, they said it would be about 20 minutes and about ½ hour to an hour in recovery. During the consultation, which was conducted initially by a dental technician who was so much like Jordan’s friend Steven, (who is a multi-talented gay Asian, musical prodigy), we could hardly keep a straight face—no pun intended, or maybe it was. When he got to the part about the possibility of paralyzing a part of her face by damaging a nerve or making a hole in her sinus, she was no longer amused. And when the doctor arrived she explained in a clearly Jordan fashion that she was a singer and this operation could have serious career consequences for her. So he took an additional 3D X-ray to see exactly where the teeth and the nerves were. Why in the world don’t they do that with everyone? Is it possible that they actually operate on anyone without knowing what’s going on inside? Why am I only partially surprised.

At 12:35 I enquired about Jordan’s condition and was told that she had been given an additional IV because she looked pale and they didn’t want her to faint. They said it would be another half hour. At 1:30 they took me back to an hysterical child who was frightened, in pain, and very pale. The nurse asked me if I had remembered to bring the drugs. What a question.

I parked in a bus zone and waited for them to bring her out in a wheelchair. Then I piled this little lump of Jordan into the car and took her home. We made a bed on the sofa so she could sleep comfortably sitting up and then it was time to change the gauze pads. She couldn’t open her mouth. Try as I might I couldn’t get them in and now she was crying and screaming about the pain. In order for her to hear me say, “maybe you should do it yourself,” (which I meant as a way to make it easier), I had to raise my voice. At which point she started to scream that I shouldn’t yell at her. Well, of course I wasn’t yelling at her I was just yelling, but it always appears to have the same impact. You know how when you hear someone scream it makes you scream and you don’t know why. I remember when we were in summer school in Glassboro NJ and Pam saw a peeping Tom in the window while she was taking a bath. She jumped out of the tub and came racing into my room naked, wet and screaming. Of course I didn’t know why she was screaming so I started to scream. We couldn’t seem to stop. Well this was pretty close. There we were yelling about the pain and both of us wanting to find a way to make it better.

When we finally calmed down, we managed to get the gauze in and thought that was it. But then it happened again an hour later so I thought tea bags would be easier. And they might have been if she hadn’t bitten into it and broken the tea bag. How could I not have realized that her mouth was numb and she didn’t even know where her teeth were located. And of course, you’re not allowed to spit. So she had to fill her mouth with water and let it dribble out. 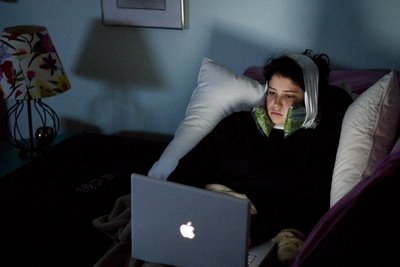 
We got past that crisis but the pain was so bad the nurse said (by now I had made three phone calls to the dental office) to give her another pill, which worked until she started to vomit an hour later. I guess that’s one way to rinse out your mouth and technically it’s not spitting. When she fell asleep at about 11:00 I found a small unoccupied space on the couch—children do know how to spread out – so I could be with her in case of another emergency.

Yesterday she was on her computer and it was pretty much without incident. She was uncomfortable but we kept applying ice bags and medication. Then at about 10 the pain was back. Another pill more ice packs and sleep until six this morning. She awoke with the swelling increase, the jaw bruised, her tongue numb, and the sockets all aching. We called the doctor who asked if it was her first surgery. I saw that as a way to dismiss us and then when we told him it was, he said it was all normal. Not in my definition.

So we’ll take all of this one hour at a time, with Jords feeling terrible, and I might add looking like a chipmonk. And we’re hoping that we’ve seen her through the worst of the crisis. But as I was lying in bed crying about the whole experience, I kept thinking, there must be something more I can to take the pain away, to make her better. After what we go through in childbirth why should be punished again by having to watch our children in pain and be powerless to help. If you have an answer please let me know. We’re just sayin...Iris
Posted by Iris&David at 1:02 PM

Yes this is NORMAL.

I had all 4 impacted wisdom teeth extracted at age 17.

It was done in the hospital, not the dentist office, back then 'cause the surgery wasn't as advanced as it is now.

I remember I was too long for the gurney. My feet hung off the end (David can explain). Two very pretty, young nurses arrived to take me to the OR. As I was wheel out of my room, my feet kept bouncing off the backside of the nurse taking the lead. As a 17-year old this was pretty cool stuff (I'm glad I'm a boy! Grin). Well the nurse started laughing about my feet and her bottom.

So I offered to pull my feet back. Then I did, the nurse looked back around at me. I was covered in only a sheet. She smiled and said "I wouldn't do that if I were you 'cause you're showing the world the family jewels."

I put my feet right back onto her bottom.

Anyway, when I got out of surgery there was no nice firm bottom for my feet. Just a mouth full of gauze and dried blood. My face ballooned to twice its width it seemed, and my brain was spinning.

There was no such thing as a 3d x-ray. The surgeons went in bind with their knowledge from Grosse anatomy of where the nerves and teeth "should" be.

We'll never know if they bagged a nerve preventing me from even singing again 'cause I never could sing before.

I was pale, with an IV drip in my arm. I was in pain. I felt like crap.

In a few days I could eat cottage cheese. I always hated cottage cheese up until then. Now I can eat it by the gallon. The swelling went down. The pain went way. And in a week I could even open my mouth all the way.

Fortunately we don't remember pain in the way that we can call it back up and feel it again. Unfortunately the same can be said for my feet not remembering how soft that nurse's bottom was. Grin!

Sadly..I have no concious memory of knicking any cute nurse in the bottom..but I say to all you to hang in there in such a situation..Moms and Dads really come in handy for this type of support..But you would THINK in this Star-Trekkish era we're alleged to be in, there'd be a better 'procedure'.