"Lucy and Ethel in Government?"

Tomorrow we’re going to Philadelphia. And while we’re there we will see our wonderful pal Joyce Kravitz. When we worked in the Clinton Administration Joyce was the political appointee who oversaw the Voice of America and Cuba Broadcasting. Working at VOA was, and I assume still is, like working at the UN without either the class or the niceties. To be honest it was a political pit. There was nothing that made any employee at broadcasting happy. Part of the problem was that they were, and still are government employees who happen to earn their living as journalists. But their pay check is from the government or an independent entity allocated funds by the US government. So there’s a lot of pretending about exactly what freedom of the press should mean. Anyway, when I asked Joyce to take the job I knew it would take a Herculean effort to keep peace, and possibly succeed, and if anyone could do it—she could. But professional competence was only part of my motive. I wanted to work with Joyce because quite simply, she has been my friend forever and she is great fun. 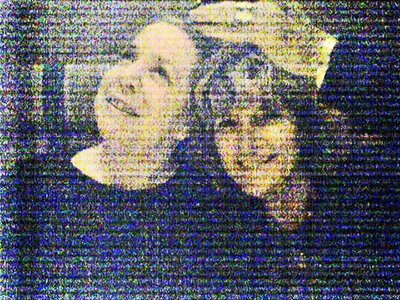 Lucy and Ethel (sorry, it was a CellFone cam, and not a very good one)


We called ourselves the Lucy and Ethel of the government and there were times when we might have been Fred and Ricky as well. For example, the job as Director of Cuba Broadcasting was open and we needed to hire someone. When I say ‘we’ it wasn’t exactly Joyce, Iris Lucy or Ethel. It was the entire Cuban American community—all of whom have different opinions—and all the Congressman who live in districts where more than 10 Cubans reside. This is mostly Florida and New Jersey but certainly not limited to those states exclusively.

We were met at the Miami Airport (which is like being in a third world country), by the head of the Cuban National Committee, Jorge Mas Canosa. He has since died but was the most ppolitically powerful Cuban in the US. Many people believed that Jorge was merely an elegant criminal who wanted to be the first President of Cuba when Castro died but I don’t think so. I think he was smarter and wanted to be the person who owned the telephone system when independence from Communism finally came.

We got into his limo which did have steel doors, and went to his office, where there was more than adequate security, he prepared coffee and a snack and he made suggestions about who we should hire. Because he wanted us to be thorough and accurate without wasting time, he actually set up our schedule. We knew we had to see everyone on his list and although we were determined not to be intimidated, we also knew that there were some battles were not worth fighting. Two ‘pishers’ from Washington just know some things. After all, what did we know about Cuba except that a good mojito could make any decision acceptable. In addition, Jorge invited us to his house and he made us paella. I mean, he made it himself. We’re so easy, but really how bad could a guy who makes a terrific paella actually be. So we got some sun, ate well, laughed non stop about the place and the politics and we made a compromise decision. That meant we picked the person (on the list of course), but he answered to Jorge. And that was OK because Cuba Broadcasting was such a problem that we knew no one would ever be in charge.

Joyce and I went to China to represent the US prior to the 1995 women’s conference in Beijing. We were there to decide whether or not the Chinese were capable of handling a conference of this size. They weren’t and we said so as did all the aides to the Secretary General of the UN. But somehow the decision was made to go to China. I often wonder who get paid off for that one. Anyway, the Chinese government officials couldn’t have been nicer or more plentiful. For example, when I asked how many volunteers there would be the director of the volunteer service said, 4 million.

They wined and dined us and treated us like royalty. Joyce didn’t like the regal part, she wanted to be “just plain folks” because royalty meant you had to eat what was offered at the banquets. The first night the appetizers included, among other delicacies, scorpions. And they weren’t sliced and diced. They were the whole black hairy animal—but dipped and deep fried. I was a bit taken aback but I thought Joyce was going to keel over. After dinner she told me that under no circumstances would she ever leave the hotel for a meal—not ever. “OK OK” I agreed reluctantly. I wasn’t going to eat scorpions but I figured there might be other interesting things. Anyway, the next night we ate in the hotel and they brought us some nice complementary appetizers. “And what is that?” Joyce asked the waiter about something unfamiliar. “Duck lips” he replied. So much for hotel fare.

There were many more trips and many more laughs. We traveled around the world trying to make friends for the US, and trying not to make trouble. Most of the time we succeeded. Our boss begged us not to inspire an international incident and I don’t think we had one on our watch, but we can’t be sure because we weren’t around after we left. I’ll check with Joyce when I see her. We’re just sayin...
Posted by Iris&David at 4:56 PM