There I was, holding the phone away from my ear and thinking; what an idiot.
Briefly,when my mother left the rehab center they gave (and I use the word without actually meaning for free), her a wheelchair, a walker and some bathroom contraption. It was delivered to her house by a nice woman who, after 40 minutes, realized that the walker was broken and the wheelchair had two left feet. If a person has two left feet it means they are clumsy, if a wheelchair has two left feet it means it’s useless. In addition, it was not what we had requested. What we wanted was a ‘transport chair’—it scares me that I have become conversant in medical equipment conversation. A regular wheel chair weighs ten pounds more than the transport and it is impossible to move it around, especially in and out of the car. So we journeyed to Lake Medical Supply in Denville.

Carmen, our sales guy, and I think the owner, couldn’t have been nicer. He was helpful in his explanations about Medicare rules and how the government works. Having worked in the government I already knew it doesn’t work, but that’s a different blob when I’m in a better mood. And by the way, we got a $48,000 bill for my mother’s 6 day stay in the hospital where they gave her no care and screwed her up so badly she had to be in rehab for 10 days to recover. Talk about something for nothing, or versa vice, (I know it’s backward but so is the system.)

Anyway, Carmen was just lovely until our first phone call where he was condescending, arrogant and rude. “He’s having a bad day”, I thought. He wasn’t, but I didn’t know this until our second telephone conversation, where he, and I am being so kind (yes, I know it’s not like me to be generous), behaved badly. Which brings us to the point where I began, holding the phone away from my ear. I needed to do this or I would have really let loose. But the decision not to blast him was calculated. I could drive back to NJ, take the chair and tell him where to put it. Or I could ignore his attitude, be happy my mother was happy with her $200 piece of crap transport, and hang up angry -- but without having to travel.

But the chair is not what I wanted to blob about. 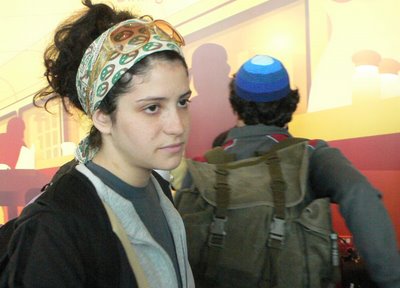 At JFK this morning in the wee hours

This morning we left for Kennedy airport at 5:20am. Jordan is back from Israel. Although she says it was a life changing experience it’s hard to tell since she can hardly keep her eyes open. Jordan always being the last out of anywhere, except for her father and Bill Clinton, was nearly the last of her group of a 100 because she was waiting for her friends. 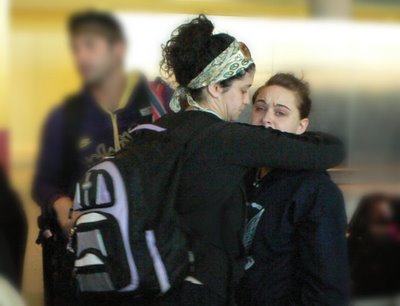 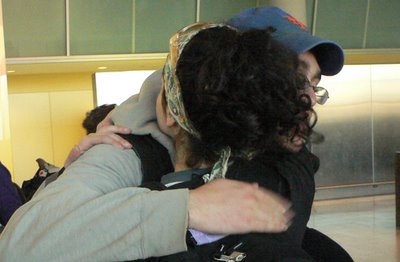 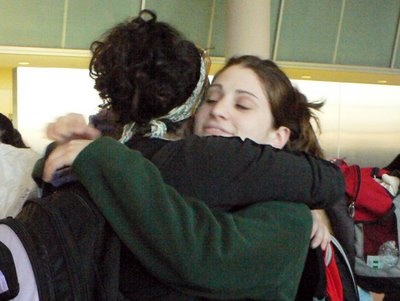 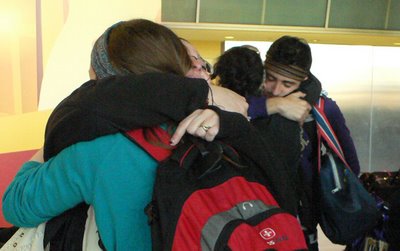 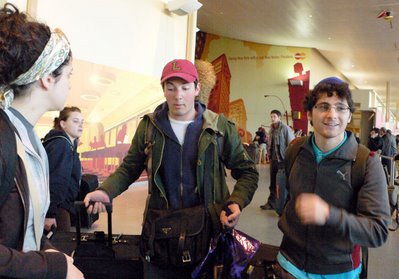 Goodbye to Scott and Jordan

Jordan has the ability to form deep and sometimes lasting relationships. So, whether it’s a show or camp or a trip, when it’s over there is always a difficult parting and she suffers separation anxiety. This is not something with which I am familiar because I never separate from the people I love. Although there may be temporary absences, I am still very much in touch with friends from nursery school, high school and college. The concept of shalom is better works far better for me than goodbye. And this is not easy. In this mobile and transitory time, it is hard work to keep track of where everyone you want to see has gone. And it takes time, sometimes money, to keep and stay connected. While there are ways to do it; phone calls, which I prefer to e-mail but that’s not the reality. Notes or cards, but I don’t send ‘e cards’ because they are too impersonal. And the infrequent often impossible, but important visits. But anything worth having is worth working for, and friendship is right at the top of the list. 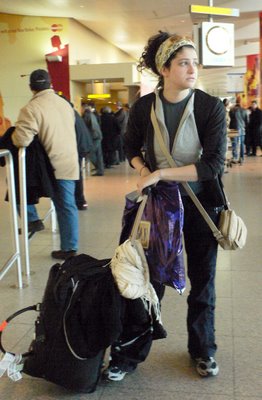 Back from a great trip

It would be great to be around to see if my kids have learned (from me) about the care and feeding of friends. When you are young you take for granted that your friends will be there regardless of any care or feeding, but it’s not true. There’s a Jane Olivor song where she sings about finding “The Right Garden” to grow in. But part of that is where you are nourished by water, sun and, of course, the fertilizer. While I don’t like to think of myself as poop, I don’t mind the description if it is with regard to helping sustain a friendship. And if I might make a suggestion, (you know you can’t stop me). Instead of sending an e-mail with some sentiment about how precious friendship is, pick up the phone, make a call, and take special care of the friends on the other end of the line. We’re just sayin...Iris
Posted by Iris&David at 4:35 PM

Well good to go through your post... its nice... i do feel that one should always be passionate about keeping in touch with good friends... well i like your telephone idea anyways... and good are the photos too that u have uploaded ....do drop by My blog sometime .... hope u will find it interesting...!!!

Geez..I can identify with the hospital bill for basically nothing! Detailed billing showing a $15.00 Tylenol,etc.,and inapropriate care..And they wonder why people go balistic over so-called 'healthcare.' And, yes..you are right on the mark with the phone calling to keep in touch. As an aside, I visited My blog, and find it interesting..'almost' appears to be a regular web site!I am in receipt of my OT catalogue. My wife,Debbie, is kinda liking the idea. Cheers!