“The Admiral is a very good friend of our.” We told the woman behind the desk at the American Airlines Club. “And he wants us to have extra special treatment”.

“Of course.” she replied, trying not to laugh. “Here are complimentary beverage tickets he wanted you to have.” 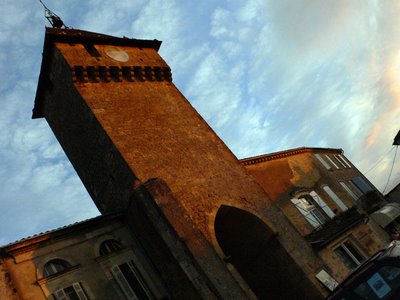 the bell tower in St. Macaire

Thus was the beginning of our trip to France and Italy – which started a few days ago. Actually, the trip began when we left the apartment and headed to JFK embarrassing early, but so what. We were on vacation and determined to relax. No leaving just enough time, shlepping our bags and racing to the airport in rush hour traffic.

Soozie MacNelly and I have been friends for about 40 years and when I suggested she come to Europe with us, because David would be working some and I would be bored, she agreed to make the trip. We always have a great time together. In 40 years we have never even had a quarrel, so we were truly excited about what was to come. We had been at the airport club for about two hours when we heard the announcement that the gate had been changed and we were leaving from terminal 9 instead of eight. We were assured that it was not far and we would be only slightly inconvenienced—after all we were extremely special friends of the Admiral’s. We wandered over to terminal 9 and found out that there was another Admirals Club after we passed through security, so off we went to reestablish the connection. About ½ hour before the flight we made our way to the new gate only to find out there were equipment problems and we would be delayed or, as the gate agent confessed, “Worst case scenario is we will cancel that flight and rebook you.” We were traveling on free business class tickets so you can only imagine when we would have been rebooked – maybe sometime in the spring. “What’s the problem?” I asked never expecting an answer. “The toilets in the back aren’t working. If one or two of them were working we would fly but none of them are and besides, they’re trying to flush them out or they will have to replace a pump… and on and on. TMI, Jordan would say. Too Much Information!

We retraced our steps back to the Club and saw our flight on the board. Our spirits were dampened but not rained out. The gate agent had also admitted that this delay was a rolling delay. That means they keep rolling back the departure time. We decided to watch the news and were just in time to hear George Allen’s response to finding out he was Jewish. He accused the opposition of “casting aspersions” about his background. What kind of moron says, during a campaign and in public, that being Jewish is casting aspersions. Maybe it’s me but if I were running in a close Senate race I might embrace the idea of such ethnicity. But as I said, he is a moron and clearly either he’s running his own campaign or he’s only hiring people of like mind—or in this case, no mind. My only hope is that the Democrats don’t pile on and people start feeling sorry for him. Anyway, we had a tremendous laugh, got back in a good mood, and broke open the sandwich we had purchased that morning at Whole Foods. 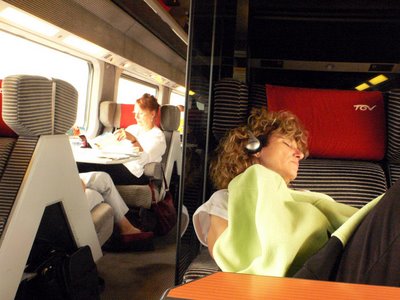 When we were one and a half hours late the flight was called and we returned to the gate in what appeared to be, just enough time to board. It was a great flight which we mostly slept through and arrived in Paris in enough time to meet David and catch a cab to the train station for our trek to Bordeaux. 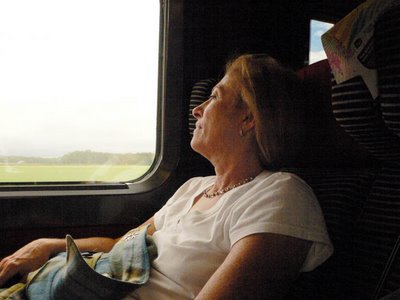 Soozie on the TGV ("train a Grande Vitesse")

Did you ever notice that when you ask people, who are not French, why the French do things in a certain way, they always say, ‘because it’s France’. Having been in transit for quite some time Soozie and I decided to hit the lieu before we boarded the train. We found the ‘toilette’ sign and started to walk. Much to our surprise, when we arrived at the destination, there were three toilets that cost about 50 cents to use. But of course, we had no Euro coins so relief was not in our immediate future. We found David at the ticket machine unable to purchase tickets because you can’t purchase certain tickets in the machines in France. 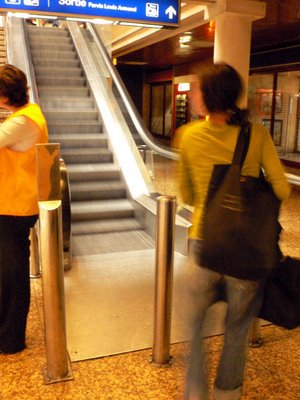 At Bordeaux station: "No Furniture Gets Past This Barrier!"
I don’t mean to pick on the French, because they do some things very well, but there are so many rules having to do with etiquette and time, sometimes the just plain silliness seems overwhelming. Nevertheless, he went to a window and got the tickets, ran to Paul’s fast food for some sandwiches, and we boarded the train. We paid for first class tickets because, as senior citizens, we went half price, and the train is sensational. (One of the things the French do well). As old people, it is not easy to board a train with loads of luggage but we managed and decided to forgo any sightseeing and catch another nap. 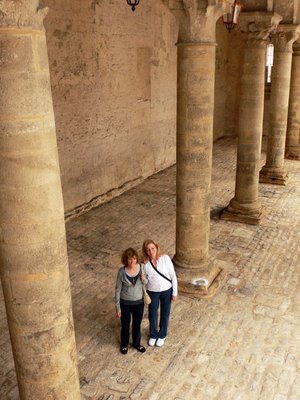 In the category of “because it’s France,” we gathered our luggage and tried to get up the escalator but it was not easy to negotiate past them because there are barricades that prevent you from manipulating easily. “What do you think those are those for?” Soozie asked me. Not having any idea why there would be barricades in a train station where millions of people might be dragging large suitcases, I said, “Probably to prevent people from stealing the furniture.”

We had a coffee, located the designated photo helper, and started our journey to St. Macaire.
Posted by Iris&David at 12:39 AM

Grand adventures are in the story details.

David, do not let the girls hog the show. We need God Light illuminating the trip.