There Was a Wedding

I thought I’d take a minute to write an addendum to “Four Funerals and No Wedding”.
There was a wedding, and in trying to be clever and entertaining, I inadvertently overlooked it.

During the Gore campaign when a few of us were trying to find a way to explain to the crack Gore strategists that they were taking the wrong road, moving in the wrong direction, and quite simply, making really stupid decisions with regard to women, I met my friend Kat and her then beau Bill. You may remember that was the campaign when Gore’s daughter suggested they hire a consultant to change his look and make him more of an Alpha male. You may remember that decision because it turned the campaign from actually moving on the right track to coming to a dead stop. (What’s with me and the transportation analogies?) Up until that point, Gore was using self-deprecating humor, spending road time with Tipper, and actually being a pretty accessible guy. Once he became an Alpha Male and changed the color of his clothes (some consultants have nothing to say but they want to get paid big bucks and have access to the power so they make things up), he became a well dressed, still stiff but without humor, smartest kid in the class and no room could stand him, nor would they vote for him.

I should say right up front, I love the Gores. They are very very nice people. He is the smartest kid in the class but he doesn’t usually shove it down anyone’s throat. He is funny and charming and cares about people, the environment, and the future. Tipper is a joy. She took a great deal of heat for a insisting on labeling lyrics on albums. But as a concerned parent, she was right. Her campaign never impinged on freedom of speech—just the freedom to let kids avoid letting their parents know they were listening to violent obscenities in the music they had firmly attached to their heads.

Anyway, a few well known female activists got together to discuss how we could help set things right in terms of organization, issues, and rhetoric. We all believed that women needn’t be marginalized but targeting them with just social issues and those concerning health and education. We insisted that women were also interested in boy things like war and the economy and business. It was hard to get that message to anyone in the campaign who would listen. It was harder to find anyone in the campaign who agreed and knew how to get it to anyone in the Gore campaign who could make anything happen. So we had our own meetings and offered our help but nothing ever came of it except we were right and they lost the election. And I don’t want to hear that we won the election. George Bush was sitting in the White house on January 21st and the democrats were cleaning out their desks. Nothing made me sadder, no angrier, then when we went to the Gore’s final family and close friends Christmas party and people were still insisting that he won. “GET OVER IT!” I said over and over. “In case you hadn’t noticed, we are not setting up transition offices.” 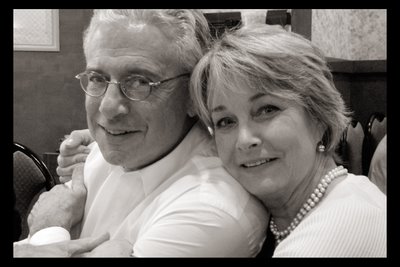 Bill and Kat at a recent moment

Kat was in that group of women. She had been married to a Congressman, then moved to LA as a writer, had really good political gut and somehow found her way to us ... the most knowledgeable well kept secret in the 2000 campaign. Kat and Bill both had children from a previous marriage and were waiting until the right moment to reattach. That happened two years ago. They have been through some pretty rough times, both having had cancer and surgeries, and family problems, but they remain connected and alive. I like that part the best. So as an addendum to my blob of about August 13 – I think our 100th blob, I just wanted to say, the wedding was beautiful, loving and joyful, as are Kat and Bill and I’m sure glad they are part of the addendum not a part of the original blob. We’re Just sayin...
Posted by Iris&David at 11:19 AM

I just stumbled upon your blog; it's very enjoyable, and I particularly appreciate your insights re: the Gore campaign.

You're not alone in your frustrations. I was deeply involved in Democratic and progressive non-profit politics from '87 through '04. What's sad is that, in many ways, your tale about the Gores was repeated in '04. Furthermore, I had similar frustrating "talk to a wall" experiences with Democratic offices up and down the ladder prior to our ouster from the House in '94.

This keeps happening, because there simply are endemic problems in our party and movement: a retread approach to candidates and the consultants who cloak their best qualitites, a bloated bureaucracy among our interest groups, a lack of creative recruitment, and so much more.

It all adds up to a situation wherein we simply have trouble talking with main street, even when they're desperate to hear a new idea.

It was interesting to be an operative with a passion for photography: I feel that I constantly picked up nuances and emotions that so many candidates and consultants never noticed.

I'm glad your friends are still connected to one another, through the tribulations. They learned from the tests of life. I only wish our party were as wise.