The reason for my trip to France was two fold. One was to be the President of a Jury which was awarding a €15000-20000 bourse to a young photographer who is pursuing an idea of work which requires an element of time/money to accomplish. In this day and age, which is to say, one in which traditional magazines no longer provide the means which they used to, photographers need to find alternative sources of funding to follow stories which they feel strongly about. In this case, about 30 photographers were cut down to six, and those six were interviewed by our panel of 6 to decide who should get this year’s prize. It is always fun to figure out a way to get to Paris, but this year, following on the heels of my China trip, it was very a compacted time frame: I had a day in the city of light, and much of it sleeping to recover from the China Trip. We met with our group of editors, and for the first time ever, I was involved in a process where the photogs themselves had to come in and speak, in a manner not unlike college “oral exams”, with the judges, face to face. It was quite wonderful, and even though my French is pretty good, it was a challenge to keep up with some of the ideas. Now and then I had to ask what a particular word meant, but in the end, we all agreed on who the winner should be, and happily, gave an additional prize to a young woman whose inventiveness really struck a chord with us. This was all a run-up to the next portion of the trip which was to pick up Iris and her college pal Sue Macnelly at Roissy (charlesdegaulle Airport) and head to Bordeaux where I was attending a photo show (of mine) and speaking to an audience about my show there. I left the hotel early and walked to the airport bus, a very easy way to get to CDG, and waiting an hour or so for the girls to arrive. They were on a flight which was slowed down by tech difficulties, but which arrived in time to get us all downtown to the train, and take the train (yes! Senior discount tickets!) to Bordeaux.

We were staying for a couple of nights at a cute little hotel in St Macaire ( Saint My-Cairo?) just outside of Langon, about 40 km from Bordeaux proper. 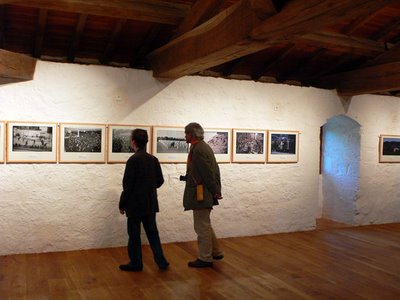 Pictures at the Mill

We spent a day visiting the ingeniously designed photo exhibits: they are being shown in old chateaux, olds mills, and other medieval ruined buildings, which really gives a wonderful sense of time to whatever is in the pictures. My show was in a centuries old Mill in the country, beautifully shown ,and a place I would be happy to exhibit in anytime. 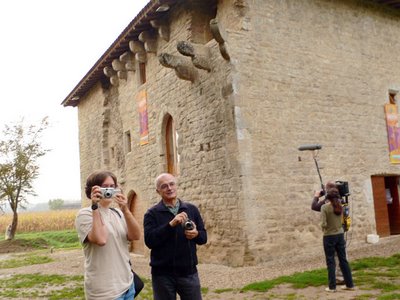 Me, as the subject of adoration...

I did a live “internet-TV” interview, dazzling them with my precise (and, frankly, badly accented French) descriptions of just how I arrived at taking this or that picture. Then it was back to Bordeaux for a day with Jean-Pierre and Barbara, our friends who decamped 6 years ago from Paris. They showed us the city which is, quite amazingly, gorgeously cleaned old stone, and which has, we’re told, the largest percentage of stone buildings in all of Europe for a city this size. We walked along the quai market – wonderful fresh produce and other foods, including a first rate chicken truck, one which Iris would have been happy to hop aboard and drive off in. Then, a great lunch at a very typical bistro, where the waiter fell into the “cute enough to take home to Jordan” category; then a nap, and a dinner out at a jazz club; we seem to have started eating again with abandon. And speaking of abandon, the woman at the table next to us at dinner was.. well.. I think surprised at the very least, by our presence. 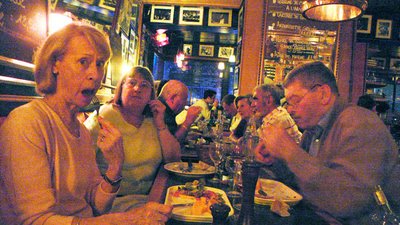 Mid-fork: ok, it's tacky, but it's what we do!
I know its kind of tacky to grab someone mid-fork, but after all those “you know, that really isn’t DONE in France” looks, you sometimes just grab the camera, snap it once or twice, and move on to the next socially iffy situation.

The following morning, Monday, we began the schlepping part of the trip by dragging our roller bags about ten blocks in search of a taxi, a tram, anything which would get us to the train station where Avis was waiting with a red Citroen van – a Picasso model. No cabs were evident, and as we walked towards the tram, tempers failing under the heat of the day, a lone single taxi arrived just in time to save us from our own annoyances. We got the car, soon named him Pablo, after his namesake, and hit the road for Provence. Land of Eggplant, Garlic and Aioli.

Thus, we decided to make a run for Provence, with a mid day stop for lunch at Carcassone, a 12th century town with its enormous walls still in perfect state, as is the moat, and which caters, sadly for us, to thousands of day tourists each day. And we mean Day. They pretty much know they ‘ll never see you again, so when the Gallic rules are enforced, they are done so with a sense of permanence as they will surely be there again tomorrow to smack them up agin the next wave of day touros. In Australia they used to refer to Touros as Seagulls. Why Seagulls? Well, they fly in, shit on your head, and fly out again. Yeah, I can see the similarities. Well, ok, I can see how Day Touros might affect your view of mankind, but we had a couple of unpleasant moments in our brief stay. Each place we tried for lunch was packed with Brits, Germans, Danes, Japanese, and a host of other touros, most of the Senior variety (you think they got discounts to do their drop by??) Finally we went upstairs at a place serving overdone chicken quarters over soggy fries, waited 20 minutes to get even a hello, decided the Force was NOT with us, and got up to leave. The huffy waitress looked at me like I had scarred the Mona Lisa with a Sharpie, asking me, in huffy French.. “so.. you wanna eat right away??” And before I could respond she gave me one of those Gallic (sorry French friends, but she wasn’t Belgian or Swedish… what Is, IS) stares full of vitriol (see, it’s a better word in French than in English).. and asked me “What is your country of origin??” Before I could respond “Russian with a little Irish and Polish thrown in..” she starts throwing at me “ German? Italian? Spanish?” 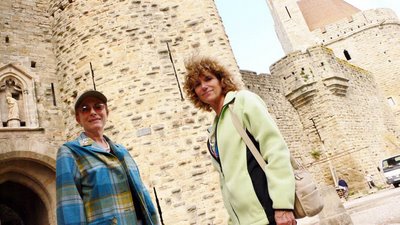 So, what IS your Country of origin?
Only later when I realized how annoyed I was did I think of the retort “… if I’d known you were cooking for the Gestapo I wouldn’t have come inside in the first place!” But, we only think of these things after the fact. I guess that’s what separates Ali G from the rest of us. Onwards to Provence… We’re just sayin. David
Posted by Iris&David at 4:37 AM

Spot on with this write-up, I truly think this site needs a great deal
more attention. I?ll probably be back again tto read more, thanks for
thhe information!

How to make a passport size photo ? Using your favorite image-editing software,
open the file, change the canvas size of the image and then print it.
Remember, there are a lot of guidelines other than just size that a
passport photo must meet as demanded by the government.
Size of the head, for example, is of key importance.
The length from the bottom of the chin to the top of the head must be of a specific size.
No shadows behind the person's head and even lighting
are things, that if not met, will get your passport declined.
Considering the time and effort involved in getting a shot to meet government guidelines,
it's far easier and cheaper to spend the $20 and just have someone take your photo.

I'm so happy to read this. This is the type of manual that needs to be given and
not the accidental misinformation that's at the other blogs.
Appreciate your sharing this greatest doc.

I think this is among the most vital information for me.
And i am glad reading your article. But wanna remark on few general
things, The web site style is ideal, the articles is really excellent : D.

Hello there, just became alert to your blog
through Google, and found that it's really informative.
I'm going to watch out for brussels. I will appreciate if you continue this in future.
Numerous people will be benefited from your writing.
Cheers!