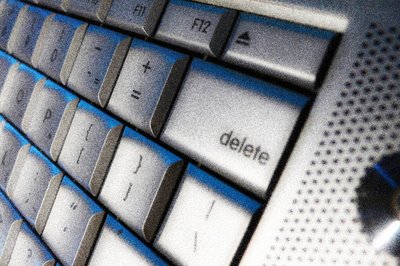 Everyone who has ever used a personal computer, and that includes a lot of us by now, has learned the hard way that the Save command can be your friend. When you inadvertently forget to Save your work, and there is a crash or a power outage, everything you've done to that point is at risk of being lost. Who knows how many great novels have been lost to history because someone kicked a powerstrip at a critical juncture? So as we have become used to this kind of 'save as you go' behaviour, another element of data collection has of late caused both Iris and I to think about our rolodexes. You know what a rolodex is... a "rolling index" of cards which list those people you need to keep track of for business, home, and Life in general. We all have our own versions of a Rolodex: Iris uses the PalmDesktop software, which is pretty good. I use a program (no longer sold) called iData, and which let's you blather on in a freefrom style, adding all kinds of little extra information that might be hard to put into a field by field "data base."

I like to add all kinds of minutia to the entries I make about the people and companies that I keep track of. Kind of like my brain. Full of the unordered crapola which add color and texture and, most importantly, the best HELP lines to get things fixed when my printer dies. But buried in that electrolodex is something very personal.

My file has over four thousand names in it. Now I don't think I really KNOW four thousand people, but between friends, family, and annoying telephone companies, the list has grown over the twenty years I have kept it. What doesn't happen exactly is that, well, it doesn't shrink much. It just keeps growing. One of the reasons for that it that I never delete anyone. In a way, I suppose, my rolodex is kind of a scrapbook of my life. The people I've met. The places I've been, the travel agents I've dealt with. The help desks which haven't been much help. But I have found that even when there are changes in life, it's sometimes hard to match those changes to my rolodex.

I have perhaps a couple of dozen friends whose phone numbers are in the 'dex, but who I won't be able to call. It's not because the phone lines are out, or the numbers are out of date. It's because they have died. I have never really dealt very well with the death of friends. I think my folks, like almost everyone's parents in the 50s, tended to spare us the details of death and dying. I remember a cold December day in 1956, riding around in one of our big Desotos, just a few days after my grandmother had died. I was ten. Driving across town, my mother and uncle Barney were talking about a lot of names who I knew to be their friends, but didn't know very well personally. After a while, I asked ".. are you planning a party?" "No," mom said, "we're trying to figure out who is coming to grandma's funeral.
'
Whom ever else was in that list, it didn't include my brother ( then 13), my younger sister, nor myself. We were kept at home, away from death, away from saying goodbye, away from the ritual of loss which funerals represent. I often think of the irony in the fact that in my 40 years of taking pictures, I have attended far more funerals of people I don't know, in dozens of countries abroad, than in my own family as a child in Salt Lake. Funerals remained that distant unmentioned thing that happened when people stopped coming for dinner, or stopped calling, or, no longer were there, like my Uncle Max was, with a roll of cherry Lifesavers always at the ready to sweeten a moment. His funeral, when I was a Junior in college, was the first in my family I attended.

So I guess it shouldn't come as any surprize that when friends and acquaintances pass on, I find it rather difficult to just remove them from my life. Somewhere, I think, is a little place where the memories of those friends will stay, and as I get older, I want to disturb that place less and less. And since I'm not quite sure where that place actually is, I suppose that keeping a name, phonenumber, address, and maybe some quirky comment on my laptop rolodex will help keep it going. There is a kind of finality to the [DELETE] button which I don't feel like confronting. In my heart I know nothing about my laptop will keep those friends closer than what is already in my head and heart. But I'd rather take my chances, and have one of those little buzzy memory filled moments as I flip through the [ENTER] key searching for a name, and on the way find Katherine, or Penn, or Mark, or Carl, or Jeff, or Catherine, or Sophie, or Helene, or David. We're just sayin. David
Posted by Iris&David at 9:53 PM

Although there is that Higher Power that has the ultimate "Delete" key on all of us at some point..I personally see nothing wrong with hanging on to those close to us in ANY way. Keeping their memory alive, in some respects, keeps us alive..but I only speak for myself.Walter B

I do delete, but it makes me feel as if I'm personally killing that person. Very sad.