It doesn't take that long to get to Chinatown. Just hop on the 6 train, ride it to Canal, jump off, dodge the sidewalk hawkers,and in minutes you're at Great New York Noodle Town for a great meal. Well, there is that OTHER way of getting to Chinatown. I did that one last night. Or, yesterday. Or, was it two days ago. Kind of like, the day never ended. I skipped the 6 train, and went straight to Newark, hoped on Continental #89, and 13 1/2 hours later (that is NOT a misprint) my swollen ass arrived in Beijing. It wasn't uneventful. I had an aisle seat next to a 60ish Chinese couple who lacked even the most elemental travel skills (I wondered how they had gotten to NY in the first place? One of those beached pirate ships in Baja?) I had to show them how to buckle the seat belt. You know, you can't imagine there are folks who dont know how to buckle a seat belt, but it does happen. 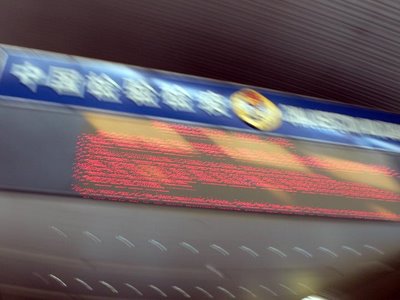 what it Forbids: No Eggs, No Used Clothes, No Live Animals, No Raw Hides (geez how do you have fun in this place?)
They were nice, country folk - the kind of people that if you were hit by a flood, even if they didn't know you, they would come over and help you bail out the basement, because that is what people do. 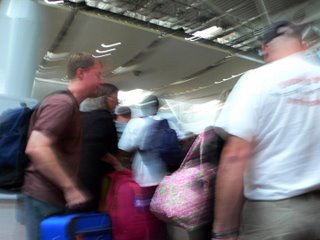 Quick, over here, lane 37!!
On the way down, she had trouble clearing her ears, and I had the damnedest time trying to explain how to yawn in pictograms and live action demos. About 4 hours into the flight, over Greenland (the non stop is a polar route, you pretend you are an ICBM, and take that route) some kid literally flipped out, and a Marshal (?) and two other beefy guys, a la light 93, took the guy down, restrained him with plastic cuffs - and did the whole deal, to keep him quiet in the back of the plane.

...and make that a Decaf Tripeo Mochaccino, extra whipped, double soy...
It put a little edge on the flight, but I felt great about it, knowing that if the shit hit the fan, there would be people who would act and not just cringe. I asked the beefy guy when I figured out something was up (I had my earfones on and missed the first few seconds of the wresting match), he signaled "OK" with his eye brows - a language I speak fluently - and we kept flying on. The idea of setting down in Godblom Greenland wasn't appealing to anyone, so on to Beijing we went, with Divinci Code on the miniature TV 4 times. Enough already with the Opus Dei! 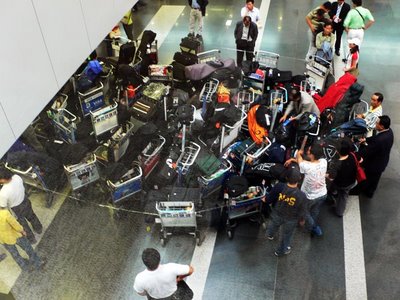 a corner of the airport known as 'Baggage Hell'
Then it gets fun. Off the plane, racing along head to head with other passengers, past the warning signs, into a line, which keep changing as they add and subtract agents, then baggage, and in my case, good luck to actually see "Kathy" the young woman sent to find me in the crowd. The first thing you see as the exit doors open from customs is a Starbucks sign. For a minute I thought I was back in Arlington, fighting the low-lifes for an outside table, but when you see the hundreds of folks waiting, many with signs, you KNOW you're not in Waverly Hills anymore, Toto. 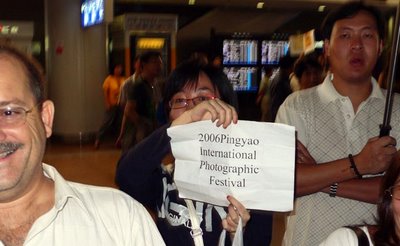 finally, after hundreds of signs for Mr Takimoto, I see one for Me!

I made it to the Internet cafe: real coffee & tea.. cheap internet, and caught up with my mail, waiting for the Night Flight to TaiYuan (sounds like a St Exupery title, no?) Onwards to Pingyao: at this point its 6pm china time, 6am Boonton time, and I have been up 23 hours, each and everyone one of which has been noteworthy. Now, to find my backs and head to the domestic terminal. More later from the Sino Epic which is now unfolding.. (editors note: an Indian guy sitting next to me asked me twice if the porcini in his soup could really be a mushroom and not pork. 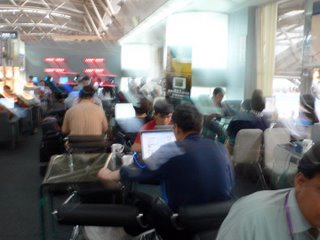 for a couple of bucks, tea, wireless and porcinis
I told him twice, it was a mushroom.. .not to worry. Even though porcinis look a little like B grade pork roast, he finally settled into his soup.) A good meal, indeed. We're just sayin.. David
Posted by Iris&David at 6:09 AM

Glad you made it to the land of discounts without plastic around your wrists.

Yeah, me too.And, glad to see you weren't in the center of a hijacking. But then again..I'll bet you were the only photoJ on the plane!