I'm sittin' in 10C, a seat on the 4:30 Vamoose from New York to DC on a Sunday evening, attempting to beat tonight's snowstorm home. Vamoose is one of the many bus lines which has discovered that in the age of "cheap" air travel there is still an enormous market for "really cheap" bus runs. The last minute fare for a DC-NY shuttle flight is way over two hundred bucks, one way, and even the vaunted Amtrak service has become injuriously priced. The fast Acela is often over $200, and the slower, less groovy trains are usually in the $100 range but can be half again that much at crunch times. Like the airlines, the train has become subject to willow-in-the-wind-like market responses. As soon as the internet traffic starts to show a lot of people are interested in a train, the price goes up, up, up. Even with my 15% Senior discount, its the price of a good meal to get home. On the bus, and there are a variety of them now available, the fares are usually in the twenty dollar range -- a big lunch for two at Chipotle, let's say. Quarters tend to be a bit cramped, and if the foreign student in front of you leans back into your lap to do his sudoku puzzle, getting to the john can be a challenge. But not as interesting as being IN the john, while the bus is hailing along at full speed. There is a cartoon warning in the toilet, rather like one of those IKEA furniture instructions, advising you (guys, that is) NOT to stand and pee, but to sit, like the girls. The thing is, and I'm sure every "sure, I put the seat up" guy would agree with me, sitting like the girls must is no bargain. The guys (standing) on that bus couldn't hit a toilet bowl at two paces, let alone standing next to it in an oscillating bus, careening along the Turnpike. It's kind of a mess, and Ladies, let me apologize for all the louts who have made the bus toilet such an unpleasant experience. I know it doesn't really make it better, but it's all I can offer. [Editor's note: Bring your OWN toilet paper. You have been warned.]

Decades ago, on my first trip to west Africa, I was waiting for the bus/truck (it looked like a truck, but acted like a bus) to head north to Mopti (in Mali.) I got to the bus station square early so I could pay my extra "colonial" fee, and sit next to the driver, and thus not bounce around in the back of the truck. But given the inevitable departure delays, I eventually had to relieve myself. I wandered over to a long, waist-high cinder block wall where I had seen Malien man flock, and tried to become one with my host country. The problem was simple. The men were all wearing a galabayha (sp.) - a long and somewhat fluffy ankle length gown meant to protect one from the sun, and hang loosely enough that you could just grab it up if you had to mount a horse, or.... have a slash (a British expression.) The men I watched all grabbed their gowns, knelt down below the cinderblock wall, and peed into the little decades old trough. They were out of view of the passing market throngs. Trying not to stand out, I too tried kneeling. But, and this is important, if you are wearing jeans or some other trouser style clothing, and are not endowed like John Holmes, you are in trouble. There is just too much distance and too many curves involved to get a clear shot. I kept trying to figure out for several minutes how I might accomplish this. Readjust the zipper. Slide the jeans down my hips a few inches. Pull my u-trou up a bit. Nothing worked. Finally, a man who I can only imagine was the sage Chief Justice of the Mali Supreme Court, who just happened to be walking by and noticed my feeble attempts at blending in, said "You may just stand..." I stood, and commenced to relieve myself (by now it was not a question of waiting on niceties), in full view of downtown Bamako, as streams of women shoppers and male merchants passed by the other side of the wall. It was kind of like the Delaware rest stop, except all the people at the rest stop were staring at me. Sometimes life, even in these confusing times, is boiled down to the simplest elements. Some day I plan to ask an 18th century historian what our ancestors used before the invention of Charmin and the flush toilet. But that's a different blob.

The simplest of things remain, however, the key to happiness in life, I am convinced. (Technically speaking, winning this week's 212 million dollar MegaMillions Lotto would be a simple act, one I could deal with.) Two weeks ago in the Dallas airport, in between flights, I went to grab a (decaf) coffee at one of those Starbucks look-alike places. I think this one was called Texas Coffee, and when I approached, a sole worker lay in wait for me. I asked for a coffee, "leave room for milk", and proceeded to pay him. His name tag revealed a name that, from years of parking in DC garages, I knew was Ethiopian. I asked him how long he'd been in Texas, and as I started to take a wiff of the pure Arabica beans, I was transported to a night thirty years ago, when I'd been driving through the north of Ethiopia near the Eritrean border. We'd tried to drive east to Barentu, my colleagues from the Eritrean Liberation Front, reporter Dean Brelis, and myself. Into the night, the recent rains had stopped us cold, truck wheels stuck in the newly created mud flats, and finally after several hours, we turned back to where we'd begun the trip. About midnight we got out of the truck and lay down on the grassy hill, next to a small fire. A young boy, no more than 7 or 8 was tending the fire, and charged with making tea in a small fist sized tea pot. His fingers became a blur as he poured water, put in the leaves and sugar, and added some freshly cut bits of ginger. He stewed the pot on the flames for a short while, then poured the rich tea into a shot glass, then back into the pot. He repeated this several times, mixing the elements perfectly, heating them just to the limit of sipping. He handed me the first glass, and as I sipped it, sitting underneath that incredible star filled African sky, I realized it was the most delicious drink I'd ever tasted. Sipping the sweet tea, with the background noise of a small fleet of goats munching their late night supper created one of the most sublime moments of my life. I leaned back, fell asleep right there, and awoke hours later, feeling as if I was being smothered by a furry blanket. There was that noise again. Eyes opened, I realized that my head was being straddled by a goat who was simply looking for breakfast, and my face happened to be in the way of his hind feet. We had more tea that morning but nothing ever, before or since, had the magnetism of that starlit ginger tea.

So when I asked the man at Texas Coffee if he knew where is fortune really lay, he looked at me quizzically. "Ginger tea, my friend, ginger tea!" I began to describe the making of the tea.. small pots, sugar, fresh ginger.. and his eyes came alive. "You know what I'm talking about, don't you?" and of course he nodded yes. "But," he shrugged, "this is not my place" pointing to the newly polished Italian espresso machine. "What can I do?" My parting words were "Save your money from here, and open your own ginger tea salon....it will make you rich."

I'm still astonished to see how much money is made from tea and coffee in this world, and no place continues to fake me out more than the Murky Cafe in Arlington (VA). This is the place which doesn't put capuccino or espresso drinks over ice because it's against their rules. There was a big brouhaha last summer over said rules, and while they do make an astoundingly delicious latte, certain other bloggers on this blob project refuse to step foot inside the place. I recently went with Jordan for a quick cup, and saw that they haven't lost their quirkiness. One of the new touches all over Arlington, in the county's bid to put revenue raising above all other services (Burnett's First Law of Bureaucracy: Foremost among all bureaucrats' objectives is maintaining the viability of the Bureaucracy -- and thus their power/employment -- and this is done by raking in money by whatever means) they have put those Brussels style pay-parking machines outside the cafe. You walk to machine, insert quarters or credit card (a dime no longer buys you any time), and buy up to two hours of parking time, wait for a receipt which you place on the dashboard of your car. Just remember that the Belgians, notwithstanding the fact that they eat better than anyone but the Italians in Europe, haven't had a working government for something like two years. Maybe the Walloons just didn't adjust to the new parking methods. 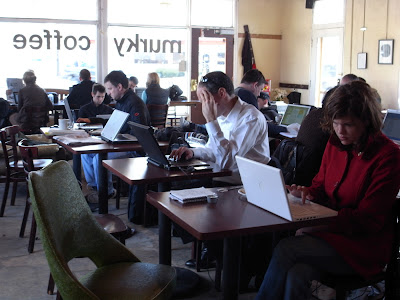 Yet, inside Murky, which sits across the street from the George Mason Univ. Law School, the promise of free wi-fi and good java keeps things very busy and very quiet. When you enter, not unlike the college version of "I'm going to the library to study... and watch for chicks", every head in the place turns to check you out. I've never actually been scoffed at, but I do challenge this method of study as perhaps a specious one. 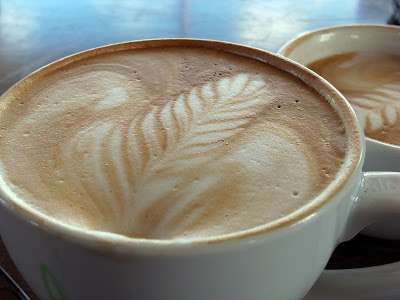 Remember, there were two kinds of people who went to the library to study: the 8 kids who went to those private desks buried deep back in the stacks, and everyone else. Here, in an atmosphere where you could actually hear a pin being dropped, people seem to sit endlessly studying contract law or perhaps deviantly, the Style page of the Washington Post. God forbid you actually try and have a conversation. In Vienna, the few coffee houses ... er ah.. Kaffee Haus' I visited seemed more ripe for intellectual engagement than mere self aggrandizment. Chat in a coffee house actually meant two or more people speaking with vocal chords, intonations and inflections, rather than simply tapping keyboards. How far we've come. 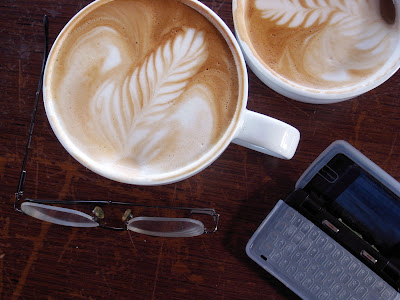 I will say that inspite of their sometimes paranoid view of how to construct coffee beverages, the Murky baristas do know how to pour the cream top into a madcap flower, leaf, or picture of Thos. Jefferson wearing a rattail. 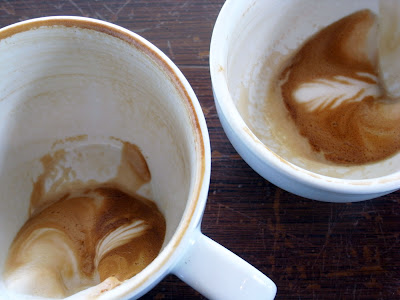 It's creamy, richly so, infusing the coffee with an almost icecreamery richness. And when you get to the bottom of the cup, you feel somehow obliged to rescue the last drams of inflated cream, resting on that distant cup recess. 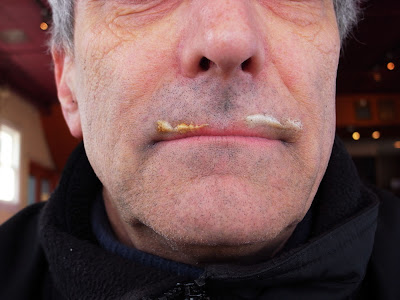 Delicious. Now, if only we could figure out a way to bring my Ethiopian friend and his knowledge of sweet ginger tea to a place like the Murky where we could post all kinds of wacky Rules. Maybe something like "no straws with our tea," or "all tea served with processed white sugar: we will not use Equal or Splenda." At least it would be our rules, and we could change them at will, inflicting our petty desires on the market place as a whole. Sounds like just the kind of new econ model for the times we live in. We're just sayin'... David 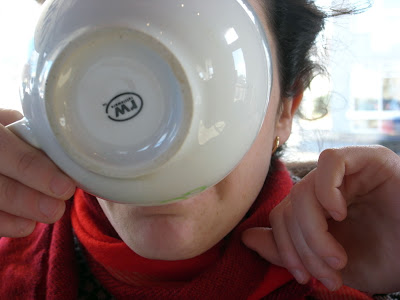 Jordan finishes a soy latte
Posted by Iris&David at 10:09 PM